How Georgia remembers its soldiers’ sacrifices 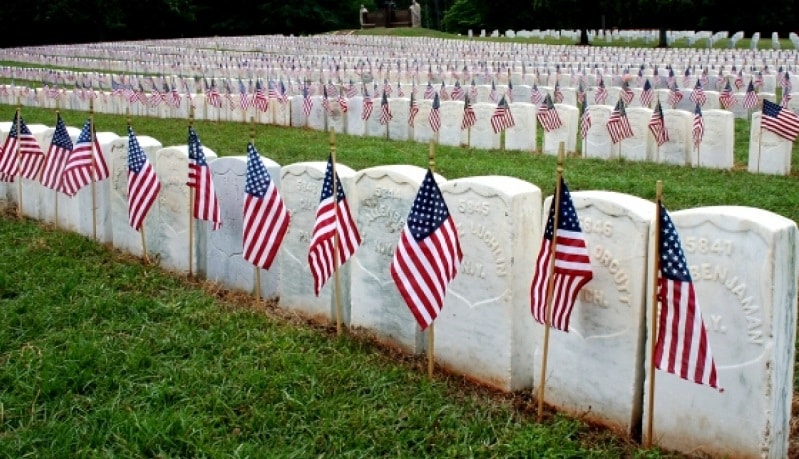 This week, LAURA MCCARTY, of Georgia Humanities, explores Georgia’s role in the evolution of Memorial Day and how Georgia remembers its soldiers’ sacrifices today.

It’s always an appropriate time to acknowledge the men and women of our military, but twice a year, we do so officially with Veterans Day and Memorial Day, both federal holidays. On the former, marked on November 11 (the date of World War I’s armistice), we turn our thoughts to all who serve or have served. On the latter, observed on the last Monday of May, we remember those who died while serving. Many Georgians commemorate these holidays with ceremonies, services, or other observances — a testament to our state’s strong military heritage, derived in part from Georgians who have played significant roles in the evolution of Memorial Day and the state’s long tradition of recognizing military sacrifice.

There are competing claims about the “first” Memorial Day, which evolved out of efforts to bury and mark soldiers who died in the Civil War. On May 1, 1865, in Charleston, South Carolina, African Americans reburied Union soldiers on land that was part of a temporary prison site, but had formerly been a park. They put up a fence and whitewashed it, marking the graves with a sign that proclaimed “the Martyrs of the Race Course.” A procession of schoolchildren and women brought flowers to decorate the graves and sang such songs as “John Brown’s Body.”

About a year later, Columbus, Georgia, resident Lizzie Rutherford and her colleagues in the Soldiers Aid Society began to tend graves in Linwood Cemetery soon after the end of hostilities in that area. By March 1866, they had written to other ladies’ organizations across the South encouraging them to decorate graves on April 26, the date of Joseph Johnston’s surrender. In 1868, the Grand Army of the Republic (an organization for male Union veterans) called for Decoration Days to be held at the end of May, possibly because that was a time period in which flowers were likely to be in bloom in the North. 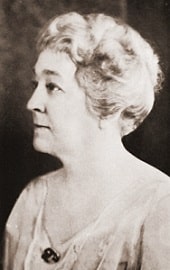 The poppy is an international symbol of remembrance of military sacrifice, and its role in the evolution of Memorial Day is thanks to Walton County native Moina Michael, who was inspired by Canadian doctor John McRae. While serving in Belgium during World War I, McRae immortalized the poppy in the poem In Flanders Fields.” In the poem, poppies bear witness to the sacrifice of the war dead: “In Flanders fields the poppies blow / Between the crosses row on row.”

Michael was inspired to make and sell silk poppies to raise funds to care for veterans. She also wrote her own poetic response, “We Shall Keep the Faith.” In 1920, the National American Legion adopted the poppy as their symbol of remembrance. A French woman, Anna E. Guerin, took the idea back to Europe, where organizations such as the British Legion continue the tradition. In 1924 the Veterans of Foreign Wars registered the term “buddy poppy;” the organization continues to offer poppies (assembled by disabled veterans) to support veterans’ care.

Some of Georgia’s largest Memorial Day ceremonies are held at cemeteries. The tradition of burying veterans in national cemeteries dates back to 1862, when President Abraham Lincoln signed legislation to authorize the purchase of “cemetery grounds.” The Marietta National Cemetery, established in 1883, will host the National Memorial Day Association of Georgia’s annual observance on May 29 at 12:00 p.m.

In response to an increasing demand for cemetery space, the Georgia National Cemetery in Canton, the state’s second national cemetery, opened for new burials in 2006. Georgia developer, philanthropist, and World War II veteran Scott Hudgens donated 775 acres of land in Cherokee County to ensure that Georgia’s veterans could rest together. The cemetery will mark Memorial Day on May 27 at 10:00 a.m. 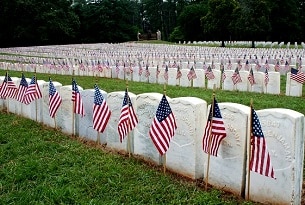 Andersonville National Historic Site evolved from Civil War prison to cemetery due to the 13,000 Union prisoners buried there. Until the 20th century, Andersonville’s cemetery was a site of local African Americans’ annual May observance of Memorial Day and Emancipation Day. Today, Memorial Day observances are one of the site’s most significant events, involving 300 volunteers who place flags on each grave and raise the Avenue of Flags. The site will host its observance and wreath laying ceremony on May 28 at 2:00 p.m.

The National Infantry Museum, located at Fort Benning, will observe Memorial Day May 27-29, with a World War II living history presentation as well as a camp for children and a dedication ceremony for memorial pavers along the Heritage Walk.

On September 23, you can honor the mission of Moina Michael at the Poppy Festival, held annually in Good Hope, Georgia.

Georgia Humanities is a partner of the Georgia World War I Centennial Commission and works with educators across the state to promote reading and discussion programs for veterans.