By Maria Saporta and Doug Sams
Published in the Atlanta Business Chronicle on November 21, 2014

The Robert W. Woodruff Foundation is giving the university $22.8 million to transform the three-story building that used to serve as the SunTrust bank lobby at the corner of Edgewood Avenue and Park Place into a media production center. 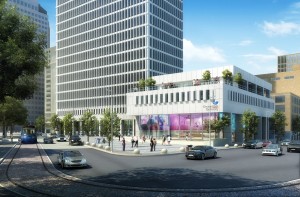 The center will provide areas for education, research, entrepreneurs and partnerships with the Georgia film, music, games and arts industries.

The large windows will permit people walking by to see students working on their projects. Drop down screens also will provide the ability to projects films and programs on the side of the building – which officials inside the university have been calling “the Cube.”

It will house the university’s new Creative Media Industries Institute, an interdisciplinary center introduced this fall to build on the university’s strengths in media production, research, design, the arts, music management and digital publishing by preparing students for careers that transcend traditional degree programs.

Russ Hardin, president of the Woodruff Foundation, said the gift will have a multi-layered impact on both the city and the state.

The Creative Media Industries Institute project caps off a multi-year initiative by Georgia State to anchor the east side of Woodruff Park – an area where the university has been making a $266 million investment.

Becker said the idea for the Creative Media Industries Institute was born about two years ago in a meeting with faculty members. David Cheshire, chairman of the Department of Communications, suggested that if they wanted to do “something really big and crazy,” they should consider transforming the “Cube” into a cutting edge space for the fast-growing and ever-changing media industry.

“When David put out this idea, it captured our imagination because it was really a unique opportunity to grow in an area where we were already strong,” Becker said. “It had unlimited potential to make this a showcase place for downtown.”

Cheshire, who is stepping down as chairman of the Department of Communications to become director of the new media institute, said the Cube seemed to be perfectly suited to bring production, entrepreneurs, research, education and training at one of the main front doors of the university. Its location next to other colleges also makes it easily accessible for interdisciplinary ventures.

Looking south at the redone

“It’s right for so many reasons,” Cheshire said. “All around us, we have got to scramble in higher education to adjust to changes in the media industry and how we change the way we educate students.”

Cheshire added that the “research we have in mind is outwardly focused,” so the fact that “people will be able to look into the windows” will reinforce closer ties to downtown, the city and the larger community.

In addition to the Woodruff Foundation gift, the Georgia Research Alliance has made a financial commitment to the center to provide equipment for Georgia State’s Creative Media Industries Institute.

“The media industry in Georgia is experiencing tremendous growth and it is essential that we aid in providing opportunities for research, preparing the workforce and launching new companies,” said Mike Cassidy, president of the Georgia Research Alliance, in a statement. “As an early investor in Georgia State’s Digital Arts and Entertainment Laboratory, we have seen significant results from Georgia State’s digital and film programs. We believe the Creative Industries Institute will be a major step forward in supporting this rapidly growing industry.”

The Woodruff gift will not only pay for the transformation of the Cube but for two other nearby projects — the enhancement of the lobby and the facade of the Annex building, which houses incubator space for companies with university ties; and to tear down the Bell building on the other end of the block.

Georgia State also intends to implement major plaza and streetscape improvements around the center to make the streets more pedestrian-friendly. The new Atlanta Streetcar will travel right in front of the building.

The media center will complete an academic corridor Georgia State has created on Park Place across from Woodruff Park.

With its purchase of 55 Park Place, the university has created new homes for the Robinson College of Business and the Andrew Young School of Policy Studies. Georgia State’s College of Law will relocate to a newly constructed building at Park Place and John Wesley Dobbs Avenue in the spring.

The College of Arts and Sciences already is in its new home at 25 Park Place adjacent to the Cube in what used to be Trust Company Tower.

“The clustering of these programs around Woodruff Park will create an exceptional setting for educational and entrepreneurial collaboration,” Becker said.

A.J. Robinson, president of Central Atlanta Progress, said the investments by Georgia State and the Woodruff Foundation continue to bolster the area around Woodruff Park.

“This is happening at a time when real estate on the southern end and the western side of Woodruff Park are undergoing new renovations and new uses,” Robinson said. “Throw in the opening of the Atlanta Streetcar, and it’s easy to say that the development around the park is at an all-time high. Georgia State continues to lead the way on adaptive reuse of downtown buildings.”

Cullen Hawkins, a principal with Encore Real Estate Development, which bought the Olympia building at Five Points last year, credited Georgia State for most of the foot traffic around Woodruff Park and for being the biggest catalyst for new investment in this part of downtown.

“The biggest thing to me is the amount of money that Georgia State is pumping into the area to keep people living downtown,” Hawkins said. “I think anyone who has watched this area is struck by how quickly it has changed in such a short period of time.”

Dora Din, leasing and marketing director with the Creations Group, one of the partners that bought the 30-story 34 Peachtree tower in 2013, said the “area was neglected for so many years.”

In the 1980s and 1990s, companies left Five Points and moved to Midtown, Buckhead, the Perimeter or farther north. In the early 2000s, reverse migration back to the city began, but it was limited by the steep recession near the end of the decade. In the past four years, that has gained momentum as Central Atlanta Progress and Georgia State have been working to on plans to attract new investments and renovations of existing towers. Georgia State also was able to buy more buildings and land because of the downturn in real estate prices.

“We were so encouraged by the thought leaders from GSU,” Din said. “Slowly but surely you saw plans for the law school. And, then projects such as the Atlanta Streetcar came together.”

As Din said of the Woodruff Park area: “This has become the next emerging arts and creative enterprise community.”