On June 15, Boys & Girls Clubs of America (BGCA) students, families and leaders gathered at the Georgia Aquarium to celebrate exemplary students of the southeast — all with a backdrop of beluga whales, manta rays and whale sharks gliding through the blue waters.

Sixteen southeast students traveled to Atlanta for BGCA’s 2022 Southeast Youth of the Year Celebration. All were eager to see which two would advance to the next round with the chance to be named the National Youth of the Year.

Youth of the Year is a recognition program that began in 1947, highlighting extraordinary “club kids” who value leadership, service and academic excellence. 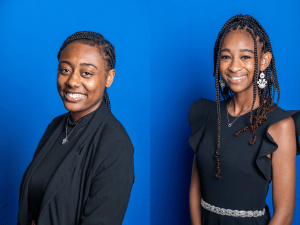 (L to R) Aliayah S. and Ahsha B. (Photos by Jenni Girtman, courtesy of Boys & Girls Clubs of America.)

This year, Aliayah S. of Central Georgia was honored as Georgia Youth of the Year. Aliayah has been a club kid for 12 years, with plans to attend Georgia State University with a focus on journalism.

Ahsha B. of Kings Bay Naval Submarine Base was recognized as Georgia Military Youth of the Year. She has been with the Club for three years and aims to attend Regent University to study marketing.

Both high school seniors were selected for their dedication and involvement with the Club and their education. Aliayah served in her school’s Key Club, Future Business Leaders of America and Student Council, and Ahsha logged 564 hours of volunteer community service.

Throughout the year, students are recognized as candidates through programs in their local Clubs or affiliated Youth Centers on military bases, progressing through state and regional events until one student is named the Youth of the Year. This recognition is a big deal amongst the BGCA family, as the highest recognition a club kid can receive.

During the program, the two Georgia students were joined by 14 other stand-out students who took the stage to share their love for the organization and the mentors they met along the way.

Ahsha shared her experience with the BGCA-affiliated Youth Center, which she joined after struggling to find community following her family’s move from Virginia Beach to Georgia’s Camden County.

“There are millions of our military-connected youth who are unsure of their stories, how to tell them or who will even listen,” she said. “My story is one of those stories. Although my stepdad and older brother are in the Air Force, I never had a traditional military teen experience. I didn’t live on base, nor had I [moved] around the world. However, moving became a reality for me when my stepdad delivered the shocking news that we were moving to Georgia.”

Ahsha continued: “For the very first time, I was the new kid, and this move changed my life forever. Seeing my social struggles, my parents ‘strongly encouraged’ me to give my local youth center a try, which I did begrudgingly. My parents set up a meeting with the advisor, Ms. Maria, who would later have a tremendous impact on my life. She told me all about BGCA’s amazing scholarship and public speaking opportunities. Unsure of how God wanted me to use my talents, I began to discover new interests. So it is now time for our military-connected youth to stand up and tell their stories.” 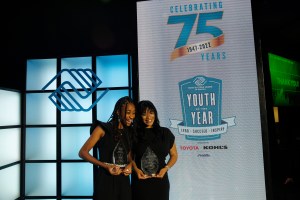 Winners Ahsha and Asha move on to the national competition. (Photo by Jenni Girtman, courtesy of Boys & Girls Clubs of America.)

At the end of the night, two students were selected to progress in the competition, Georgia’s Ahsha and Virginia Youth of the Year Asha H.-R.

Atlanta Mayor Andre Dickens joined the festivities to praise the efforts of BGCA, which is headquartered in the city.

“The Boys & Girls Clubs of America holds a special place here in Atlanta and is such an integral part of our city,” Dickens said. “There’s so much going on in the world right now that affects all of our youth, and it’s so important that we have a safe and inclusive environment for our children; that’s what the Boys & Girls Clubs provide. I’d like to congratulate all of this year’s recipients and these extraordinary candidates. I’m so proud of each and every last one of you.”

The program also served as a fundraising event for BGCA — and donations are still rolling in — with a goal of $125,000. 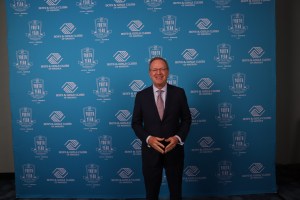 “Our finalists work hard to earn their place on this stage. I am confident that these remarkable young people who embody the values of leadership, service, academic excellence and healthy lifestyles will continue to build upon the legacy of Youth of the Year,” President and CEO Jim Clark said. “With your support, we strive to support every young person in the Southeast and across our country, helping them access equitable opportunities that enable them to develop as thriving citizens with great futures ahead of them.”