Back in 2000, then Georgia Tech President Wayne Clough felt like an orphan in Atlanta.

The boundaries of Central Atlanta Progress, the downtown business organization, ended at North Avenue and did not include the Georgia Tech campus.

And the western boundary of the Midtown Alliance ended at the Downtown Connector.

In a videotaped message at a recent Technology Square 10th Anniversary Symposium — “A Decade of Innovation,” Clough said he thought at the time: “Nobody wants to claim Georgia Tech.”

That was a problem for the institution, which had been gaining national and international prominence but was not as well-connected in its hometown as it should be.

“We had cut ourselves off from those areas of Atlanta,” Clough said.

So Georgia Tech made a strategic decision — to jump over the interstate. Georgia Tech and its foundation purchased several blocks of “dilapidated” land along Fifth Street between the Downtown Connector and West Peachtree Street. At one point, a member of the foundation told Clough: “You are thinking too small. Change and transform the neighborhood.” 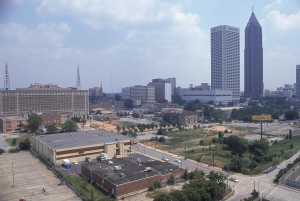 Georgia Tech is celebrating the 10th anniversary of Technology Square — the multi-block, pedestrian-oriented development that opened on Oct. 23, 2003 and has become an award-winning project for the university.

In 2007, Georgia Tech had a grand opening of the Fifth Street Bridge Park that added green space on both sides of the overpass — making the walk from the west side of campus to Tech Square a much more pleasant experience.

Georgia Tech President Bud Peterson is amazed that Tech Square was less than six years old when he came to the university in April 2009. During his presentation, he showed what the area looked like at ground-breaking on September, 2001. Only two years later, the area was totally transformed.

Catherine Ross, director of Georgia Tech’s Center for Quality Growth and Development (which is located in Tech Square), said that she remembered what Clough said when Georgia Tech won a national Urban Land Institute award in New York City for the development. 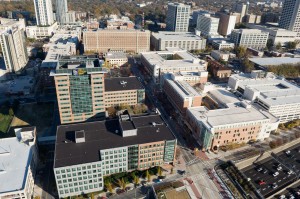 AFTER: Photo of Tech Square at the grand opening on Oct. 23, 2003 (Photo: Courtesy of Georgia Tech)

“Universities have grown to be such large institutions that they have a moral and practical obligation to improve their communities,” Clough said at the time.

“How we connect these other hubs is critical,” McGowan said. “Geography is important. Collaboration is critical.”

Everyone on the panel agreed that quality of life and location were two ingredients that were essential to have an innovative environment that attracted creative entrepreneurs. Tech Square has provided the kind of walkable lifestyle that often appeals to innovators.

But Georgia Tech did get crosswise with the Midtown and preservation community when it insisted on demolishing two-thirds of the historic Crum & Forster building on Spring Street adjacent to Tech Square.

“We are pulling Georgia Tech into the city — on both sides of the highway,” Reed said. “They’re going to be building a $100 million super computer building, although I got into a bit of trouble with preservationists in Atlanta. But I will make it up to them.”

When the panel was asked about the possible tension between Georgia Tech’s growth and the community, Ross referred back to Clough’s ULI quote.

“It’s my hope, and I believe Georgia Tech has very good intentions,” Ross said. “It doesn’t mean we are always on the right side.”

She said the solution will be to have more direct conversations with the community, the Midtown Alliance and to explore the integration of technology with the Midtown area.

McGowan said he thought saving one-third of the Crum & Forster building was a “good solution” because it would lead to the creation of thousands of jobs.

Looking at the before-and-after photographs of Tech Square, it is striking how much of a transformation that has taken place — all of it for the better — with the one sad exception of a crippled Crum & Forster.

Previous Article
Men Also at Risk for Osteoporosis
Next Article
Brookings: Metro Atlanta a key center of trade but most is domestic