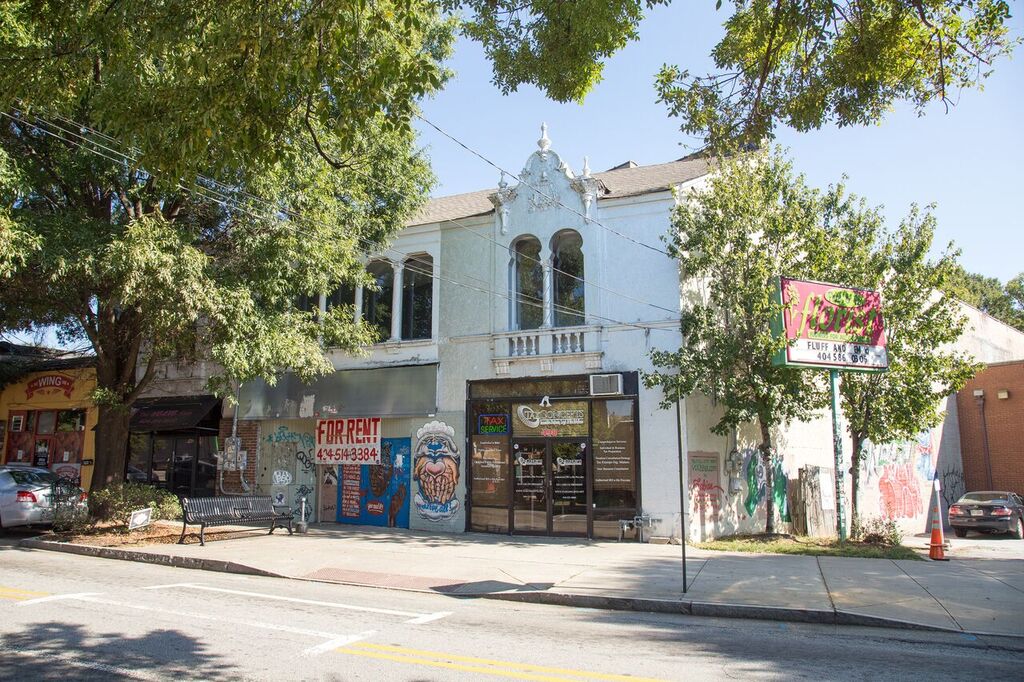 Two historic theaters in Atlanta made it on the Georgia Trust of Historic Preservation’s 2019 Places in Peril list – the Madison Theatre in East Atlanta and Rhodes Center in Midtown.

The formal presentation of the list will occur Wednesday evening at a reception at Rhodes Hall at 1516 Peachtree St. N.W.

They were two sites are among the 10 places that made the list, which includes the Juliette Gordon Low Birthplace Garden in Savannah and the Springfield Log Cabin School in Union Point.

“The list highlights the opportunities,” said Mark McDonald, president and CEO of the Georgia Trust. “And it is an opportunity for the Trust to be able to focus its preservation efforts on a few important projects.”

McDonald said Rhodes Center is one of the first, if not the first, strip shopping centers in the state of Georgia. The buildings the Trust is hoping will be preserved is all that’s left of what used to be a bustling shopping area with the now-closed Rhodes Theatre. The building also is directly across from Rhodes Hall, the home of the Georgia Trust.

“It is a classic case of demolition by neglect,” McDonald said. “We are trying to encourage the owner to preserve and rehabilitate it. We are in a dialogue with John Dewberry (who owns the property).”

The Madison Theatre in East Atlanta was built during the same period as Atlanta’s treasured Fox Theatre.

“We believe the Madison Theatre could be the anchor for East Atlanta that the Fox has been for Midtown,” McDonald said. “It is fairly intact, and it can be rehabilitated. It was nominated by a neighborhood group, so there’s support in the community.”

The 2019 list is the Trust’s 14thPlaces in Peril list, which was designed to raise awareness about Georgia’s significant historic, archaeological and cultural resources, including buildings, structures, districts, archaeological sites and cultural landscapes that are threatened by demolition, neglect, lack of maintenance, inappropriate development or insensitive public policy.

By putting places on the list, the Trust encourages owners and individuals, organizations and communities to employ proven preservation tools, financial resources and partnerships that will lead to reuse, reinvest and revitalize historic properties that are in peril.

“About 85 percent of the places that have been on our Places in Peril lists have either been saved or have made some kind of progress,” McDonald said.

McDonald said that unfortunately, the Kolb Street House in Madison, a circa 1850 house used as a prison camp for Union soldiers and later as a Confederate hospital, was lost to fire in 2017.

Designed in 1928 by Atlanta architect William J.J. Chase, the Colquitt County Arts Center originally served as the old Moultrie High School. After being vacated by the Colquitt County Board of Education in the 1970s, the building was rehabilitated into an arts center, which has become the hub for cultural opportunities in the county. The Arts Center is threatened by its current state of disrepair and ongoing maintenance needs. While many campaigns have been orchestrated to raise funding, there is still a significant need to prevent further damages and deterioration. 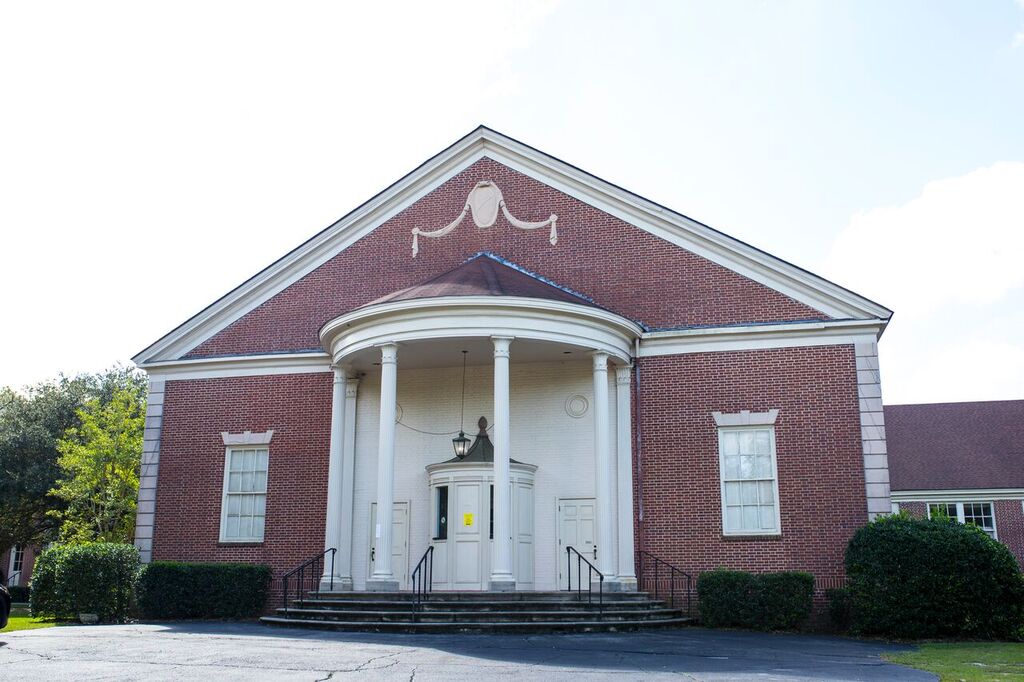 Dating to 1920, the Glennwanis Hotel in Glennville was once one of the grandest hotels in rural Southeast Georgia. Notable for the time, each guest room had electric lights, steam heat and running hot and cold water. Established to cater to out-of-town guests, the hotel eventually became Glennville’s premier social venue and a hub for community life. The greatest threat to the Glennwanis Hotel is severe deterioration after the previous private owner converted large parts of the building into efficiency apartments while failing to properly maintain the structure. At this point, the hotel’s future remains uncertain. 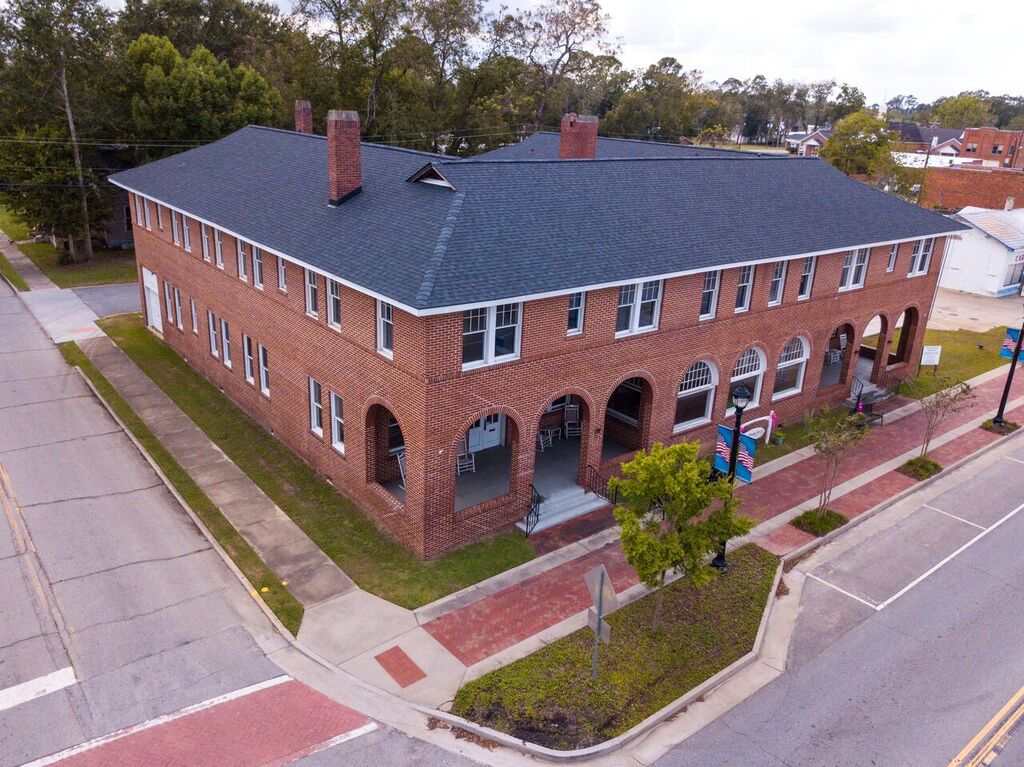 The Huston House, located on Butler Island, was constructed in 1927 by Colonel T.L. Huston, a former co-owner of the New York Yankees. Butler Island, originally a rice plantation dating to the 1790s, was converted to a dairy and lettuce farm by Huston in the 20th century. After his Huston’s death in 1938, the property was purchased by tobacco heir R.J. Reynolds, Jr. Today the property is owned by the Department of Natural Resources Wildlife Division. The Huston House is currently vacant with no long-term plan for use or maintenance. Changing climate and the severity of recent hurricanes have exposed the house to the elements. Without a plan in place, these threats will lead to continued deterioration of the building. 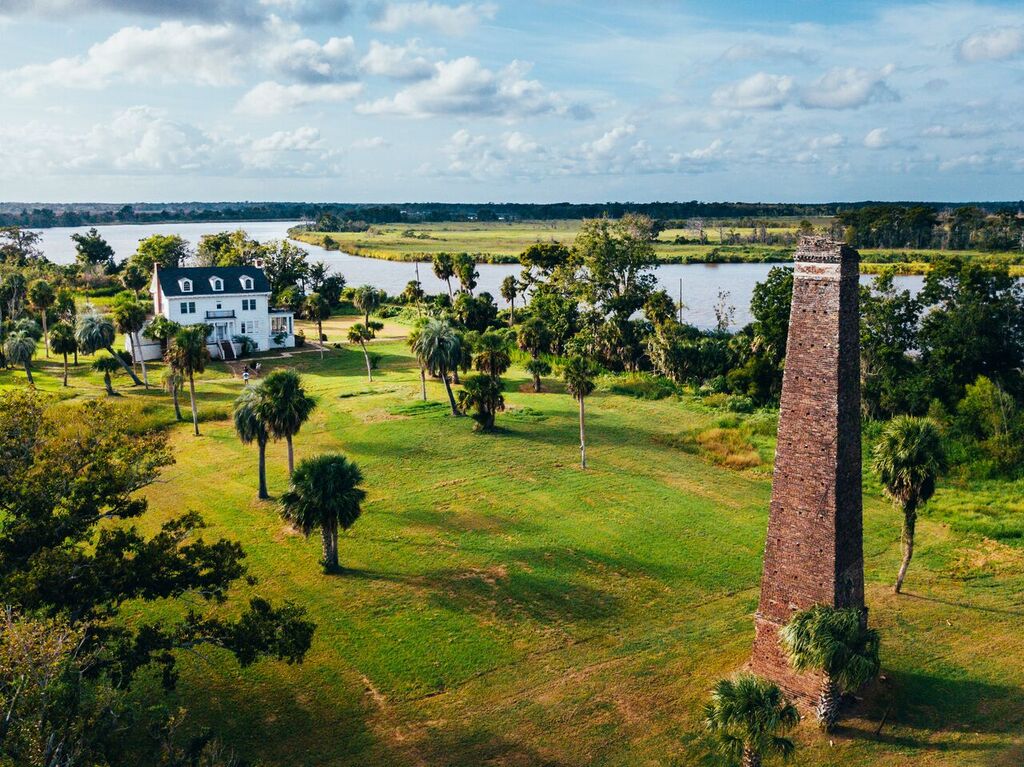 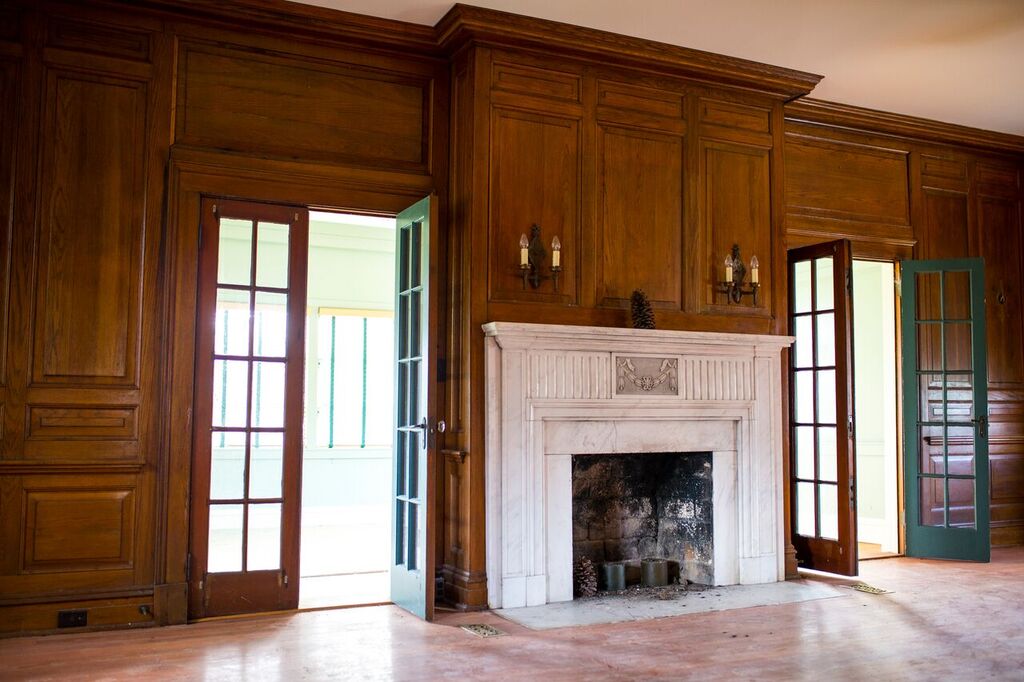 In the mid-1950s, Clermont Lee, Georgia’s first registered female landscape architect, was commissioned to design a garden for the birthplace and girlhood home of Juliette Gordon Low, the founder of the Girl Scouts. Renowned for consulting on historic landscapes throughout the state, Lee designed a historically appropriate garden that included plantings that were popular during Low’s childhood. Today the garden and Lee’s design are under threat of being significantly altered or potentially demolished. Recently the Birthplace unveiled a new site plan that includes changes to the garden, but the garden’s fate remains unclear. 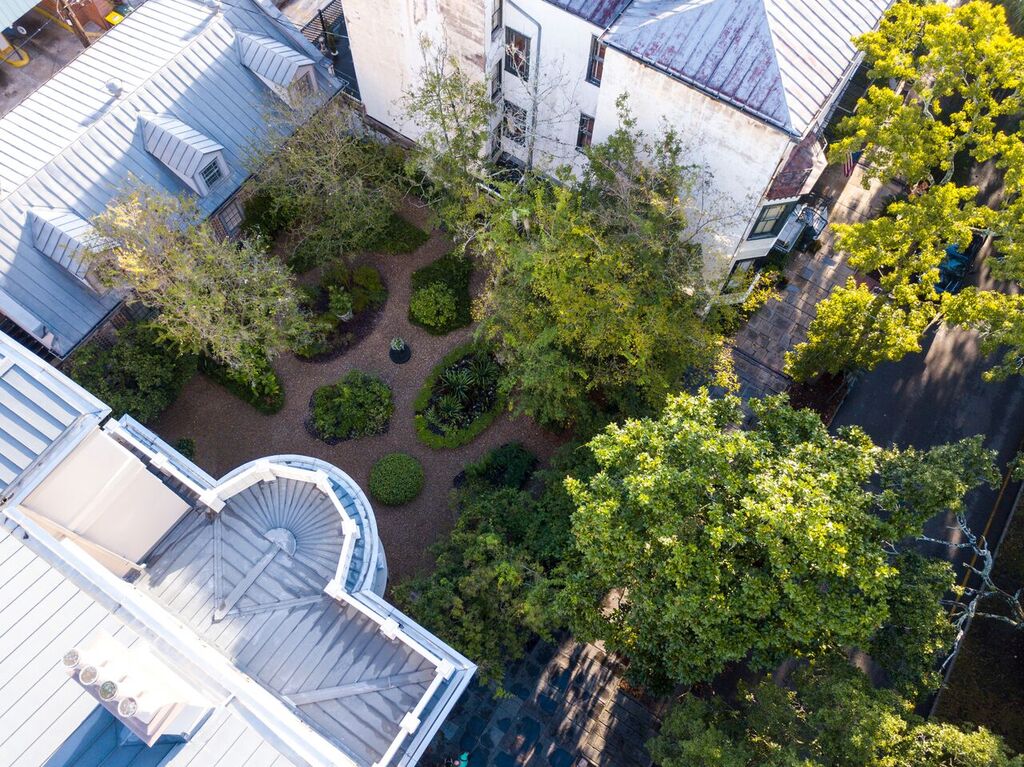 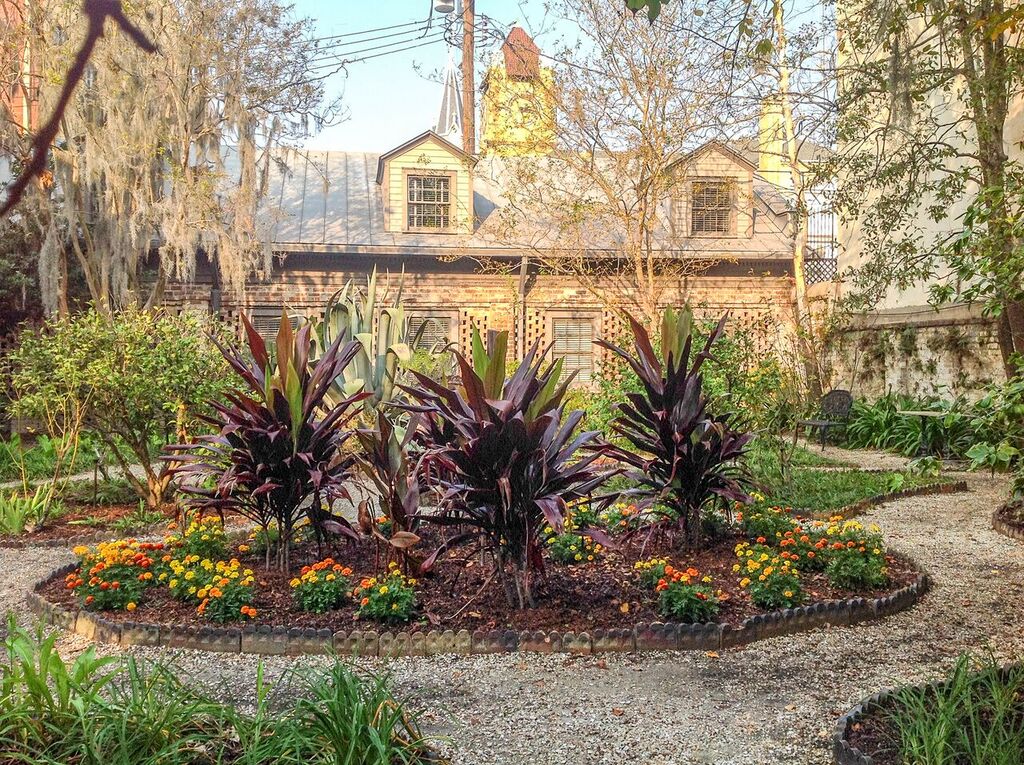 Opened in 1927, the Madison Theatre in East Atlanta was designed by local architects Daniell and Beutell in the popular Moorish Revival style. With over 600 seats, lavish furnishings and air conditioning, the theater ranked as one of the finest and most expensive neighborhood theaters in the South at the time. As with many neighborhood theaters, the Madison helped to bridge the gap between the silent and “talkie” movie eras, serving as a community cultural resource and operating as a theater until the 1960s before later being used as a church. Since the 1980s, only smaller portions of the building have been used for commercial purposes while the larger theater space has been used for storage. There is significant potential for rehabilitation, but there are no plans to bring the theater back to its original glory.

Founded in 1866 by freed people raised in the Gullah Geechee tradition, Needwood Baptist Church is one of the oldest African-American churches in the state.  The church building dates to the 1870s and likely sits on land that was once part of Needwood Plantation. The adjacent school, built in 1907, remained in use for the children of the congregation until the 1950s, when Georgia created Equalization Schools. The Needwood Baptist Church and School are threatened by their current state of disrepair, including failing roofs and increased water damage after recent storms, despite many families, descendants and church members working to save them. 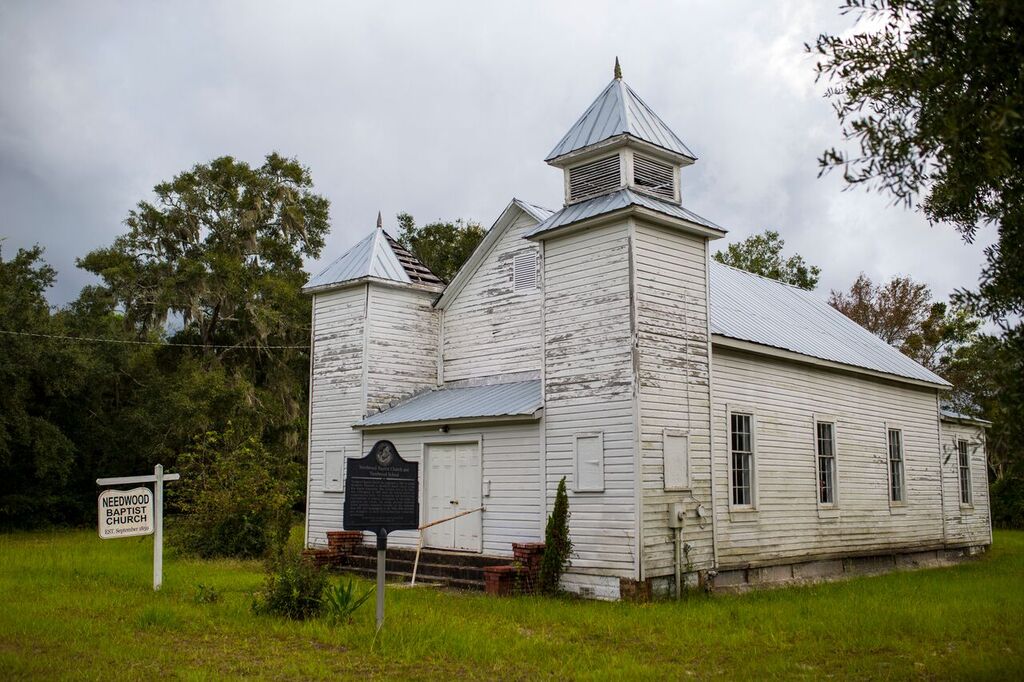 Designed in 1937 by noted Georgia architects Ivey and Crook, Rhodes Center was Atlanta’s first strip shopping center and one of the largest real estate developments in Atlanta during the Great Depression. Rhodes Center was originally made up of three one-story buildings that ran along the north, south, and west sides of Rhodes Hall and were faced with white Georgia marble. Only the South building, which was home to the Rhodes Theatre, remains. The building is threatened by its current state of disrepair after sitting vacant and suffering neglect for many years. Despite a thriving market for commercial real estate in Midtown Atlanta, there are no plans for its rehabilitation. 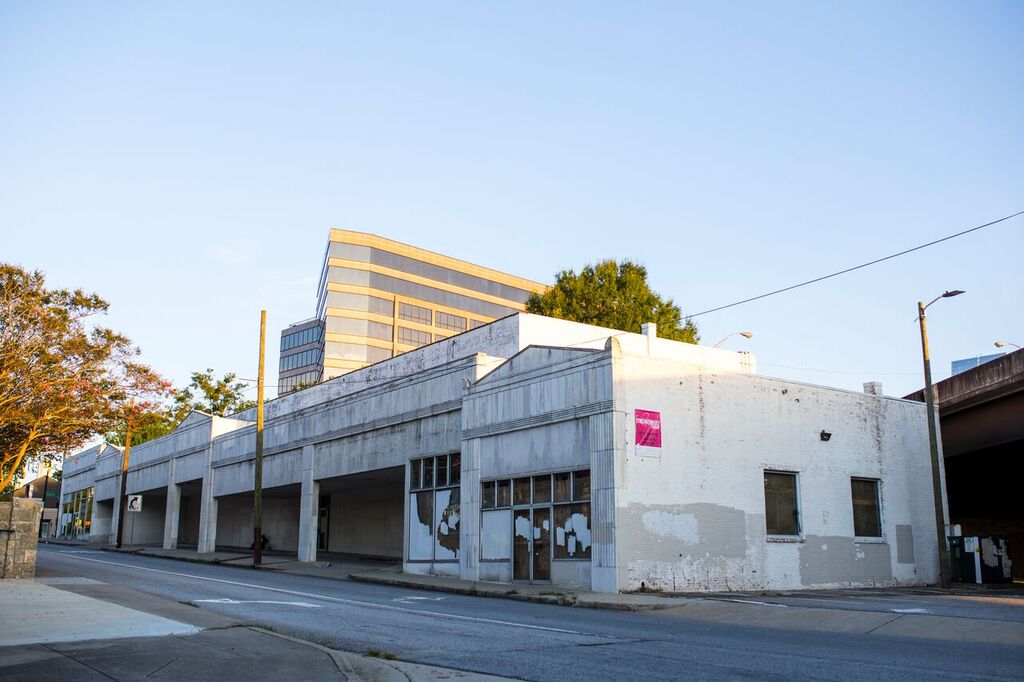 The Springfield Log Cabin School was built in 1935 for the African American students in the community. African American property owners cut logs from their properties to build the school, and the finished product resembles the plan of some Rosenwald Schools. In 1965, the Springfield Log Cabin School became the only known Freedom School in Georgia. Today the Springfield School is in immediate danger of collapse due to water flow beneath the building. The resulting erosion has contributed to a damaged and destabilized foundation, causing significant sagging. 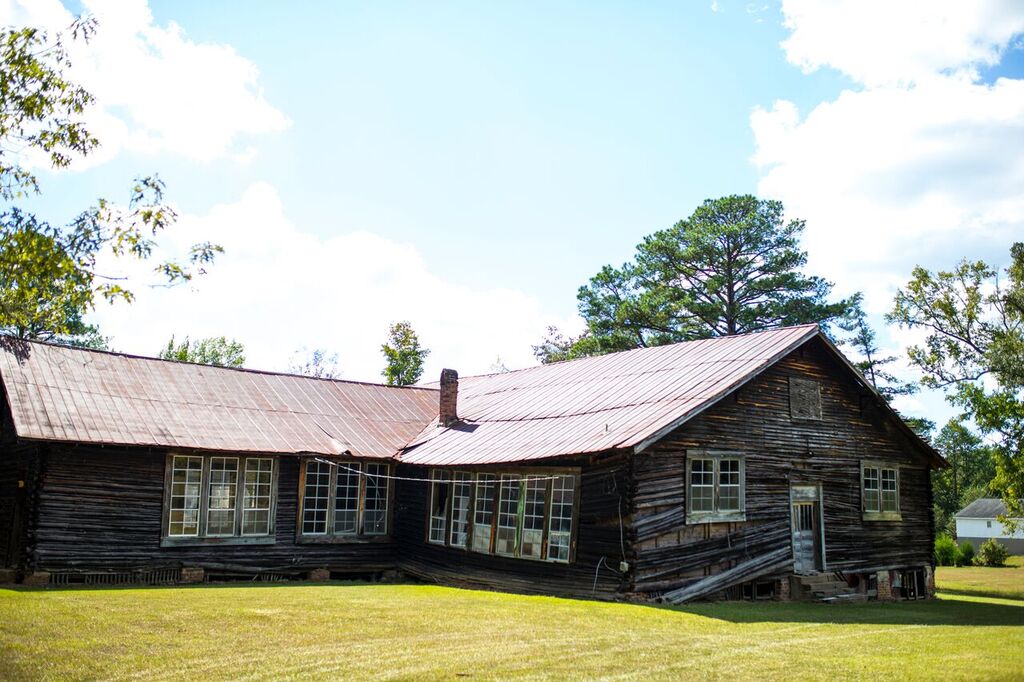 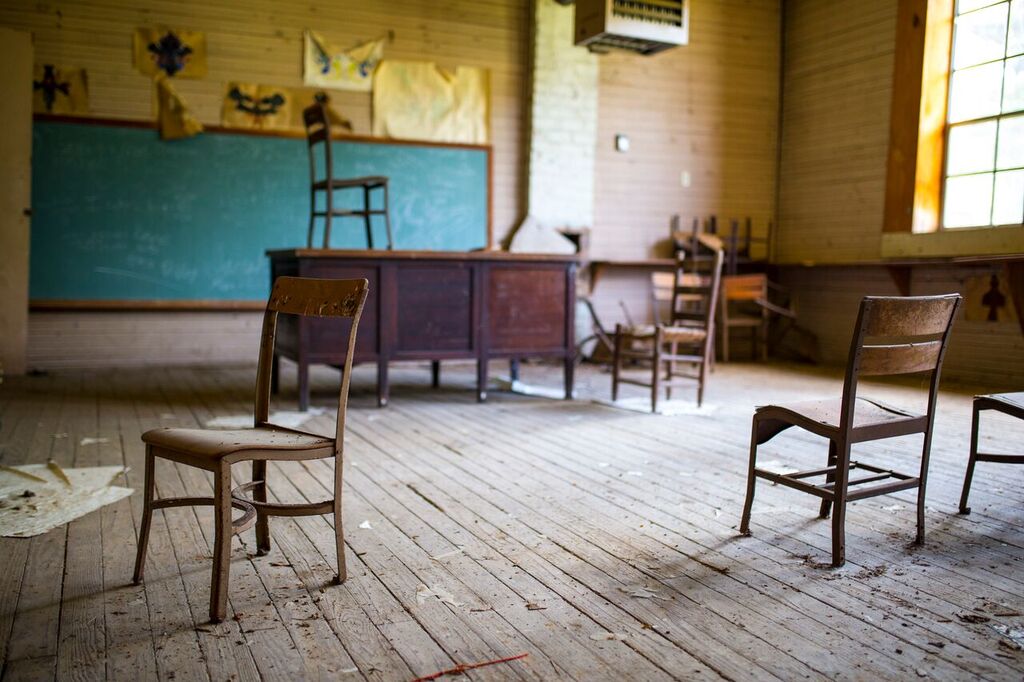 Constructed in 1917 to serve as a hub for the residents of the Stark Textile Mill community, the Stark Mill Community Building provided a variety of social and recreational outlets popular at the time. The building was designed by noted textile mill architectural firm Lockwood Greene and is a unique example of the Tudor Revival style used in a textile community building. The building has been abandoned for many years and has been threatened with demolition due to its neglect. 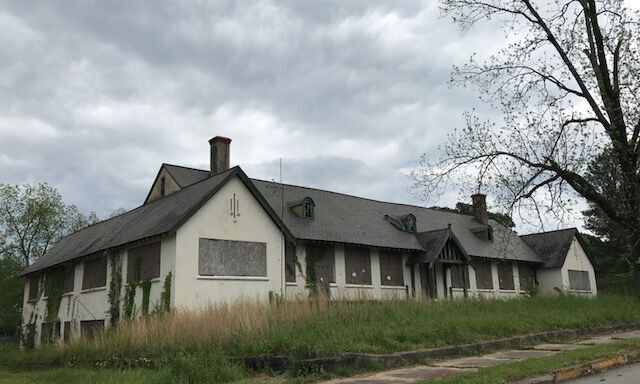 This rambling 18-room house is an excellent example of Victorian architecture although portions of the house date to earlier periods of construction. The land on which the house sits was first owned by George Walton, a Georgia Signer of the Declaration of Independence. The house became known as “The Cedars” during the Victorian era, when many significant additions and alterations took place, and has been home to several notable Washingtonians throughout its history. The building has fallen into disrepair, with no discernible improvements made since the early 2000s, and is in significant danger of demolition by neglect. 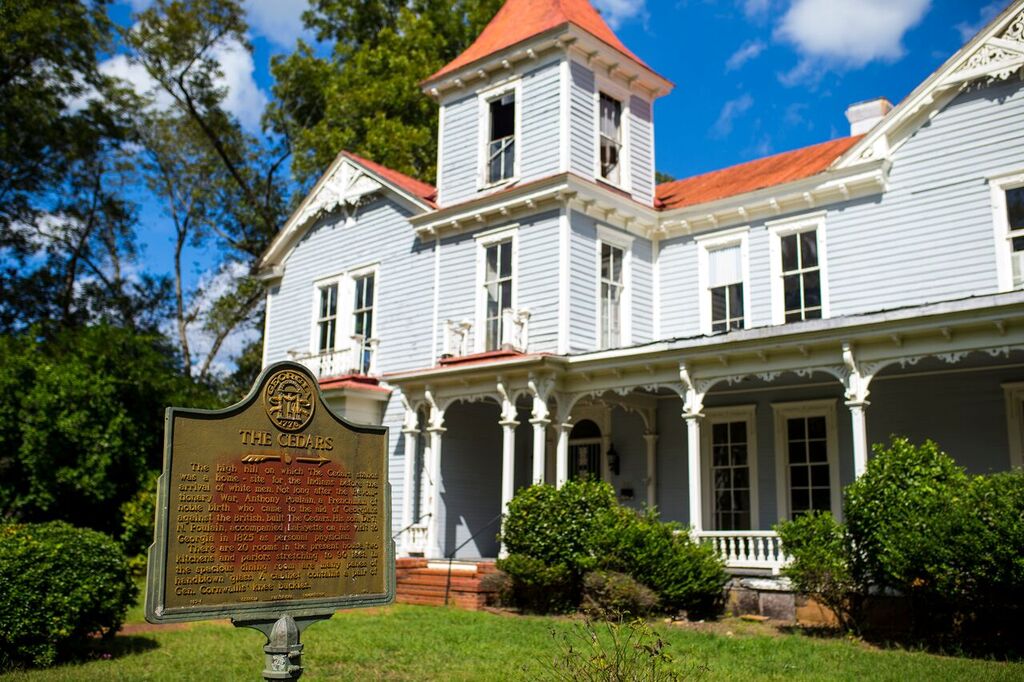