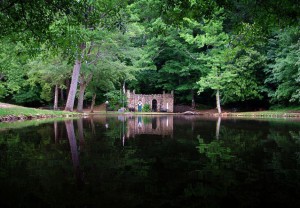 About 75 miles from downtown Atlanta and about 12 miles south of Rome is one of the most beautiful settings anywhere: Cave Spring. Taking its name from an aquifer that surfaces through a limestone cave, this town of about 1,200 sits in beautiful Vann’s Valley of Floyd County in north Georgia.

The community was settled in the late 1820s as migrants from Augusta encroached on land still occupied by the Cherokee. Drawn by the gold rush of 1829 but also by the fertile valleys, early residents showed themselves to be industrious settlers whose priorities of learning, productivity, worship, and service would shape future generations.

The old Fairview School, built in the 1920s, was part of the Rosenwald Schools initiative to provide schools for African American children. Credit: Northwest Georgia News

In 1846 the state allocated $5,000 for the Georgia School for the Deaf, housed in a modest log cabin structure. The school’s founder was O. P. Fannin, an educator at Hearn Academy, which also shared its land with the new school.

The Hearn Academy in Cave Spring, Georgia, which was founded in 1838. Credit: Cave Springs Historical Society

The School for the Deaf was the eleventh residential school of its kind to be founded in the United States, and has been in continuous operation (except for a brief period during the Civil War era) ever since. Presently, Cave Spring is engaged in a major restoration of the school’s early buildings on a campus that has grown to include 480 acres of land. Many townspeople are adept at communicating in sign language, which is not surprising given the school’s importance to the local economy.

Two other recent projects highlight the community’s appreciation for its past. One is the restoration of the 1810 Vann Cherokee cabin, a site on the Trail of Tears National Historic Trail. Dianna Edwards, president of the Cave Spring Historical Society, says, “That’s an impressive honor. It literally puts that cabin on a national Trail of Tears map.” The second project is the planned restoration of the Fairview-Brown Colored School campus, a Rosenwald School. (The Fairview-Brown campus was a product of African American initiative in the 1920s, and the partnership of philanthropist Julius Rosenwald and educator Booker T. Washington.)

Cave Spring is a bright presence in Georgia, an industrious, historic, and welcoming community nestled in the valley and ridge region of the state, and well worth a visit. Of special interest is a two-day symposium in November that will showcase the richness and depth of education the children received at the Fairview School in Cave Spring. In conjunction with Berry College and the Fairview-E.S. Brown Heritage Corporation, descendants of Julius Rosenwald and Booker T. Washington will be featured speakers. To learn more, visit the Fairview-Brown website: http://www.fairviewbrown.org/news-events.html

Previous Article
Georgia’s university system noted for cost-cutting efforts, but budget requested from Legislature still rising
Next Article
The watch on the frontier of infection