Georgia’s education system: Much better than we hear about 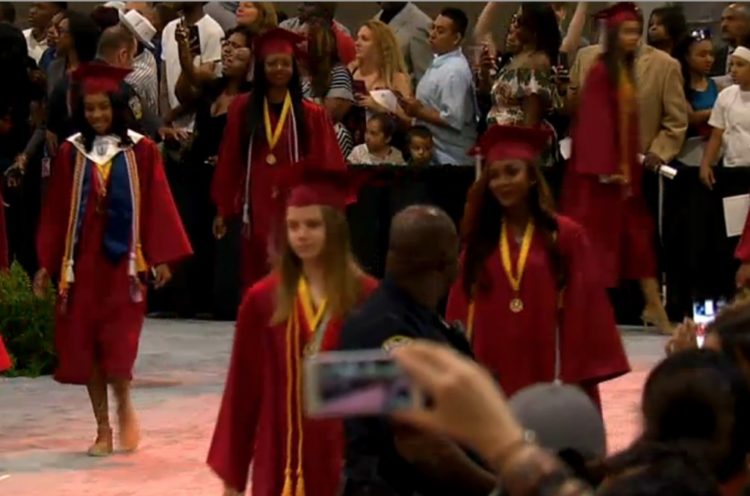 The Class of 2017 that was graduated from Atlanta's Grady High School is part of the 10 percent increase in Georgia's high school graduation rate since 2012. Credit: atlantapublicschools.us 10 percentage points since 2012

By Guest Columnist MATT CARDOZA, communications director for the Georgia Partnership for Excellence in Education

When you hear Georgia is last in education, that is typically based on one measure – SAT results. Like many education measures, apples-to-apples comparisons are difficult to glean from SAT results. For example, the top-ranked state in the nation based on the most recent comparable (2016) SAT results was Illinois. Only 3 percent of their students took the SAT, compared to 67 percent of Georgia students. 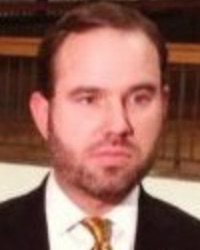 However, if someone insists on using the SAT to rank states, Georgia is far better than “last in the nation.” While not exactly where we want to be, we ranked 36th in the nation on the 2016 comparison, with 67 percent of Georgia’s students taking the test.

The same story can be told with the ACT. This year’s ACT results revealed Georgia’s average composite score of 21.4 was higher, for the second consecutive year and the second time in history, than the national average of 21.

In fact, over the past decade, educational outcomes have been steadily improving as Georgia has raised expectations around standards and instructional systems to ensure that students are college- and career-ready when they graduate high school. Georgia has implemented some of the highest graduation requirements in the country, including four credits of both science and math.

Georgia is seeing the results of these changes.

Despite these gains and achievements, considerable public discourse involving the K-12 public schools is around how they are “failing.” While much of this narrative began under the era of No Child Left Behind, it has most recently been fueled by debate over the Opportunity School District (OSD) and Chief Turnaround Officer legislation. The public attention has primarily been focused around schools on “the list,’ which schools received an “F,” and how long have they been “failing.” 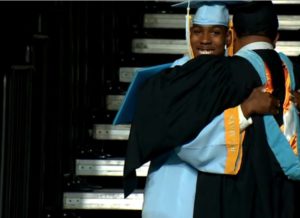 Joshua Hammond was graduated from Benjamin E. Mays High School in Atlanta in 2017 and was among the rising proportion of Georgia students who earn their high school diploma. Credit: atlantapublicschools.us

That narrative needs to change.

This is not to suggest that addressing the needs of schools, especially schools that are chronically underperforming expectations, is not a real and pressing issue. There are in fact students who attend schools for their entire academic career that are unable to provide the teaching and resources needed for students to be successful. This is not acceptable. However, labeling these schools – and by extension the students, educators, families and communities that comprise the schools – as failures inaccurately identifies the problem and hinders the ability to find a solution.

Much of the root problems around chronically low-performing schools can be found in the impacts of poverty and a history of disinvestment in local communities. In an excellent article examining the costs of educating low-income students, a metro Atlanta elementary school was highlighted as having more than 50 students living in an abandoned apartment building with no electricity or water. When the building was demolished, educators struggled to help their suddenly homeless students and their families find new housing and MARTA passes. They provided luggage and clean clothes, and other needs of homeless children. Knowing this, I ask: Is this a school that is failing its students?

The existence of chronically struggling schools is but a symptom of a larger problem. The problem is that many schools are being overwhelmed by issues of poverty and community disinvestment at a time when expectations around student achievement are being raised exponentially. Yet still, on average, student achievement is rising. It’s not where we ultimately want it, but educators are getting impressive results under difficult circumstances. 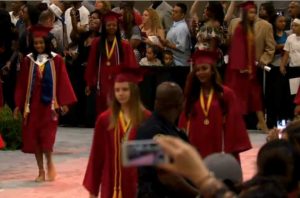 The Class of 2017 that was graduated from Atlanta’s Henry W. Grady High School is part of the 10 percent increase in Georgia’s high school graduation rate since 2012. Credit: atlantapublicschools.us
10 percentage points since 2012

As I ponder Georgia’s public education system, I think about all the students and the educators who serve them. Educators, particularly those who work in impoverished communities, need support and encouragement. They need resources and training to serve all the growing needs of their students. These needs include the gaining of knowledge, to be sure. But their needs also run the gambit of social, emotional, and physical health supports. Sometimes that need is as basic as a winter coat and breakfast.

There is much to celebrate in Georgia’s schools. Georgia is no longer ranked in the cellar but has moved up to the middle of the pack. We need to be talking about our successes and how we can get better, rather than past failures. We need to identify problems, lift up solutions, and provide supports to help communities improve their schools. These are things we can do to build a stronger Georgia and keep it the number one state in which to do business.

The next time you hear someone say Georgia is last in education, let them know they are living in the past and that our schools and students are having successes that are going to keep Georgia’s future bright.

Note to readers: Matt Cardoza has 18 years experience as a communications professional in education, with Rockdale County schools, Georgia Department of Education and now with the Georgia Partnership for Excellence in Education.