Georgia has some catching up to do to re-energize its economy.

Several efforts have been underway to do just that — such as Gov. Nathan Deal’s Competitiveness Initiative and the Metro Atlanta Chamber’s New Economy efforts.

Georgia Forward, a coalition of business, civic and government leaders, also has been shining the spotlight on what the state needs to do to adapt to tomorrow’s economy.

Marek Gootman, director of strategic partnerships for the Brookings Institution’s Metropolitan Policy programs, recently spoke at a Georgia Forward event, where he shared his assessment of the state’s economy.

For starters, Gootman said one must view the economy by metro regions rather than by states or the nation as a whole. The 100 largest metro areas in the United States take up 12 percent of the land, but they represent 66 percent of the population.

That’s dichotomy is even more pronounced in Georgia.

Brookings has said that the economic downturn during the past several years has not been a cyclical but a structural recession. 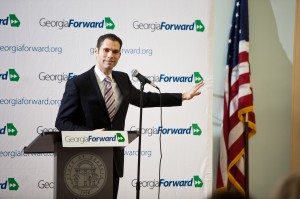 Brookings Institution's Marek Gootman shares his views of the Georgia economy before a gathering of Georgia Forward (Photo by: Anne Almasy)

“We need new growth strategies beyond the traditional approaches to economic development,” said Gootman, who described those as Starbucks, stadiums and stealing business from other places.

The magic recipe for a new economy should include exports, clean energy and clean jobs as well as innovation. It would be smart for Georgia companies to explore opportunities in developing markets around the world.

“The growth map has shifted away from the United States and Europe,” Gootman said. “Growth is occurring almost exclusively in the emerging markets. We need to refocus our economy.”

An area that Georgia can do well is with innovation. “There’s a very strong top tier research university sector in Georgia and strong technical colleges,” he said. But there also is a “job skills mismatch” with a significant gap on both the lower end and the higher end of filling people in positions.

The Brookings Institution ranked Atlanta 91st out of the top 100 metro areas in the United States for transit access. Only 38 percent metro Atlantans live near a transit stop and only 22 percent of the jobs are reachable by transit within 90 minutes.

Exploring the state’s economic potential and convening the various constituencies across the state are high on the list for Georgia Forward.

The organization will hold its third annual conference in Athens from Sept. 5 to Sept. 6.