Georgia’s kids are faring slightly better, according to KIDS COUNT

It may not seem like much, but Georgia advocates for children were celebrating the state moving up a notch in the 2014 KIDS COUNT Data Book, published by the Annie E. Casey Foundation.

In the 25th anniversary edition of KIDS COUNT, which was released today,  Georgia’s national rank went from 43rd in 2013 to 42nd in measuring the well-being of the state’s children.

Over the past 25 years, however, Georgia’s improvement is more noticable. The inaugural Data Book ranked Georgia at 48th.

According to the Georgia Family Connection Partnership, which released the results of the annual study in the state, the overall year-to-year improvement in Georgia has been modest, but the long-term trends tell a more compelling story. 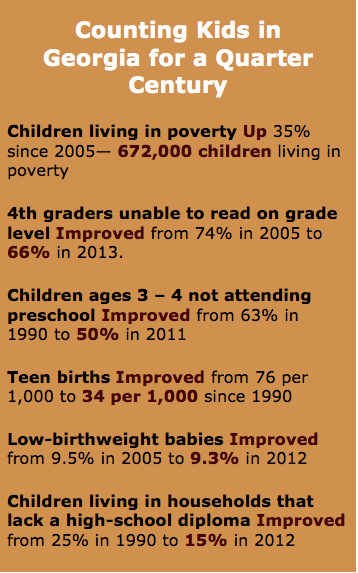 “You count what matters to you,” said Gaye Smith, executive director of the Georgia Family Connection Partnership. “Corporations have long known this and we—who care about the future of our state’s children—know it, too. With a quarter century of tracking measures, disseminating data, and watching trends, our experience informing local decision-making and seeking solutions through collaboration can now start to pay off — if we stay vigilant with our current vision, and strategic public and private investments.”

Back in 2005, 74 percent of fourth-graders in Georgia were unable to read on grade level. By 2013, that rate had improved to 66 percent. Eighth-grade math proficiency and high-school graduation rates also improved significantly over this time period. The rate of children not enrolled in preschool has remained at 52 percent since 2005.

“Georgia has a reputation for being a work friendly state, but we must ensure that we have a highly qualified workforce if we are to maintain that title,” said Dana Rickman, director of policy and research for the Georgia Partnership for Excellence in Education. “While Georgia has improved in key indicators, the data in the 2014 KIDS COUNT report tell us we must do better in key areas such as high-school graduation and post-secondary attendance and completion.”

In addition to gaining ground in education indicators, Georgia also improved in all four of KIDS COUNT’s health indicators. In the latest Data Book, low-birthweight babies (9.3 percent), children without health insurance (9 percent), child and teen deaths (30 deaths per 100,000), and teens who abuse drugs or alcohol (6 percent) rates have all improved over the past decade.

In the family and community well-being domain, Georgia saw a dramatic decline in teen birth rates (from 53 births per 100,000 to 34 per 100,000), as well as a decrease in children living in households that lack a high-school diploma.

Looking at trends since the Casey Foundation released its first Data Book reveals more dramatic results in some areas. In 1990, for example, 63 percent of children in Georgia ages 3 – 4 were not attending preschool. By 2011, that number had fallen to 50 percent, bringing Georgia up to 24th in the nation for that indicator. More than a quarter of Georgia’s children lived in households that lacked a high school diploma 25 years ago. By 2012, that indicator had improved by 44 percent to only 15 percent of households.

The story of economic security in Georgia, however, is not a bright one. More children are living in single-parent families and in high-poverty areas since 2005 and 2000, respectively. The rate of children living in poverty has surged to 27 percent—672,000 children—a 35-percent increase since 2005. The number of homes where parents lack secure employment increased as well, as did the number of children living in households with a high housing cost burden.

The 25-year data also show persistent struggles in Georgia. The percentage of high schoolers not graduating on time was the same in 1990 as it was in 2012. The number of children living in households without full-time, year-round employment, and the number of teens not in school and not working both have increased by three 3 percent since 1990.

“Education is what will drive us toward economic security—and reading proficiently by third grade is the gateway to education success,” said Arianne Weldon, director of Get Georgia Reading—Campaign for Grade-Level Reading. “Georgia is at the forefront of closing the 30 million word gap that separates low-income children from their more affluent peers. Access to language nutrition spans education, health, and our economy. That’s why an unprecedented broad-based coalition of hundreds of public and private partners has come together for this Campaign—which launches Aug. 6—under a shared expectation that all Georgia’s children will be proficient readers by the end of third grade.”

According to Rickman, Georgia is predicted to add 1.5 million new jobs by 2020. Nearly 60 percent of those new jobs will require a post-secondary education, yet only 42 percent of Georgia’s current adult population has education beyond the high-school level.

“Georgia is moving forward and has made many improvements over the past several years with several education reforms, but we can’t let that momentum slow,” she said. “When you look at numbers such as these, they tell you we have work to do throughout our education pipeline if we are to create and maintain economic prosperity for our citizens and state.”