Getting to know Ted Turner — a multi-sided ‘eco-capitalist-humanitarian’

By Guest Columnist TODD WILKINSON, author of the new book: “Last Stand: Ted Turner’s Quest to Save a Troubled Planet”

Ted Turner: Liberal or Conservative? Think hard before you reply.

Did you know that back in the late 1980s, Turner began spending summers away from Atlanta, retreating to the hinters of the wild American West, because it enabled him to live closer to the land and escape the annoying moniker “Mouth of the South”?

Or that contrary to popular opinion, Turner’s connection to Jane Fonda wasn’t centered around money, fame and power? In fact, they bonded over a mutual love of nature. Turner the sportsman taught Fonda how to hunt, fish and respect the Second Amendment. Fonda made Turner more aware that half of humanity—that’s most of the women in the world, guys—suffers from gross inequality compared to we men. 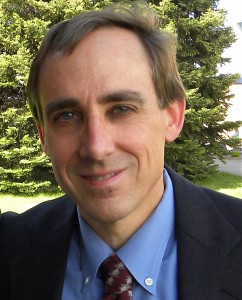 Todd Wilkinson, author of the “Last Stand: Ted Turner’s Quest to Save a Troubled Planet”

Did you know that Turner is now the second largest private landowner in America and a model for conservation?  His herd of 55,000 bison, which began modestly with just three buffalo at his plantation in South Carolina, is the largest in the world?

Did you know that one of Turner’s favorite activities is joining world leaders in howling to his wild resident wolf pack in Montana?

Or that Turner’s record-setting $1 billion gift in support of the United Nations, and his decision, along with former U.S. Sen Sam Nunn of Georgia, to confront the looming nuclear danger in an age of terrorism, has helped change the way wealthy Americans think about philanthropy.

There, now that I have your attention, consider this question: Who is the real Ted apart from the superficial media stereotype?  Later this autumn, the man who will go down in history as one of Atlanta’s best-known global citizens turns three quarters of a century old.

What I discovered over the last eight years while writing my new book about Turner—and gaining unprecedented, unlimited access to the man— is how little Georgians, fellow Southerners and Americans in general actually know about him; in particular, they know almost nothing about Turner’s evolution as a groundbreaking “eco-capitalist-humanitarian” whose impact exceeds anything he achieved as a media mogul. 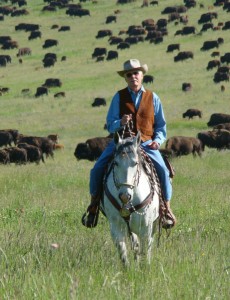 Ted Turner on horseback, riding through a bison herd in Montana (Photo by Elena Cizmaric)

Tom Brokaw, the NBC newsman lauded for celebrating “the Greatest Generation”, calls Turner one of the truly epic characters in American history. And yet Turner remains to most people, even in the Big Peach, something of an enigma, an outspoken caricature prone to, on occasion, making outlandish, politically-incorrect statements.

So ask yourself: Is Turner a Liberal or Conservative? The truth is that Turner represents, like most people, a blending of both.  And it is in this middle ground where America’s only hope may lie for getting the country out of the current dysfunctional partisan mess.

“You don’t need to have a lot of money to change the world,” Turner says. “All you really need are courage and heart.” 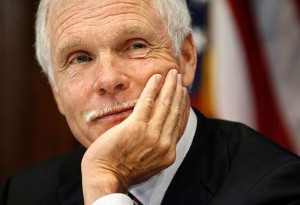 Besides serving as a call for citizens to step forward and make a positive difference, Last Stand has been described by some as a tool for conscientious business and community leaders to think about how they can harness capitalism as a force for societal good, not destruction.

For sure, what has defined Turner, the fiscally-conservative businessman, is his uncanny ability to shrewdly look around corners, peering into the future, anticipating opportunities—and challenges—before they actually happen. 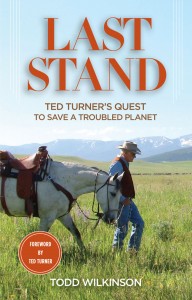 Book cover of “Last Stand: Ted Turner’s Quest to Save a Troubled Planet”

It’s what made him a billionaire, helped him proudly put Atlanta on the map as a respected international city, and today, in these gridlocked times in Washington, DC, serves as a real alternative to the status quo.

Turner believes that we Americans need to get together and rally, just like fans of the Braves have done so often over the years when the home team is down a couple of runs and coming to bat in the bottom of the seventh inning.

Whether it’s helping to ignite a renaissance for buffalo in the West, restoring grizzly bears, wolves and sea turtles, eradicating polio with the help of Rotary International, preventing terrorists from building and detonating a dirty nuclear bomb on U.S. soil, or approaching the elimination of poverty, hunger and illiteracy as fundamental human rights issues, this side of Turner seldom makes headlines.

Former Soviet President Mikhail Gorbachev, who won a Nobel Peace Prize for working with Ronald Reagan to end the Cold War, believes that Turner represents the prototype for a new category of 21st century thinker:  Yes, it’s the “eco-capitalist-humanitarian.”

As Turner himself says, the problem isn’t “capitalism” nor is it with “democracy.” Instead, it’s the way that both are being misused and corrupted as weapons to destroy society rather than making things better for all citizens.

If that isn’t a rallying cry, then what is?

Note to Readers: Todd Wilkinson has been a national journalist for the last 25 years. “Last Stand: Ted Turner’s Quest to Save a Troubled Planet” is available from local booksellers and online in e-edition.  371 pages, Lyons Press.