"Pinwheel Wildflowers" is one of the four kinetic pieces in the show. (Photo courtesy of the Atlanta Botanical Garden.)

From now until October 16, Midtown’s Atlanta Botanical Garden will be the home not only to a sea of blooming and thriving flora, but also a new outdoor art exhibit featuring large, metal origami-inspired sculptures.

“Origami in the Garden” is an all-new art exhibition including 18 installations with over 70 sculptures inspired by origami, the centuries-old art of intricately folded paper.

The exhibit — which is so large that it took six tractor trailers to transport the artwork — was created by Santa Fe artists Kevin and Jennifer Box in collaboration with acclaimed origami artists Robert Lang, Michael LaFosse, Beth Johnson and Te Jui Fu.

The larger-than-life sculptures begin as a single sheet of paper, which is folded into the desired shape. From there, the origami is translated into a metal sculpture through a 35-step, 12-week process that took nine years for the Box duo to perfect.

“Origami in the Garden” reflects universal truths of humanity, like the desire for love and peace, while using nature as a backdrop to reflect patterns of life. 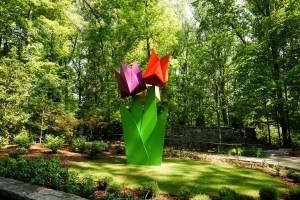 This idea is reflected in “Perennial Peace, Tulips for Betty,” a sculpture of three colorful tulips so large that they appear to touch the sky. In an accompanying audio tour narrated by Kevin Box, he explained that the sculpture represents the natural ebb and flow of life.

Much like blooms going dormant in the winter, another truth of life is that nature has a series of interconnected pieces, each playing their part to create something larger. 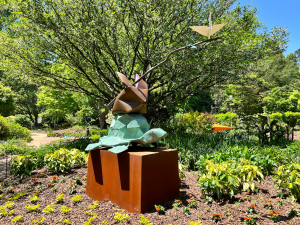 In “Caravan” — a sculpture depicting a rabbit hitching a ride on the back of a tortoise as they pursue a carrot — Box expressed the importance of humans working together to create a symbiotic relationship, much like the natural world.

“I wanted to tell this story about collaboration and how we get from A to B better if we work together as a team,” Box said. “Nature shows us that in many different ways.”

He continued: “Caravans are a very traditional model of transportation and collaboration that humanity has been practicing for thousands of years [with] different people bringing their talents and their resources to succeed together.” 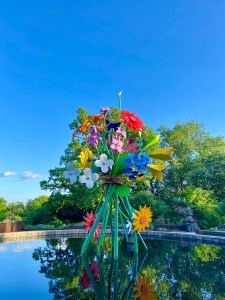 “Scents of Gratitude,” sitting over the pond near the outdoor desert section, is a breathtakingly intricate and vibrant bouquet with 77 flower components and kinetic pieces.

The sculpture is the tallest display at the Garden — coming in at 31 feet and weighing 5,300 pounds. Box described the piece as “the largest and most ambitious sculpture of my career,” taking several years to plan and a full year to assemble.

As the name suggests, this sculpture is an ode to the good things in life — the people or experiences that bring a flush of gratitude. And in many cultures, flowers are a way of saying thanks, symbolizing those feelings of warmth and contentment.

Here, Box is giving a metaphorical flower to everyone who has supported his career as an artist.

“It’s an expression of my heartfelt gratitude for my life, my work and the fact that I get to be an artist and build things like this,” he said. “It’s a tremendous privilege in my life that is not lost on me. I think that [feeling] is conveyed in this giant expression, an explosion of colors and joy and movement.”

In a way, this piece can be seen as a thank-you to Atlanta’s Botanical Garden, where Box has long hoped to display his work.

Box first pitched an origami exhibit about 10 years ago, according to ​​Exhibits Project Manager Emily Saccenti, but his work wasn’t large enough for the Atlanta site.

“While he was here for the installation, he let me know that it was [the Atlanta Botanical Garden] that helped him come up with his whole concept of ‘Origami in the Garden.’ He knew from visiting here as a kid that he wanted to create sculptures to be installed in a botanical garden setting,” Saccenti said. “You could tell the whole time he was here, he was sort of like a kid in a candy store, like this was his dream coming true.”

The team was drawn to Box’s work because of his unique approach to origami and the exhibition’s connection to the natural world. Saccenti refers to the union between art and nature as “stealth education.”

Between the real blooming flowers and the larger-than-life metal ones, it feels like summertime has made its way to the Garden. Click here to learn more about how to check out “Origami in the Garden.”