Godfrey Barnsley’s dream: A southern Eden in the wilderness, its collapse, and a modern-day rebirth (Part 3) 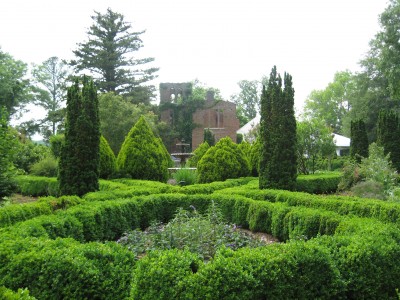 Earlier I wrote about the migration of Godfrey and Julia Barnsley from Savannah to the mountains, where Godfrey Barnsley built their dream estate, “the Woodlands” — not as a plantation, but in the style of an Italianate manor sustained by the countryside. Yet the existence of Barnsley’s dream house was dependent on his work as an international cotton agent that tied his fate and that of his family to the cotton industry. 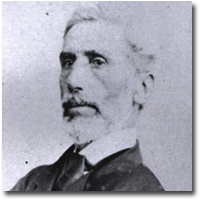 Thus, the war of secession that engulfed Georgia came in time to the Woodlands. In May 1864 Union and Confederate troops skirmished on the grounds of the Barnsley estate as General James B. McPherson passed through Woodlands on his way to Atlanta (where he would die two months later). Seeing the manor, its gardens, fields, and vineyards, he was overwhelmed: “This is a little piece of heaven itself.” While the villa survived the war, due largely to the fact that McPherson himself guaranteed its protection, Barnsley’s business did not.

After the war his two surviving sons, both of whom had served in the Confederacy, exiled themselves to Brazil. With the international cotton trade in flux, Barnsley lost his business and died in 1873 with almost no resources, save his estate. (He even directed that no gravestone be erected, to save money and energy for other needs.) His daughter Julia, and after her, his grandchild Addie, both tenacious and proud southern women, would successively run the estate. It was around the time of Addie’s caretaking that it assumed the name “Barnsley Gardens.” 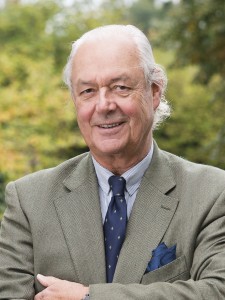 Prince Hubertus Fugger purchased the Barnsley estate and turned it into the world-class resort it is today. Credit: www.fugger.de

In 1906 a tornado ripped through the Barnsley estate, seriously damaging the mansion’s roof. Still a very difficult time in the rural lower South — it would nearly forty more years before Georgia fully recovered from the Civil War’s devastation — the family lacked the funds to make repairs. They abandoned the house and moved with their possessions and furnishings into the adjacent kitchen wing with its brandy cellar. Never again would the manor be inhabited.

The final blow came on June 7, 1942, when Addie died. She was the last of the Barnsley owners. Visited by personal family tragedies and under the strain of debt, the Barnsley estate was foreclosed on. The land was sold and all the family’s furnishings and memorabilia liquidated at public auction. Like so many Old South dreams, this one too had faded away, picked over by souvenir hunters and scavengers and falling back into a green rolling countryside more reminiscent of the Cherokee of old than any advancing civilization.

In 1988 a respected and titled German businessman, Prince Hubertus Fugger of Augsburg, the descendent of a distinguished Bavarian family long noted for its banking and philanthropy interests, purchased the old Barnsley estate as a property investment. Under the influence of Clent Coker, a very persistent and convincing neighbor who had grown up in the environs of Barnsley Gardens and devoted a good part of his life to collecting artifacts and documenting the full Barnsley story (told in his book, Barnsley Gardens at Woodlands), the Fuggers were inspired to take a closer look at their “investment.” 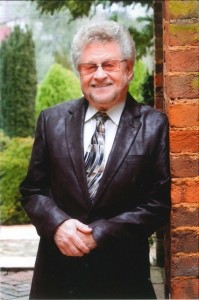 Understanding something of heritage, art, and horticulture, the more they learned of the estate’s history, the more they saw in it another kind of opportunity. For here was an authentic human story with roots deep in antebellum America — and one on the precipice of vanishing entirely. They soon came to appreciate that, as important as the timber and the acreage of their property, were the artifacts and the stories of this once flourishing family and their beloved home.

With a newfound excitement and commitment to the project, the Fugger family underwrote the restoration of the gardens, numerous buildings, bogs, and a museum, along with (remarkably) the construction of a village of cottages that perfectly complement Barnsley’s 19th-century Italianate manor, designed in the style of architect A. J. Downing (they were built, in fact, from a common set of architectural plans). Today, this world-class resort is owned by Julian Saul, a former president of Shaw Industries who, according to Clent Coker, continues to make improvements.

The Barnsleys’ story is a gripping tale of dreams, tragedy, and triumph, all played out in and inseparable from Georgia’s history. I have touched on some of the family’s history, but there is much more to be discovered in Coker’s account. The fact that we can travel back in time with the Barnsleys is due to the stories and artifacts he has painstakingly collected and would not let die. Like all good biography, his history of three generations invites us to reflect on the ups and downs of our own lives, and to contemplate the impact that the sweeping tides of national history have upon our personal fortunes and choices.

In the end, what we make of this recovered dream in the mountains throws light on our own pursuits and sacrifices. Thanks to so many committed people, an important piece of Georgia history is present for us to reengage and integrate into the ongoing flow of our own lives. The existence of Barnsley Gardens is a testament to the power of the storyteller who, through the ages, preserves for us where we came from and invites us to reflect on where we are headed.

Previous Article
At 78, my healthy mom’s guide to dying well
Next Article
Two twists in the struggle over energy production