At Wednesday’s Eggs & Issues breakfast, hosted by the Georgia Chamber of Commerce, newly reelected Gov. Brian Kemp opened the door for the state to start tackling the issue of housing affordability as an economic development issue.

But housing supply is not keeping up with Georgia’s growth in jobs and population, according to the Georgia House of Representatives Study Committee on Regulation, Affordability, and Access to Housing chaired by Rep. Dale Washburn (R-Macon) that was released in November.

Clearly, the governor had read the report.

In a conversation with Chris Clark, Georgia Chamber’s president and CEO, Kemp described himself as a “local control governor.” He went on to say that Georgia’s economic development potential was being constrained by a lack of affordable housing. Restrictive housing legislation was working against the state’s ability to expand and create jobs.

“We want people to live in communities where they work,” Kemp said. “I’m not saying we have all the answers. I want to work with you on how we tackle this issue.”

The Georgia House Study Committee report, prepared by the House Budget and Research Office, laid out the issues. 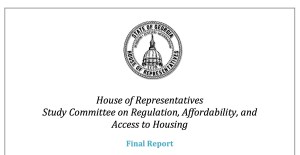 The United States has a housing shortage of between four to six million units, and Georgia is experiencing a similar shortage. The report stated the current inventory in major Georgia cities was 40 percent to 57 percent below the 2019 supply.

“Atlanta currently has a 1.9-month supply and would need to develop 72,400 new homes over the next 12 months to address the deficit; however, only 13,000 homes are expected to be built in that timeframe,” the report stated.

“The underdevelopment of homes is a major contributor to the lack of affordable homes,” the report continued.

The problem is only expected to get worse, not better. The number of new residential building permits issued decreased by 52 percent in the decade between 2010 and 2019 compared to the decade of 2000 and 2009, despite an additional one million residents in the state. An additional 1.2 million new residents are expected by 2032, showing the need to greatly increase the supply of housing.

As of Oct. 28, 2022, the median price or a new home in the state was $323,991. Habitat for Humanity Georgia estimates that one in seven Georgians spends more than 50 percent of their income on housing and that 20 percent of the population lives below the federal poverty level. 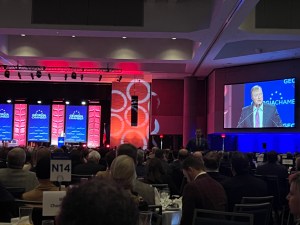 About 1.4 million Georgia households can’t afford to buy a home in today’s market because monthly mortgage rates are 43 percent higher than they were last year.

The report zeroed in on the impact of local restrictions that have prevented the building of new housing units – be it for purchase or lease.

The greatest need is around the concept of the “missing middle” – housing that includes duplexes, triplexes, fourplexes, townhomes, bungalow courts, and mansion apartments.

“Missing middle housing meets the needs of those who desire smaller, more affordable homes and creates more walkable neighborhoods, especially when placed near transportation hubs,” the report stated. “Many cities across the state are increasing permitting for these types of housing, with Atlanta leading the way,” but there is a need to support more multifamily housing.

It has now become an economic development issue with business executives asking about the availability of affordable housing before moving operations to an area.

“For Georgia to continue to grow and to be an excellent state in which to do business and raise a family, a good supply of housing is an absolute necessity,” the report concluded. “Georgians should have the right to choose whether housing will be purchased or leased. In either situation, the cost of housing must be reasonable so as not to exceed an acceptable amount of the incomes of Georgia residents. “ 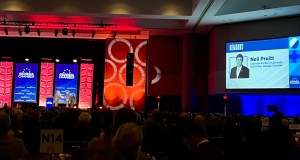 The Eggs & Issues breakfast, held at the Georgia World Congress Center’s Thomas Murphy Ballroom, is an opportunity for the state’s top elected officials to talk to the business community about their goals during the coming year.

It was the first time Lt. Gov. Burt Jones and House Speaker Jon Burns were addressing the gathering of more than 2,600 business, government and civic leaders.

Almost everyone who spoke at the breakfast remembered the late House Speaker David Ralston, who died in November after being elected speaker in 2010. A special video tribute was applauded with a standing ovation.

The meeting also marked the passing of the gavel from 2022 Georgia Chamber Chair Ben Tarbutton III, president of the Sandersville Railroad Co., to 2023 Chair Neil Pruitt, chairman and CEO of Pruitt Health.

Pedro Cherry, president and CEO of Atlanta Gas Light and Chattanooga Gas, also became the 2023 vice chair of the Georgia Chamber, which means he will chair the business organization in 2024.