Gov. Deal’s Competitiveness Initiative should build on past efforts; invite all metro players

Once again, the Atlanta region and the State of Georgia are seeking ways to improve the state’s competitive edge.

For more than a decade, economic development leaders have been trying to figure out what industries Georgia should target to strengthen the state’s economy.

The latest version of this endeavor is Gov. Nathan Deal’s Competitiveness Initiative — an effort that is being launched by Chris squared — Chris Clark, president of the Georgia Chamber of Commerce, and Chris Cummiskey, commissioner of the Georgia Department of Economic Development.

Deal’s initiative was launched in April, and it includes 23 business leaders from across the state all looking for stronger coordination and cooperation in regional and state-wide economic development efforts.

On Monday, July 18, Deal’s Georgia Competitiveness Initiative Summit was to focus on the metro Atlanta economy. In addition to Cummiskey and Clark, Tad Leithead, chairman of the Atlanta Regional Commission, was listed as “special guests.”

It is a laudable goal for Georgia leaders to examine ways to become more competitive — especially in this era of high unemployment and lower per capita income among the state’s workers. 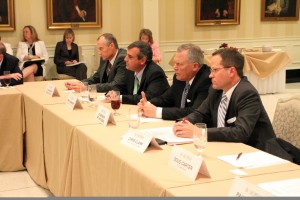 But it would a shame if Georgia leaders were to just repeat an exercise that’s been conducted at least three times in the past decade.

The first exercise was released by the Council on Competitiveness in 2001 when Harvard University economic professor Michael Porter studied five cities to see in which areas they could become clusters of innovation.

At the time, then Georgia Tech President Wayne Clough and BellSouth CEO Duane Ackerman had leadership positions with the national Council on Competitiveness.

But the region’s traffic and education problems threatened metro Atlanta’s economic prosperity. To become an economic center of the future, the study said the region needed to focus on its quality of life.

(Looking back a decade later, it is painfully obvious that those quality of life issues have yet to be addressed).

Where metro Atlanta scored particularly low was in the number of patents that had come out of the region, the lack of venture capital and lower rate of public offerings compared to other high-growth areas.

The next major effort occurred in 2005 when the Georgia Research Alliance conducted a research study looking for a “big bang” — technological fields where the state’s government, university and business leaders should invest their resources to catapult the region as an economic leader.

That study, led by then Southern Co. CEO David Ratcliffe, narrowed in on three promising fields in the bioscience area.

The first was “regenerative medicine,” which included tissue engineering and biological substitutes that can be used for transplants.

The second was “predictive medicine,” which focused on identifying people who were most susceptible to diseases based on DNA, and identifying customized treatments.

And the third area centered on “global health,” which included infectious diseases, such as AIDS. That area would build on the presence of several key Atlanta-based institutions involved in global health, including the Centers for Disease Control and Prevention, the Carter Center, CARE, the Task Force for Global Health and several of the state’s leading universities, such as Emory, Georgia Tech and the Morehouse School of Medicine.

The Georgia Research Alliance then recommended that the state focus its efforts in make the state a center for the development of vaccines. For one year, the State of Georgia did invest millions in its vaccine initiative, but that effort was not sustained.

The last major economic development study was done by the Metro Atlanta Chamber in 2009.

The New Economy Task Force, with the help of the Bain & Co. consulting firm, analyzed the region’s economy and discovered that its per capita income had decreased and its job growth had not kept up with its population growth.

That report recommended that metro Atlanta continue to target industries where it already has some competitive advantages — logistics and supply-chain businesses, technology, business services, and the health and bioscience sectors.

That report also said the region needed to continue its focus on quality-of-life issues, such as transportation, water and education.

Interestingly enough, Ratcliffe chaired the New Economy Task Force and determined that the Metro Atlanta Chamber needed to “recalibrate” and focus its efforts rather than cast as big a net.

Now Deal, Clark and Cummiskey are in the middle of the state’s latest competitiveness initiative — and they will be issuing the results of their study later in the fall.

But there are areas of concern. The Metro Atlanta Chamber (which has led the region’s economic development strategy) is not directly involved in this latest initiative. Instead, the governor is working with the Atlanta Regional Commission, the planning agency for metro Atlanta, which now is doing its own “Regional Economic Development Strategy.”

Atlanta Mayor Reed also has a key seat at this economic development table. Plus, the mayor has recently brought in Brian McGowan, who served in President Obama’s U.S. Department of Commerce, is the new president of the Atlanta Development Authority.

As someone who is looking at the region with fresh eyes, McGowan said: “It’s clear that the economy needs to be redirected” beyond the housing and construction industry.

Metro Atlanta’s future will be one that’s connected to the rest of the globe — through Hartsfield-Jackson International Airport, the Port of Savannah, its universities and their technology research on 21st Century industries, he added.

So as Gov. Deal’s Competitiveness Initiative progresses, it’s important that it builds upon the foundation that’s already been set.

The issues have remained amazingly constant. We must improve our quality of life. We must play to our natural strengths. And we must make sure that all our economic development entities are working in tandem rather than as independent or competing organizations.

Let’s just hope that 10 years from now, we won’t be asking the same questions and facing the same problems as we are today.