Spring cleaning is underway at Grant Park, the city’s oldest public greenspace, and the Grant Park Conservancy (GPC) team has plans to spruce up its northern entrance. 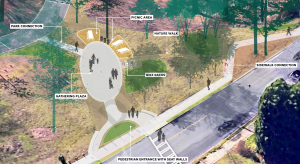 The drafted plans for Loomis Plaza. (Courtesy of the Grant Park Conservancy.)

The goal is to reinvigorate this section of the park, which GPC Executive Director Michelle Blackmon describes as a “key pedestrian artery.”

The GPC team started the planning process before the pandemic, drafting the plans with landscape architect Grace Dials and a steering committee of 12 Grant Park neighbors. Blackmon expects to finalize the plans within the next few months. 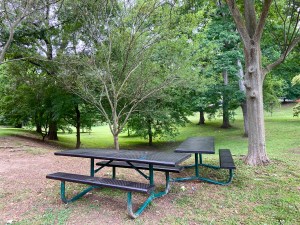 This area will be revamped with additional picnic spots. (Photo by Hannah E. Jones)

The space is relatively empty today, save for two picnic tables, although it was once home to a towering tree that defined the area.

“We lost a large tree in the area, which had been dead for a while, but it had a huge presence,” Blackmon said. “Once it was gone, it became even more apparent how unappealing that area of the park is.” 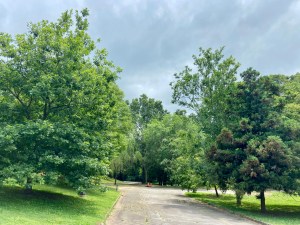 Blackmon points to two main infrastructure issues of the space — crumbling asphalt and flooding. Under the new plans, Loomis Plaza will have improved water drainage, more green space and a smooth walkway. Blackmon describes the latter as a critical component of making the park accessible for everyone.

“As we look at access for everybody, whether it be a mom coming in with a stroller or a senior citizen or folks in wheelchairs — [currently] the pavement, especially as you cross into the area, is really a mess,” Blackmon said. “Part of the plan is removing all of that crumbling pavement and creating a really nice space that anybody can navigate through or enjoy gathering in.” 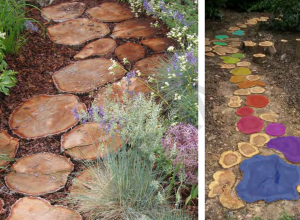 Examples of a nature walk. (Courtesy of the Grant Park Conservancy.)

The team also wanted to add a “touch of whimsy” to the plan, so they conceptualized a nature walk — connecting to the Sydney Street sidewalk — constructed from eco-materials.

Between community engagement efforts with the steering committee and an input session last weekend, Blackmon said the neighbors welcome the project. Residents’ main concerns are protecting the trees and improving the picnic space.

An arborist will conduct a survey to check for dead or dying trees, but Blackmon anticipates only cutting down two invasives. The team will also plant more native trees and pollinator-friendly plants throughout the area, forming a meadow.

The plans are projected to cost around $300,000, supported through grants and donations.

Once completed, Blackmon envisions the Loomis Plaza breathing new life into the northern entrance of Grant Park, inviting folks in. As Grant Park celebrates its 139th birthday this month, GPC strives to keep giving folks a reason to come back and uphold its historic place in Atlanta’s culture.

“[Grant Park] was very quickly nicknamed ‘the people’s playground’ because everybody liked to come and enjoy Grant Park. We’re trying to live up to what ‘the people’s playground’ means,” Blackmon said. “We aspire to deserve that nickname. So as we embark on projects and improvements in the park, equity, access and inclusion are all things that we are trying not to use as buzzwords, but really as part of the planning process.”

Click here for a closer look at the drafts for Loomis Plaza and email GPC to give your input.

Previous Article
Trump train sputters, but conservative wins continue among Georgia Republicans
Next Article
Guess who’s not the lead story of this primary?