By Maria Saporta
As published in the Atlanta Business Chronicle on February 19, 2016

High-profile Atlanta lawyer Ernest Greer is becoming co-president of Greenberg Traurig LLP, a move that will realign the leadership of the law firm’s Atlanta office.

Greer, who served as chairman of the Georgia Chamber of Commerce in 2014, will continue to be based in Atlanta although most of his duties will now focus on client development on a national and international scale.

Ted Blum, who has been co-managing the Atlanta office with Greer, now will be the top manager of the office. 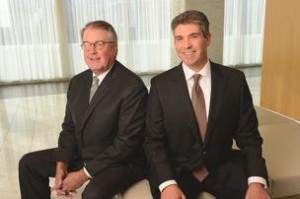 “For us to be able to have someone like Mark Grantham to lead our litigation office is another great win,” Greer said. “It helps to affirm what we have set out to create – a premier Atlanta office with an international role.”

Greer said Greenberg Traurig has its executive team in various offices around the country, so he does not have to move as he takes on an expanded national and international role with the firm.

“Atlanta is home. It’s where my children have been raised,” Greer said. “It has had a material impact on me. I will continue to play a key role in the Atlanta community, but so will Ted, and so will Mark.” Greer said he intends to continue serving on the boards of Achieve Atlanta, Children’s Healthcare and the Atlanta Police Foundation. He also is vice chairman of the Atlanta History Center.

Greenberg Traurig now has about 100 lawyers in Atlanta, an office that is becoming increasingly important for the firm.

“What we have done in Atlanta as Greenberg Traurig, we have tried to create an international platform that’s an integral part of Atlanta’s community and its future,” Blum said. “The office is doing extremely well. We recognized years ago how important Atlanta was to Greenberg Traurig. We have really put a stake in the ground. This office has become a shining star in the system.”

Blum also has become more involved in the community. He is chairman of the advisory board of the Chick-fil-A Foundation; he is a member of the Rotary Club of Atlanta; he serves on the board of Junior Achievement of Georgia; and he is general counsel of the Jewish Federation of Greater Atlanta.

Meanwhile, Grantham has been actively involved with the Atlanta International Arbitration Society (AtlAS), a nonprofit that is positioning Atlanta as a venue for the resolution of international commercial and investment disputes.

The firm also is trying to combine veteran lawyers with younger ones. For example, Grantham, 64, will co-chair the Atlanta business litigation practice with a younger partner — Richard Valladares, who has been listed in trade publications as a rising star.

Both Greer and Blum credit internationally renowned entertainment attorney Joel Katz for the success of the Atlanta office.

Katz opened the Greenberg Traurig Atlanta office in 1998 when he sold his practice to what was then a Miami-based law firm. Since then, Greenberg Traurig has become a firm with multiple bases of operation. The executive chairman lives in New York and the CEO lives in Denver. Its executive officers are based in multiple cities.

“Joel to me represents everything that we’ve been trying to build as a law firm. He is best in class,” Blum said. “He’s an icon in the entertainment world, and he’s an icon in the business world. Joel’s contribution makes this office as strong as it is today. Joel is more active than he ever was. He is a critical advisor, a critical player, and he will continue to be so. He was Greenberg Traurig in Atlanta. We have brought in lots of others, but that’s never diminished the role or face of Joel Katz.”

As Greer said: “It was Joel who said we need younger guys.”

The firm has been strategically trying to build a full-service firm in Atlanta. Last July, it expanded its government law and policy practice with the addition of Chuck McMullen, Tharon Johnson and Blake Ashbee, who had been with Dentons/McKenna Long Aldridge.

Blum explained that the firm had a strong government and public policy practice in other markets, but not in Atlanta.

The latest coup is Grantham. Over the years, Greer, Blum and Grantham have tried to recruit each other.

“From the outside, I’ve watched what Ted and Ernest have done here with the Greenberg firm — building a full service practice,” Grantham said. “It’s a great formula for success. Atlanta is the hub of business in the Southeast.”