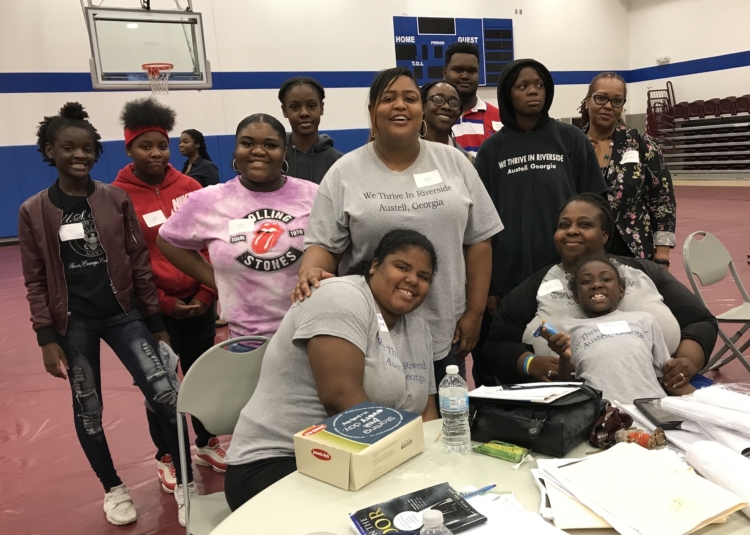 Community advocate Monica DeLancy (front with child in lap) led a group of adults and teenagers to a seminar where they learned to build partnerships across generations in order to promote civic improvements. Credit: David Pendered

Jackie Ampofa is a teenager who represents the next generation of community leaders. She’s working to improve a blighted area near Six Flags Over Georgia and her mentor – whose work contributed to a new statewide law protecting tenants – brought her to an event that teaches folks from less-advantaged backgrounds how to build partnerships across generations. 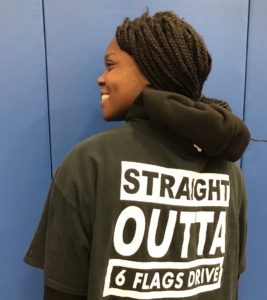 Borrowing from the movie, ‘Straight Outta Compton,’ the message on Jackie Ampofa’s T-shirt reminds of the crime-ridden Six Flags Over Georgia area where she lives. The community traded the name for a new one that inspired the message on the front of the shirt: ‘We thrive in Riverside.’ Credit: David Pendered

“The main thing is to get the youth involved,” said Monica DeLancy, who mentors Jackie and other youths in Cobb County’s Riverside Parkway neighborhood, rebranded to that name in 2014 in part to distance it from a reputation for crime around the Six Flags tourist attraction.

DeLancy, some other moms and 10 youngsters attended a June 8 leadership training program. They were among a crowd of about 115 who attended the half-day seminar hosted by Atlanta Neighborhood Partnership, Inc., in conjunction with NeighborWorks America and Georgia State University, at GSU’s Decatur campus. Most who came to Neighbors Together: Young Adults and Resident Leaders Building Stronger Communities reside south of the I-20 corridor.

The adults came to attend programs such as, Developing Your Inner Leader and Building Strong Communities of All Ages. Jackie and other younger folks listened in at Principles of Financial Well-Being and How to Prepare for Today’s Job Market.

Mary Norwood, who chairs the Buckhead Council of Neighborhoods, said the seminar comports with Atlanta’s long tradition of civic involvement by everyday residents. Norwood, who made her start in the public arena as a neighborhood advocate, observed that former Atlanta Mayor Maynard Jackson cultivated grassroots civic leaders into a formal structure that still exists as Neighborhood Planning Units and the Atlanta Planning Advisory Board.

DeLancy has been organizing for years in the area near Six Flags Over Georgia. A road of the same name was changed, to Riverside Parkway, and adults have created an array of local programs for youths including Jackie. The programs’ shared goal is to provide youngsters with a path toward a healthy and fruitful future. 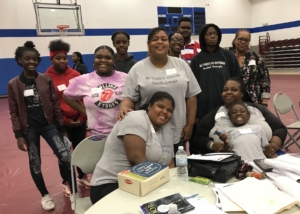 Community advocate Monica DeLancy (front right, with child in lap) led a group of adults and teenagers to a seminar where they learned to build partnerships across generations in order to promote civic improvements. Credit: David Pendered

At age 18, Jackie’s a lifelong resident of rental homes and is a rising senior at Pebblebrook High School. She’s active in her church, in Youth Leadership Riverside, and in STING, Inc. – a non-profit that provides programs for teens.

To explain the depth of Jackie’s commitment to improving her neighborhood, DeLancy said Monday in a text:

DeLancy is a rock star in the world of community organizers.

DeLancy’s work to protect renters contributed to a bill the Legislature passed this year following its introduction by state Rep. Sharon Cooper (R-Marietta). Gov. Brian Kemp signed House Bill 346 and it took effect July 1, protecting tenants who report unsafe conditions or code violations from eviction and other retaliation by landlords.

DeLancy has run for public office, in a 2014 bid for state House. She said Saturday she’s considering a run for Cobb County’s Board of Commissioners. The seat representing south Cobb will be open in the 2020 campaign, as incumbent Commissioner Lisa Cupid has announced her bid for county chair.

DeLancy observed at the event that young people have long been at the center of social movements that lead to change. Today’s generation needs to be reminded of the legacy of their mantle as change agents.

“Young people need to see themselves as being part of the solution,” DeLancy said.

Note to readers: David Pendered serves on an ANDP advisory board. 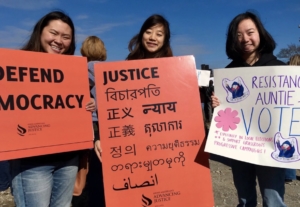 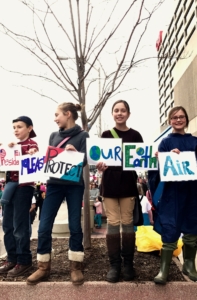 Previous Article
The S.A.F.E. Center helps students inside and outside the classroom
Next Article
Atlanta shouldn’t settle for mediocre ‘More MARTA’ plan