Georgia State University’s (GSU) Rialto Center for the Arts is a cultural staple in downtown Atlanta, sitting at the corner of Forsyth and Luckie Streets for over a century. Each year, the arts center releases a theme for its upcoming season, and the team recently announced its newest concept — Season of Power & Spirit. 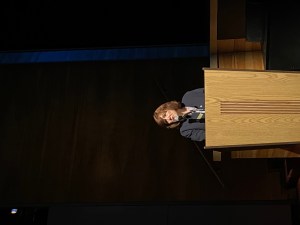 On June 22, Executive Director Lee Foster took the stage to introduce the importance of the new theme and give a teaser for this year’s upcoming shows.

“What is power and spirit? Power is energy. Power changes minds, power changes spirit, power changes hearts,” Foster said. “Power must be directed through spirit. Spirit is that higher nature that teaches ultimate truth and promotes healing and unity.”

She continued: “The artists this season are both global and local representations of artistic excellence that move human emotion toward unity, inspiration and change.”

The season will kick off on Sept. 15 and run until April 21, featuring 14 groups who will take the stage at downtown Atlanta’s historic art center. The performances will run the whole gamut of artistry — jazz, a capella, dance, opera and more.

A sneak peek at “Traces.” (Photo courtesy of Rialto Center for the Arts.)

The Season of Power & Spirit will begin with a one-man performance with Étienne Minoungou called “Traces: A Speech to African Nations,” which tells the story of one man’s return to Africa. The performance is in French, with English subtitles.

An all-female a capella group from Zimbabwe, called Nobuntu, will also make their way to Atlanta this fall to showcase their original performances with traditional music and instruments, paired with minimalistic percussion and dance.

“Nobuntu is an African concept that values humbleness, love, purpose, unity and family from a woman’s perspective,” Foster said. “The ensemble [believes] that music is the most important and original wheel of change. It’s the way of expression for a new generation of young woman singers to transcend racial, tribal, religious, gender and economic boundaries.”

To round out 2022, the Rialto will continue its 25-year-old tradition — the annual Holiday Concert — bringing together over 200 student and faculty performers from the GSU School of Music. 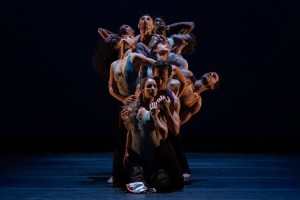 The Martha Graham Dance Company, the oldest dance company in the U.S., will visit the Rialto on Feb. 5. (Photo courtesy of Rialto Center for the Arts.)

The new year will kick off with power couple Marilyn McCoo and Billy Davis Jr., a seven-time Grammy Award-winning couple and former members of The 5th Dimension. The duo are experts in their craft, performing together for over 50 years.

Folks can also look forward to performances by:

The 2022-23 season will wrap up on April 21 with acclaimed drummer Jeff “Tain” Watts and the GSU Jazz Band. For one week prior to the concert, Watts will work with the university’s jazz band to craft an unforgettable show.

If you’re looking for some artistic enrichment before this fall, check out Rialto’s virtual and free performing arts series, “Feed Your Senses.” Every third Wednesday at noon, folks can tune in for a behind-the-scenes look at the creative process from art experts.

Tickets to the 2022-23 season will go on sale in-person and online on Aug. 24. Click here for more on the Rialto’s upcoming Season of Power & Spirit.