A beaming John Portman greeted his friends and admirers Wednesday evening at a VIP reception that included a private preview of the exhibit of his art and architecture that will open Saturday at the High Museum of Art.

Portman is Atlanta’s own architect, developer, painter, scupltor, designer of furniture and lighting fixtures who sprinkles his philosophy in all his work.

While most of the people at the reception were familiar with parts of his work, few really knew the breadth of his many creative outlets.

So the exhibit presents an opportunity for Atlanta to get to know the multi-dimensions of John Portman, and it also provides tangible evidence that Atlanta appreciates one of its very own.

None of that was lost on Portman. When I asked him how he felt the exhibit had turned out, Portman was clearly pleased (even though he admitted to feeling a bit exposed).

For those attending Wednesday night’s event, conversations had a dominant theme — how wonderful it is for the High to highlight the work of John Portman while he, his family and associates can bask in its glory.

The exhibit takes up the entire Anne Cox Chambers wing of the expanded High Museum. It includes a myriad of his paintings and sculptures as well as dramatic architectural models, renderings and photos of his projects around the world (including some that were never built).

One of the most dramatic models is of the Songdo Landmark City Master Plan with the Incheon 151 Tower that’s being built in South Korea. The tower is supposed to be completed in 2014. 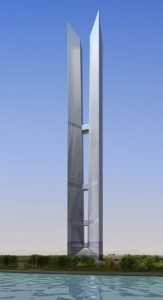 But Mickey Steinberg, a longtime Portman associate, said could be 15 years before the entire master is built out. While we were standing by the tower, Steinberg looked across the room to a couple of Korean gentleman, and said that one of them was developing that project, which will include the second tallest building in the world.

High Museum director, Michael Shapiro, said doing the Portman show has “been a wonderful journey for us.” The more he was able to explore all of Portman’s creations, Shapiro said that they display “a single voice that has many different aspects. It is one man and one vision.”

Portman did say that he probably drove the staff at the High a bit crazy by “tweaking” the exhibit as it was being put together.

A.J. Robinson, president of Central Atlanta Progress who worked for Portman for more than 20 years, said that one of Portman would often repeat a quote from Gertrude Stein: “There is just no there, there.” Portman would say those words when reviewing various projects.

Robinson then ended his comments by saying: “This exhibition definitely has a lot of there, there.”