A rendering of how the new SIgnia by Hilton hotel will look with Atlanta's skyline (Special: GWCCA)

The sun broke through the clouds Tuesday afternoon when the Georgia World Congress Center Authority held an official ground-breaking ceremony for 975-room hotel that is being developed on the convention’s property next to the Mercedez-Benz Stadium along Northside Drive.

The ceremonial event crystalized the sentiment among the attendees – business leaders, state legislators, contractors, bankers, lawyers and representatives from the hospitality, sports and entertainment industries. 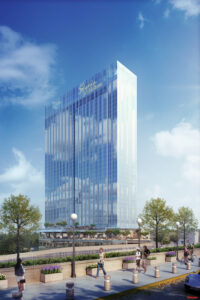 A rendering of the Signia by Hilton Atlanta hotel that is under construction next to the Georgia World Congress Center (Special: GWCC)

“We are back,” declared Gary Steffen, global brand head for Signia by Hilton, which will be the flag of the new hotel. “We are actually going to be putting shovels in the ground for the very first Signia hotel in the world.”

Hilton unveiled plans for its new Signia brand in February 2019, but the 40-story Atlanta hotel is the first to move forward – largely because of the one-year hiatus caused by the Coronavirus pandemic.

“People are coming back to travel,” Steffen said. “Looking at Atlanta, looking at this site, it’s perfect. This campus has so much energy with the stadium, the convention center and entertainment.”

Frank Poe, GWCC’s executive director, said the hotel project has been in the works for nearly a decade. GWCC will own the hotel, a project estimated to cost between $450 million and $500 million. Working with Citi Group, a $400 million bond offering for the hotel on March 25 received $8.2 billion in orders. Citi told GWCC the project was a “bellwether for the bond industry and unprecedented.”

Poe credited both Gov. Nathan Deal and Gov. Brian Kemp, among others, for supporting the project.

Lt. Gov. Geoff Duncan, who received a standing ovation after he was introduced, spoke of how the hotel project would contribute to Atlanta’s and Georgia’s hospitality ecosystem. 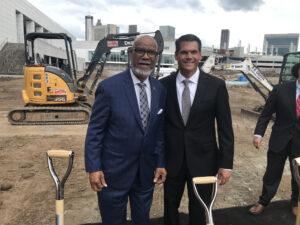 Mark Vaughan, executive vice president and chief sales officer of the Atlanta Convention & Visitors Bureau, said the hotel “will enhance our position as one of the top meeting and convention centers in the United States.”

Vaughan said Atlanta currently ranks as the No. 4 among convention cities in the United States after Las Vegas, Chicago and Orlando.

“Our championship campus continues to grow,” Vaughan said. “Hospitality is the gasoline that runs a lot of the economic engines here in Atlanta.”

Before the pandemic, Atlanta had 57 million visitors a year – which fueled a $16 billion industry that employed about 300,000 people. He said the new hotel will translate into “more meetings, more conventions, more sporting events, which creates more jobs and more opportunities. It’s going to be phenomenal.”

The Signia by Hilton Atlanta hotel is expected to open in 2023. 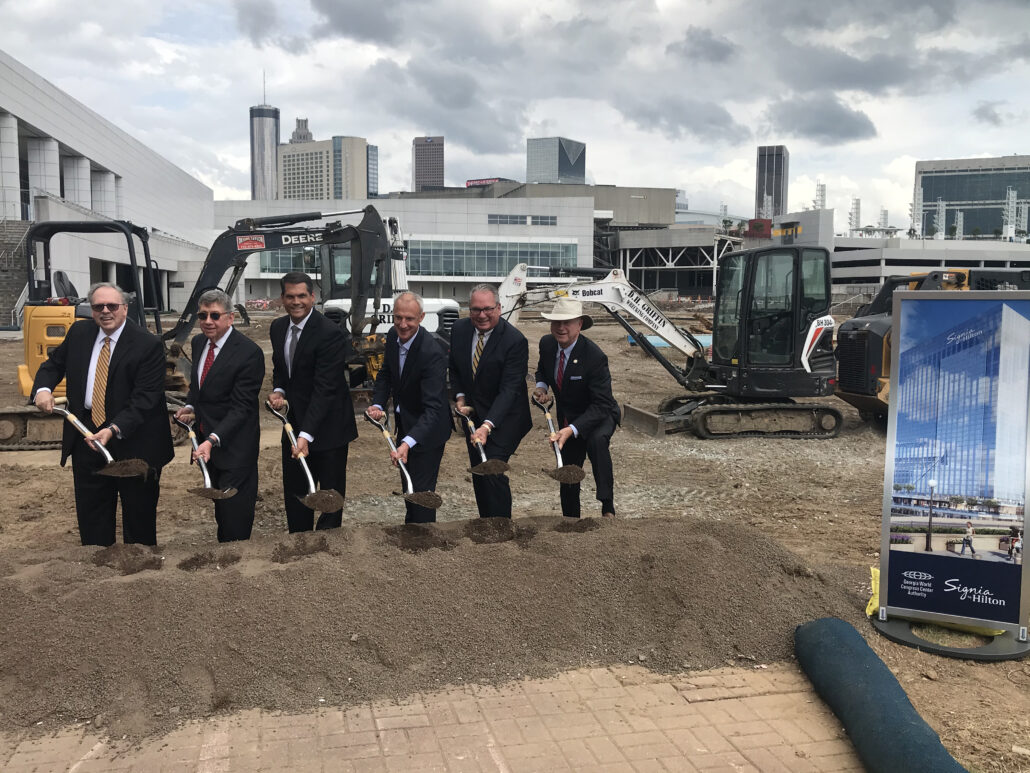