The only executive director the Georgia World Congress Center has ever known — Dan Graveline — announced today he is retiring at the end of the year. 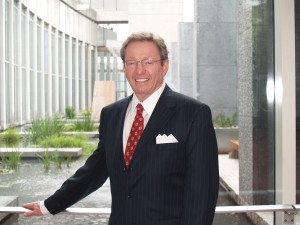 He will cap off his 33-year career by working until midnight, Dec. 31 at the Georgia Dome’s Chick-fil-A Bowl game.

It will culminate an amazing career by one of Georgia’s unsung public servants.

Graveline, 68 as of July 1, was named general manager of the GWCC in 1976 before the facility had even opened.

What now is known as Phase I, or Building A, opened in September, 1976, and the development of the center has continued for Graveline’s entire 33-year tenure.

See Graveline wasn’t your typical government bureaucrat. Instead, Graveline has been as much of a real estate developer as one can be and still work for the state of Georgia.

The GWCC expanded three times in those years — in 1985, 1992 and 2003 — making Atlanta one of the top convention destinations in the country. As other cities would develop their convention centers, the GWCC would expand its facility.

Nationally, the GWCC has been recognized repeatedly as one of the best run convention centers in the country.

I got to really witness his skills in action during the building of the Georgia Dome, one of the more complicated developments that I have ever covered with numerous twists and turns.

The Dome first was conceived to be a private venture with 10 friends of then Atlanta Falcons owner Rankin Smith each putting up $1 million as a downpayment on the building.

The group had put together a revenue bond package that would have financed the construction and operations of the building with revenues generated from the facility.

Eventually, it became obvious that the state could become a real partner and back up those bonds. The hospitality community also committed to increase the hotel-motel tax to help pay off the bonds for the Georgia Dome.

Throughout that process, Graveline crossed hurdle after hurdle to help make the Dome a reality. One of the biggest hurdles was working with the Vine City community and two black churches that were going to be impacted by the Georgia Dome.

The GWCC initially faced incredible community opposition to encroachment of the Georgia Dome in their front yards.

At a meeting of the GWCC Authority, Graveline explained the community’s point of view. I came to appreciate how adeptly Graveline ran the authority during that meeting.

Graveline would present the problem in full, uncomfortable detail so authority members could grasp the issues at hand.

Then, he would present a possible and well-thought-out, solution to the problem. But he also invited board members to chime in with their own thoughts and ideas so they could buy-in to the solution. It was a “give me the bad news first” strategy.

In the case of Vine City, the solution was to set aside $10 million of the Georgia Dome’s development costs to help revitalize the community.

The board, usually made up of a group of conservative businessmen, gave its blessing.

Graveline used similar skills in the development of Centennial Olympic Park, an idea inspired by Olympics chief Billy Payne with the support of top Atlanta business and philanthropic leaders.

Because of Graveline’s reputation, it was determined that GWCC should develop and operate the 21-acre park.

“The park to me is one of the most unique and interesting things I’ve ever done,” Graveline said in an adhoc interview today after announcing his retirement at the GWCC board meeting. “What a great asset that has turned out to be. It doesn’t make a dime. But it has generated billions of dollars of development. It’s become the center of gravity.”

Graveline admitted today that it was those kind of projects he loved most.

“Every time it tends to get a little monotonous, something new pops up,” Graveline said.

When making his decision to retire, Graveline said he had to ask himself the question: “If I stay a little longer, could I do one more thing? But there’s no end to that.”

Yes, there is more to do. The GWCC has been working on a master plan for its future growth including the possibility of a new football stadium, a project that could take 10 years or more to complete.

So Graveline decided that instead of waiting for that next project, whatever it might be, it was a good time to retire.

“We did accomplish a few things on my watch,” said Graveline, who added it has been a satisfying and rewarding career with lots of fun.

“It’s not so much what Ihave done for this place,” Graveline said. “It’s what this place has done for me.”