The family of H.J Russell & Co. has selected James “Jay” Bailey as president and CEO of the Russell Center for Innovation & Entrepreneurship based at the company’s former headquarters. 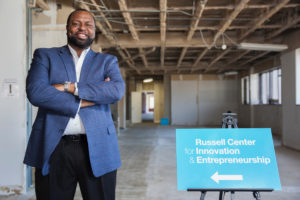 Jay Bailey at the Russell Center for Innovation & Entrepreneurship, which is under construction (Photo by Cliff Robinson, courtesy of RCIE)

“Growing up in Atlanta, Herman Russell was one of my greatest heroes,” Bailey said. “I am honored to have this opportunity to build on his incredible legacy, paving the way for the next generation of doers, innovators and job creators.”

Bailey joins RCIE with more than a decade of leadership experience in the non-profit and economic empowerment space. Atlanta’s Boardwalk Consulting of Atlanta led the search.

And before Greenwood Archer, Bailey served as CEO for the Southeastern Region of Operation HOPE, a global nonprofit organization focused on financial literacy. Bailey helped grow the Southeastern region from a single person office in 2007 to 19 offices by 2015 – serving more than 160,000 youth, adults and families start businesses, buy homes, raise credit scores and increase their financial dignity.

“We are excited about folding Jay’s vision for RCIE in with the vision of two generations of Russells, who have been plotting and planning RCIE since the initial announcement in 2016,” said Jerome Russell, president of H.J. Russell & Co. and chair of the RCIE board. “He brings the experience, passion and energy we believe necessary to lead the Russell Center for Innovation & Entrepreneurship from concept to reality.” 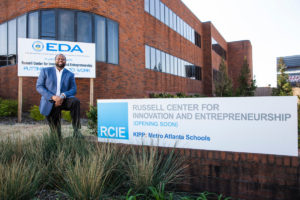 Jay Bailey in front of the future Russell Center for Innovation & Entrepreneurship on Fair Street (Photo by Cliff Robinson, courtesy of RCIE)

“Much more than another accelerator or incubator, we want RCIE to become the epicenter of economic advancement and entrepreneurship for under-represented communities across the country,” Bailey said. “It’s so fitting that it will evolve in the former H.J. Russell & Co. headquarters at 504 Fair Street on Atlanta’s Westside.”

“RCIE will be a game changer for entrepreneurs in the city of Atlanta and beyond, connecting the next generation of revolutionary entrepreneurs to the tools and relationships needed to turn dreams into reality,” he said.

The Russell family and its companies have been among the leading African-American business leaders in Atlanta and the nation.