Back in 2006, Habitat for Humanity International moved its administrative headquarters from Americus to downtown Atlanta.

So how has the relocation of its headquarters worked out for Habitat?

“It’s been a home run,” said Jonathan Reckford, CEO of Habitat International, a top-15 charity in the United States. “It has helped in our recruitment and retention of the people we can get here. We’ve got some terrific people.”

Americus, where Habitat was founded in 1976, is a community of 18,000 in south Georgia. Being headquartered in Atlanta not only helps in getting top employees, Hartsfield-Jackson International Airport makes it much more convenient for the nonprofit to travel to spots around the country and the world.

Reckford gave the Thanksgiving message at the Rotary Club of Atlanta on Monday. 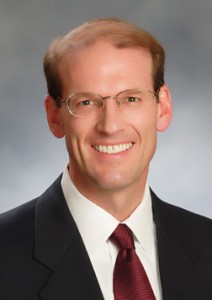 “Focus on what we have rather than what we lack,” Reckford said. “If more and better are our ultimate goals, we will never win that pursuit.”

Reckford’s own life story is a case in point. He began his career on Wall Street working for Goldman Sachs. He also was an executive with Marriott, the Walt Disney Co., Circuit City and Best Buy.

But he eventually realized that the corporate world was not for him. He was a devout Christian and he helped coach pastors with the management side of church life. Finally, in 2003, that volunteer served became a full-time ministry as executive pastor of a 4,300-member church in Edina, Minnesota.

Then in 2005, Habitat International was searching for a new CEO; and Reckford was selected to lead an organization that married both his executive skills and his altruistic inclinations.

Reckford urged Rotarians to express their gratitude to their family, friends, mentors, colleagues, children and even to strangers and people who may be suffering somewhere in the world.

He also introduced the concept of “holy discontent.”

“Our world is full of discontent,” Reckford said. “We shouldn’t be content with the state of the world.”

In the question and answer portion of the program, Reckford said that the country building the most Habitat homes today is the Philippines. But Indonesia has a goal to build 100,000 Habitat homes in the next few years. Today “about 90 percent of our work is outside the United States,” Reckford said.