Your phone buzzes. Car horns blare. A new email in your inbox. The responsibilities of daily life can make it difficult to carve time out for creative endeavors, but in the mountains of North Georgia, there’s another way of life. Welcome to The Hambidge Center for the Creative Arts and Sciences.

Hambidge is nestled on 600 acres in the Blue Ridge, offering a space for artists to focus on their craft and take refuge from modern stressors in the mountains.

Every year, around 175 artists spend two to three weeks at Hambidge’s historic campus, disconnecting from the virtual world and its demands while reconnecting with nature, fellow artists and focusing on their medium of choice. The focus areas run the whole gamut here, including ceramics, culinary arts, dance, music, science, visual arts, writing and arts and culture administration. 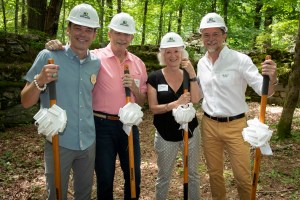 Jamie Badoud (left) and the team during the new Antinori Village groundbreaking. (Photo courtesy of the Hambidge Center)

“Hambidge is really about nurturing creativity but also removing you from your current life, filled with noise and distractions,” said Jamie Badoud, the center’s executive director of 13 years. “I think COVID has also shown us that it’s important to get out and disrupt those regular rhythms and be nurtured by nature.”

He continued, “You really need two weeks. You’re just starting to scratch the surface of that genius sitting inside of folks, but there are layers that you have to remove, and there’s no better place to do that out in nature.”

Hambidge was founded in 1934 by Mary Hambidge, a creative visionary and a professional whistler. Wherever she went, her pet mockingbird, Jimmy, was often in tow.

She initially turned the land into a sustainable farm and artist retreat, where she employed local women to create intricate weavings that would later be featured in the Smithsonian and MOMA. She believed that creativity is best nurtured in nature — a founding principle that is still upheld today.

Today, each artist is given a private studio to work and live in with no required workshops or critiques — it’s the artists’ time to rejuvenate, experiment and create. 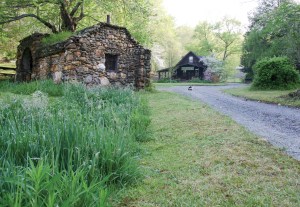 The grounds are rustic. There are no street lamps and Wi-Fi is limited to communal areas. Residents are encouraged to take full advantage of the outdoors with miles of trails, green spaces, waterfalls and a swimming hole.

Only eight artists are at Hambidge at a time or, as Badoud puts it, “the number of people who fit around a dinner table.”

Having such a small group is key, Badoud said, because communal vegetarian dinners are a staple for the program, allowing the visitors to use conversation as a tool of exploration, bouncing ideas off one another and creating friendships.

“Never have ideas flowed so quickly for me. Never had I had so much uninterrupted time to explore and focus on my art,” musician Sally Anne Morgan wrote. “One of my unexpected favorite parts of the residency was dinner and discussions with other artists, in their respective mediums, comparing process and struggles, play and routine.”

It’s the oldest residency program in the Southeast and, with a dinner-table rule of thumb and a good reputation among artists, the application process has gotten competitive. Hambidge has three application windows each year, accepting between 15 to 20 percent of the artists who apply.

Residency costs $250 per week, but artists can apply for fellowships that cover the cost and even receive $700 to participate. Hambidge also offers financial aid for creatives who need help covering the fees to “truly remove barriers,” Badoud added. 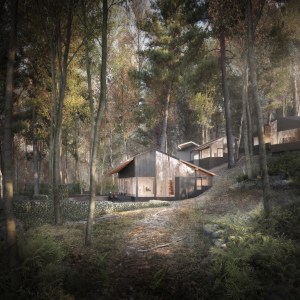 A rendering of the new Antinori Village. (Courtesy of BLDGS I DarcStudio)

Hambidge will soon have the capacity to activate more of the creative world, thanks to its $3.4 million capital campaign, which kicked off in 2019 and ended this month. The funds will allow the team to build the new Antinori Village and renovate some of the main campus.

This section of Hambige’s acreage, opening in October, will allow space for artists who aren’t in residency to convene and attend workshops.

“We’re really excited about the opportunity for this new space to be this incubator of ideas and a space where people are coming from all over the world to really do fun things,” Badoud said.

The team already has an idea in the works — a collaboration with sculptors and chefs where the two will experiment with cooking in clay or creating new flatware.

There’s still quite a bit of work to be done between now and its opening in October, but the Hambidge team is excited for the opportunities the expansion will bring.

Applications for the residency program are open until April 15 for the fall session, and creatives everywhere are encouraged to apply for the unique residency experience that only Hambidge can provide.

“People regularly say that in two weeks they’ll get over a year’s work done,” Badoud said. “In a lot of instances, they just reach places that they’ll never be able to get because we’re just trying to grab these creative crumbs in our daily lives. That shows just how important that time [away] is.”

Click here to learn more about all the Hambidge Center has to offer.

Watch the documentary below to learn more about Mary Hambidge, the center’s founder.