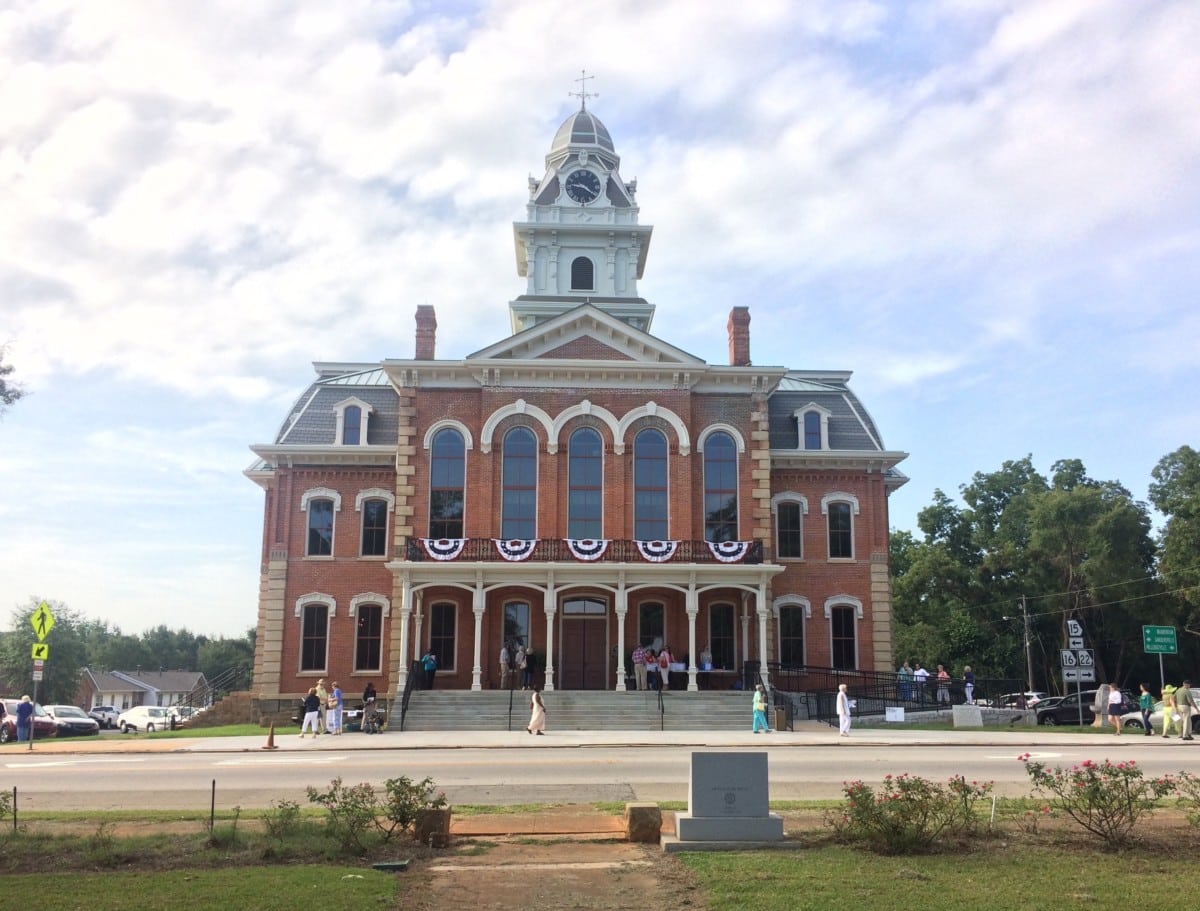 First in a two-part series. Next week: Sparta’s story a lesson for Atlanta’s Gaines Hall.

SPARTA, Ga. – Take note, Atlanta. The people in Sparta have found a way to cherish their city’s landmarks – showing what can be done when a community believes in preserving its past for future generations.

No building in Sparta tells the story better than the Hancock County Courthouse in the heart of this historic Georgia city. The courthouse is lovingly called “Her Majesty” – and she has become the town’s symbol of hope and rebirth.

Only a year before, the Georgia Trust for Historic Preservation had placed the building on its “Places in Peril” list – almost serving as a warning of the danger ahead.

Sistie Hudson, who took office as chairwoman of the Hancock County Board of Commissioners on Jan. 1, 2013, had been working with her colleagues to try to repair the dilapidated courthouse step-by-step, starting with the electrical system.

“We didn’t have a decent sprinkler system,” she said. “I had just gotten elected and taken office. There was lead paint. Immediately I tried to start with the wiring.”

As evidence, Hudson showed some photos of the building shot two days before the fire. It was a building that needed to be renovated and restored.

On the night of the fire, she cried when she saw the building swept up in flames. Some people from the Georgia Department of Transportation came to direct traffic. 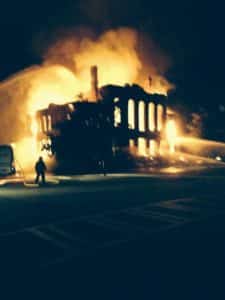 “One of the GDOT guys said: “Take it down.” Hudson warned him to step back. She was not going to let the centerpiece of Sparta’s history go up in smoke.

“It was my mission,” Hudson said. “It burned for three weeks. The clock tower was so hot that the 800 pound bell melted.”

Then a series of serendipitous events began to transpire. The structural engineer – Carter and Watkins – determined the walls were sound.

About a month after the fire, steel was placed to reinforce the exterior walls. Architects from the nearby City of Monroe showed up with yellowed rolls of architectural plans of the Hancock County Courthouse. They had secured them in the 1990s when they were renovating the their county’s courthouse.

“The Watkins County Courthouse in Monroe and this one are sisters,” Hudson said. “They were designed by the same architect.”

Because the architects had the plans and because they had been involved in about 20 courthouse renovations in Georgia, Hancock County hired the firm of Carter-Watkins Architects – better known in town as Ben Carter and Joe Watkins.

“The process got a little easier when we found out the building was structurally sound,” Hudson said. “Things fell into place. We had to move very quickly to get the process started.”

Two months after the fire, a large sign declared to the community that the Courthouse would be rebuilt. 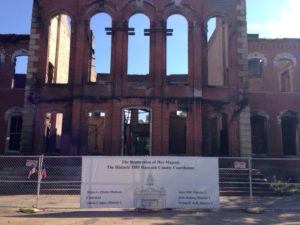 Mark McDonald, president and CEO of the Georgia Trust, interrupted to make sure proper credit was given.

“Sistie is the one who pushed it,” McDonald said. “She took political heat for it.”

Hancock County also was fortunate that it had bought replacement fire insurance for the building from the Association County Commissioners of Georgia. After three different insurance adjusters had assessed the damage, Hancock County received a total of $7.2 million to reconstruct “Her Majesty.”

The project is defined as a reconstruction because it is true to the history of the building, but it has all the modern amenities of a new building. Of the $7.2 million, $1 million was spent on code compliance.

“We are totally compliant with building codes,” Hudson said. “We weren’t before. We call it a sliver lining of a really dark cloud.” 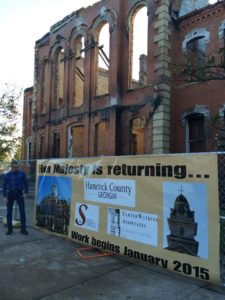 Had it been up to the county to pay for the reconstruction, Hudson acknowledges it wouldn’t have happened.

“This county could not have afforded the reconstruction,” she said. “We would have had to move to a Butler building somewhere.”

On Aug. 11, 2016 – exactly two years after the devastating fire – Hancock County cut the ribbon of “Her Majesty.”

Hudson was in her office on Saturday, Aug. 27 welcoming about 500 people who had signed up for a Georgia Trust tour of the historic gems in Sparta. Naturally, the tour began at the courthouse, and Hudson was holding court as friends and fans entered her office.

“Isn’t this wonderful?” asked Hudson, without waiting for an answer. “It’s certainly a pleasure to go into work.”

She pointed to wooden bowls that adorned her office. “I wasn’t able to save my magnolias,” Hudson said of the trees in front of the courthouse. “But these bowls were made from their wood.”

Hudson also handed out glass bottles decorated with a design of the courthouse. She explained that a company in Sparta does the designs on perfume bottles, and she always looks for ways to promote Hancock County, which has been home since she was 2 years old.

Meanwhile, Hudson is not finished.

The county is turning the town’s old railroad station into a tourist center. That is near the house that Robert and Suzy Currey bought and where they have started an organic farm. Ironically, lunch was served on their property during the tour – local barbeque, but they couldn’t partake because they are both vegetarians.

Several other elegant homes and buildings also are available to  be restored. And Hudson looks out her office window and focuses on several properties around the Courthouse.

“I want the entire block to be redone,” she said. “I’m just a huge Hancock County history buff.”

Georgia Trust’s Mark McDonald thanks Sistie Hudson for her work to save ‘Her Majesty.’ (Photo by Maria Saporta) 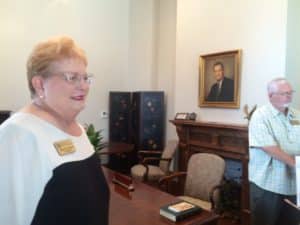 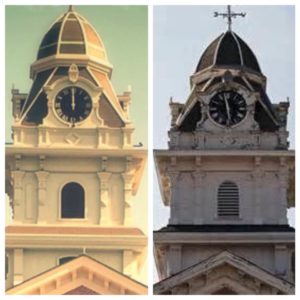 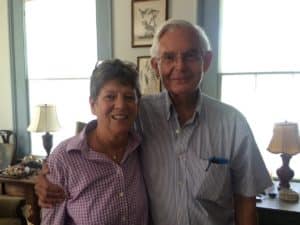 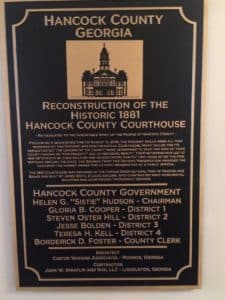 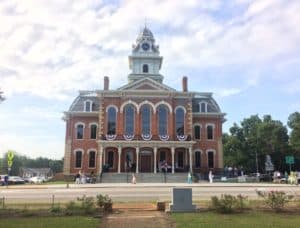 The second column in the two-part series: Questions threaten future of Gaines Hall