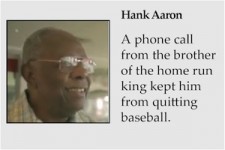 If Henry Louis “Hank” Aaron had not taken a Moment in 1952 to walk off the baseball field and take a long-distance call from his brother, Major League Baseball would have missed the humble and charming reign of its home run king.

Hank was a mere 18 years old, fresh out of high school and playing for the Negro League’s Indianapolis Clowns on his first professional contract. Many of his teammates were much older than him – some older than 50 – and they didn’t share his struggles to adjust to life away from his large family of seven brothers and sisters. Traveling from town to town by bus from Indianapolis proved difficult for the former high school championship player. Growing up poor in Mobile, Alabama’s “Down the Bay” neighborhood, Hank had strengthened his legendary swing by swinging at bottle caps with homemade sticks and by picking cotton on a nearby farm.

“I wasn’t just homesick,” Hank said. “I was homesick,” he told us when we filmed his Moment two weeks ago at the Turner Field’s 755 Club. “I wanted to see my mother and go home to my brothers and sisters – I had never been away from home that long,” he said. “I was about to cash the few pennies I had in to go home because I just didn’t feel like I was wanted.”

When his brother Herbert, who was training at Ft. Benning, Georgia’s army base, heard the news from their mother, he invested in a long-distance phone call that helped rewrite baseball history.

Hank was practicing on a Minneapolis baseball field when someone told him he had a call. Having not heard from his brother in a while, Hank ran to pick up the phone, not believing at first that it was Herbert’s voice on the other end. Herbert said, “I don’t have very long to talk to you, but you know how serious I am about this. You are in the best situation that you ever were in. Stay there all you can, and play baseball like I know that you can.” 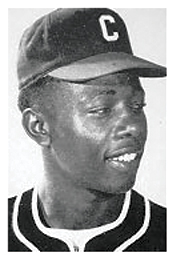 Hank Aaron when he was on the Indianapolis Clowns

He told Hank to focus on baseball and forget about what was at home – “because mama and daddy are getting along just fine.”

For Hank, that was all the encouragement he needed to hear. “That was the Moment that really turned my whole career – and everything in my life that I had ever done – around,” he said. “There was no back-up plan – that was it. I stayed that way for a good few years – lonesome from my family.”

While they may have been difficult years away from his family, suffering indignities heaped upon minority players in the Jim Crow era, Hank began to improve his game, changing his swing, his stance and his attitude. After helping lead the Indianapolis Clowns to the 1952 Negro League World Series championship, he received two offers to become the fifth African-American player in the major leagues. One offer would have made him a teammate of Willie Mays on the New York Giants. The other, offering $50 more a month, was from the Boston Braves. He chose the higher pay.

Playing in the minors, Hank was named the Northern League Rookie of the Year in 1952 and MVP of the South Atlantic League in 1953. Then, in March 1954, he got his big break – outfielder Bobby Thompson broke his ankle during spring training and Hank moved into the Braves’ starting lineup. The power hitter quickly earned a full-time starting position.

He earned his first National League batting title in 1956 with a .328 average, was named National League MVP in 1957, and hit a walk-off 11th inning home run against the Cardinals to send the Braves to the World Series, where they beat the Yankees. A team PR executive suggested that Henry Aaron adopt the name “Hank” to seem more approachable and the moniker stuck. The team moved to Atlanta in 1966.

All sports fans know where they were the night of April 8, 1974. I was with my high school classmate, Charles Driebe, attending a nighttime bricklaying class at Atlanta Area Technical School, 2.8 miles west of Atlanta Fulton County Stadium, where a standing-room crowd of 53,775 stood up when Hank approached the plate in the fourth inning. We were among 20 students of different ages and races standing on the outside deck huddled around an AM radio, listening to Milo Hamilton as he described the Moment Hank came to bat. When Hank hit his 715th home run, passing Babe Ruth’s all-time home run record against the Cincinnati Reds, we all stood in awed silence, hearing the roar of the crowd and watching the fireworks explode above the stadium.

Hank’s remarkable baseball career continued and he finished out 1974 with 20 home runs. By career finish, he had become baseball’s all-time leader in RBI’s at 2,297 and he held the home run record of 755 career home runs. In 1982, he was named to Baseball’s Hall of Fame with a nearly unanimous vote – 97.8 percent of the votes cast.

Today, his legacy reigns with statues standing prominently outside of Turner Field – which sits at 755 Hank Aaron Drive – and banners throughout the stadium. To honor future players in his name, Major League Baseball’s Hank Aaron Award is presented annually to the all-round best players in the American and National Leagues.

Hank’s post-baseball career includes serving as senior vice president of the Atlanta Braves, owning several car dealerships and restaurant franchises throughout Georgia, including brands such as Popeye’s, Krispy Kreme and Burger King. But his business success and his baseball legacy were forever saved – thanks to his brother’s urgent phone call in 1952.

He later told Herbert the importance of that call that pulled him off the baseball field, saying, “If it wasn’t for that call, your brother that you’re looking at now – Most Valuable Player one year, MVP of the World Series and etc, wouldn’t have had the opportunity,” he said.

“I don’t know what would have happened,” he said. “But he gave me the right advice.” 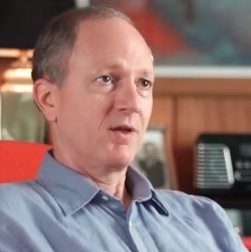 Next week in Moments: Charles Driebe

Next week in Moments: Charles Driebe, on the Moment his family told him it was time to straighten out his life.