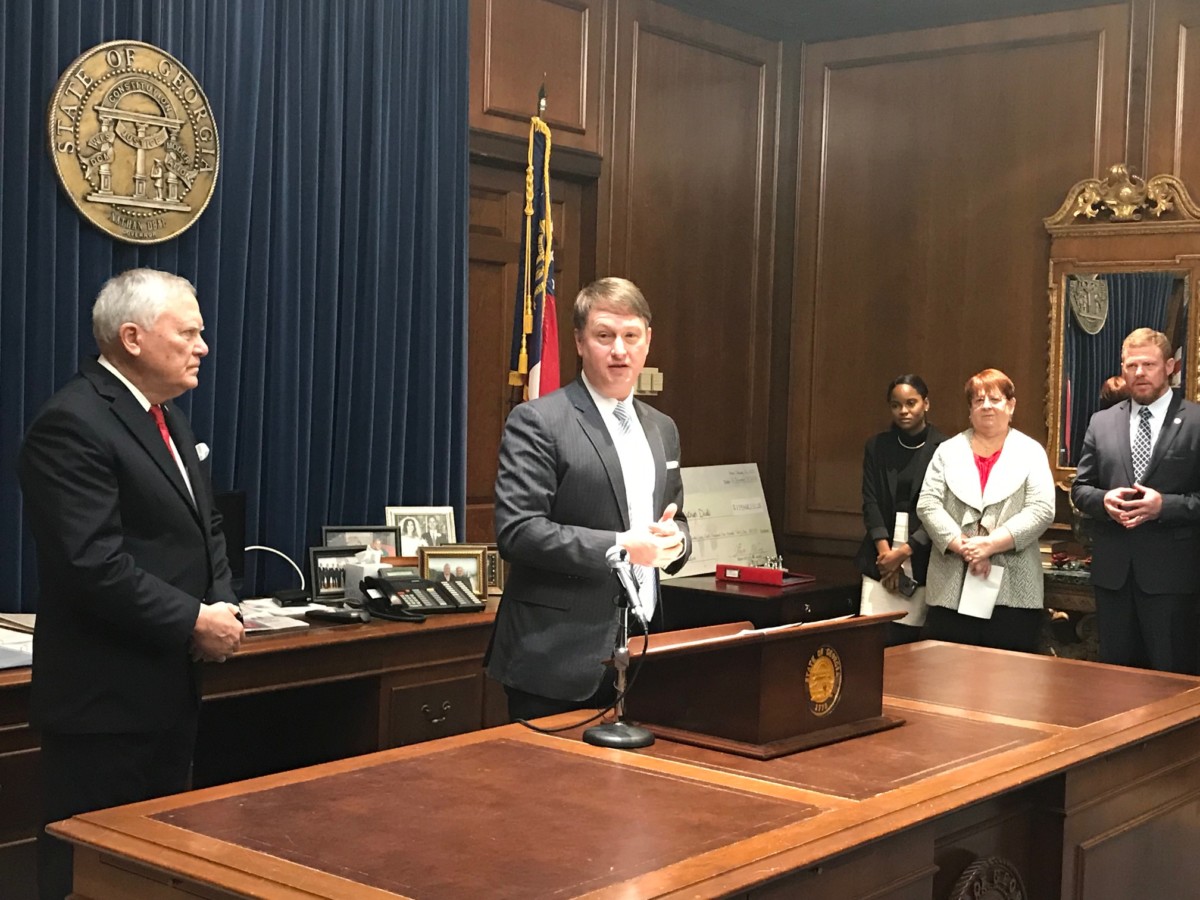 Pat Wilson, commissioner of the Georgia Department of Economic Development, talks about the Hapag Lloyd announcement while Gov. Nathan Deal, Gwinnett County Chair Charlotte Nash and Chris Riley, the governor’s chief of staff, listen at the press briefing in the governor’s office on Tuesday (Photo by Maria Saporta)

A multinational transportation company said it plans to expand its footprint in Gwinnett County and add more than 360 jobs in the process.

Gov. Nathan Deal said Tuesday that Hapag-Lloyd America LLC said it will create 363 jobs and invest $5.5 million in an expansion of the Hapag-Lloyd Quality Service Center in Peachtree Corners. New jobs will include positions in administration, technical support and customer service, the company said.

Germany- based Hapag-Lloyd, which merged with United Arab Shipping Company in May 2017, employs approximately 12,000 individuals and operates 394 offices in 127 countries. The company, which is in the top four shipping companies that operates out of the Port of Savannah, had considered several locations – including Charleston, for the expansion. 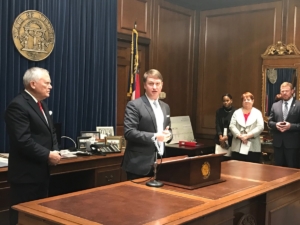 Pat Wilson, commissioner of the Georgia Department of Economic Development, talks about the Hapag Lloyd announcement while Gov. Nathan Deal, Gwinnett County Chair Charlotte Nash and Chris Riley, the governor’s chief of staff, listen at the press briefing in the governor’s office on Tuesday (Photo by Maria Saporta)

Following this expansion, the Hapag-Lloyd Quality Service Center will handle the majority of the company’s non-sales related activities in the U.S. and enable the company to further improve its customer experience and service delivery.

Uffe Ostergaard, Hapag-Lloyd’s president of its North America region, said the company has been active in Georgia since 1987.

“It will be exciting to see more than 600 jobs for Hapag-Lloyd in Georgia,” Ostergaard said during a press conference held inside the ceremonial office of Gov. Nathan Deal. “We have chosen Georgia for many reasons – education, access to qualified people, connectivity, the level of collaboration and also Southern hospitality.”

“We are very pleased that over the last 18 months, we’ve announced the creation of almost 2,000 jobs in Gwinnett County.”

Pat Wilson, Georgia’s commissioner of economic development, said the announcement showed the importance of the state as a logistics center – following upon last week’s announcement by the Norfolk Southern railroad to move its corporate headquarters to Georgia.

Over the last few years, Gwinnett has lost a couple of high visibility corporate headquarters – NCR Corp. (NYSE: NCR), which moved to Midtown, and WestRock Comp. (NYSE: WRK), which moved to Sandy Springs. Both companies said they wanted their offices to be convenient to the MARTA rail line in order to be more attractive to prospective employees.

Gwinnett County will be voting on March 19 whether to join the MARTA system, and Nash said she is looking forward to “seeing a positive vote” in her county.

“With the changes coming to Gwinnett, it’s important to include all transportation options,” Nash said. “It will be helpful to have some options that we do not have now.”

“From our perspective, (MARTA) is something we need,” he said. “That’s an endorsement from our side.”