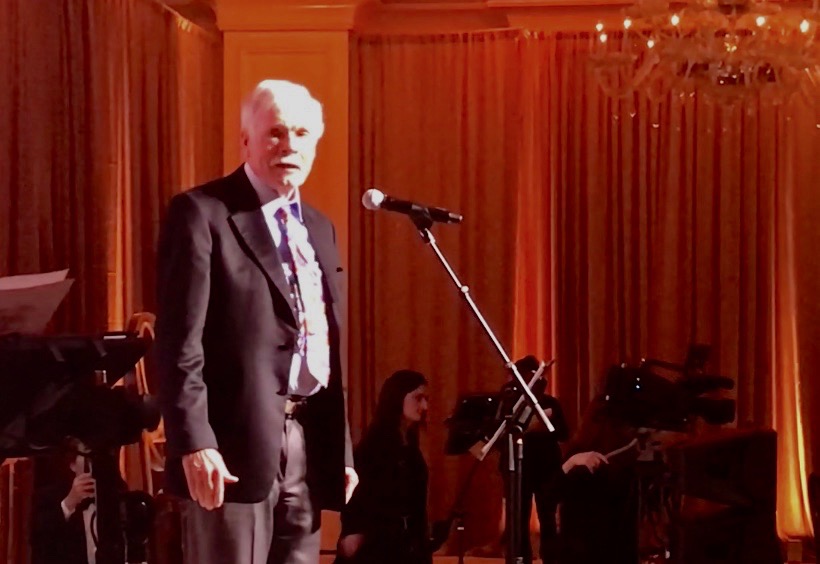 In life, we meet a few special people who stand out above the rest.

For me, one of those special people is Ted Turner – someone who has changed our nation’s media landscape and someone who has done all he could to make the world a better place.

Because Turner titled his autobiography “Call Me Ted,” I’m going to respectfully refer to him as Ted in this column – instead of using his last name. 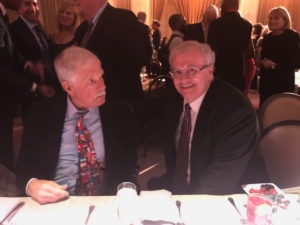 At Ted’s birthday party Saturday night (his actually birthday was two days later on Nov. 19), it was obvious that I am not alone in my appreciation for a man who has taken on global issues – world peace, climate change, overpopulation, endangered species, international communications – to name a few.

Terry McGuirk, who worked side-by-side Ted for 25 years, called him a “genius” who “could see around corners.”

Although McGuirk said he no longer has a close relationship with his former boss, he continues to place Ted on a pedestal.

“What he did in the 70s and early 80s changed the cable industry and how consumers receive programming and information,” McGuirk said. “It was just as big as the internet revolution of the 90s and the digital revolution of today.”

McGuirk, who is now president of the Atlanta Braves, also reminisced about their days together when he was Ted’s second-in-command as they transformed a small UHF Atlanta television station into an international media empire.

“We probably talked every day, seven days a week for 25 years,” McGuirk said. “That’s how I learned to think like Ted. We had to think alike.”

Christiane Amanpour, an acclaimed international journalist for CNN, said Ted was one of the greatest people she had ever met. She also marveled at all his global accomplishments. 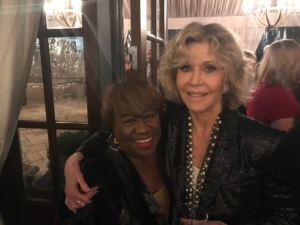 For Turner, the 80th birthday bash must have felt like his life flashing before his eyes. A wide array of friends, family, admirers and co-conspirators came to toast Ted – for all he has done and all he will do.

All three of ex-wives were present as were many of his girlfriends.

Peter Dames, Ted’s roommate at Brown University and a friend for 62 years, said that Ted told him to “Stand by me and get rich.”

“I did, and I did,” Dames said. “All of us in this room were enriched by knowing Ted.”

After getting a chance to say hello to Ted, Schuerholz repeated his conversation. “He told me: ‘We won a lot of baseball games together.’” Schuerholz said. “It was so much fun getting to know him.”

“This might sound like a eulogy, but it’s meant as a toast,” Johnson said from the stage. “In my opinion, no other person has quite occupied such a place on this planet.” 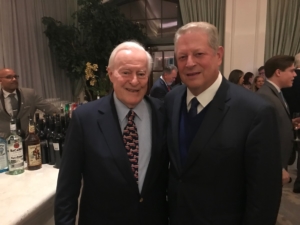 From his save the world from threats of mass destruction, there was former U.S. Sen. Sam Nunn, former co-chairman and CEO of the Nuclear Threat Initiative, and Nunn’s successor – Ernest Moniz.

From the UN Foundation, there was its former president and CEO – Tim Wirth, and his successor – Kathy Calvin.

Speaking to Ted, Calvin said: “You always say we are a world of neighbors, not a world of foreigners.”

From the Turner Foundation – one of his environmental philanthropic entities, there was Michael Finley, its longtime president who retired from that role in 2016. He is succeeded by Judy Adler, who toasted all the once-endangered animals that Turner helped save.

But perhaps the one who stood out the most was former Vice President Al Gore, who has been a tireless advocate for addressing the dangers of climate change.

“As the years pass, Ted’s position the history of our country and world grows larger and larger,” Gore said in a brief chat before the dinner. “There’s simply no one who is a better or more loyal friend than Ted Turner. We have worked together for 40 years. I’m so glad we’ve become fly-fishing buddies.” 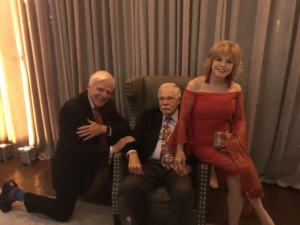 Former President Jimmy Carter toasted Ted in a video. Former Atlanta Mayor Andrew Young, who also was the U.S. ambassador to the United Nations under Carter, came with his wife Carolyn. Atlanta businessman Charlie Loudermilk was there. And Rubye Lucas, the widow of Bill Lucas (who Ted had made the first African-American general manager in Major League Baseball), was there. She also had been an executive with Turner Broadcasting.

Entertainer Jesse Itzler, who now owns a piece of the Atlanta Hawks, served as emcee.

Then there were those who have worked by Ted’s side for decades – such as Taylor Glover, president and CEO of Turner Enterprises.

“You have been my close friend for over 40 years,” Glover told Ted, remembering one of Ted’s key principles. “You can’t always be right, but you can always be on time.”

George McKerrow, who co-founded Ted’s Montana Grill, spoke of how his business partner had enriched his life. 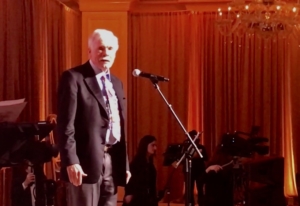 And then Debbie Masterson, a vice president of Turner Enterprises who has helped manage Ted’s work life for decades, gave a David Letterman-style Top Ten list of what it was like to work with Ted.

No. 4 was “Exercise in Patience.” She complained about Ted asking the same question over and over again. “It’s not because of memory loss,” Masterson said. “This has been going on for 34 years.”

His five children also toasted their father, and his name sake – Teddy Turner – even called him: “Captain, my captain.” There also were comments from: Rhett Turner, Jennie Turner Garlington, Beau Turner and Laura Turner Seydel.

At one point in the evening, his third ex-wife – Jane Fonda – sang a song for Ted along with musician Jim Averitt. The refrain included: “Your heart is as big as the Montana sky.” Then she told her third ex-husband: “Ted, the world is a better place because of you.”

Before the dinner, Fonda was asked about Ted. “I love him a lot,” Fonda said. “I’m a year older than he is, and he never lets me forget that. We are very close. I’m so glad that I’m here tonight.”

When Ted got up on stage to sing a couple of songs with the audience, he said: “It’s the sweetest night I’ve had in my life.” 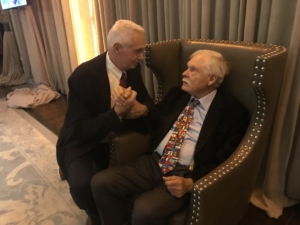 Then referring to his dementia, he said he hoped he could remember the words to “My Old Kentucky Home” and “Home on the Range.”(See the video).

Over the years, I’ve had the pleasure to interview Ted on many occasions, including an hour visit with him on Nov. 6. I have witnessed so many high points and low points in his business, philanthropic and personal lives. And my admiration only continues to grow.

I have long felt Ted Turner deserves to be honored with a Nobel Peace Prize and with the Presidential Medal of Freedom. While Ted may not yet have been fully rewarded for all his contributions on Earth, his 80thbirthday party was a step in the right direction.

Happy Birthday Ted Turner! And a Happy Thanksgiving to one and all. 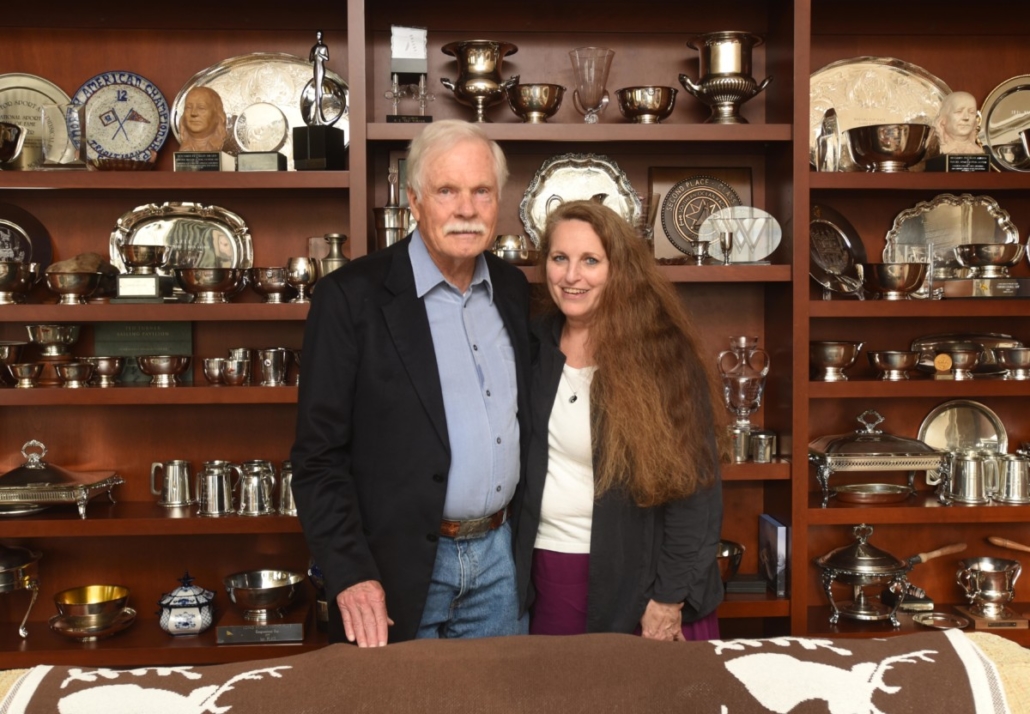 Ted Turner with Maria Saporta after the Nov. 6 interview (Photo by Joann Vitelli of the Atlanta Business Chronicle)

Ted Turner sings “Home on the Range” from SaportaReport on Vimeo.