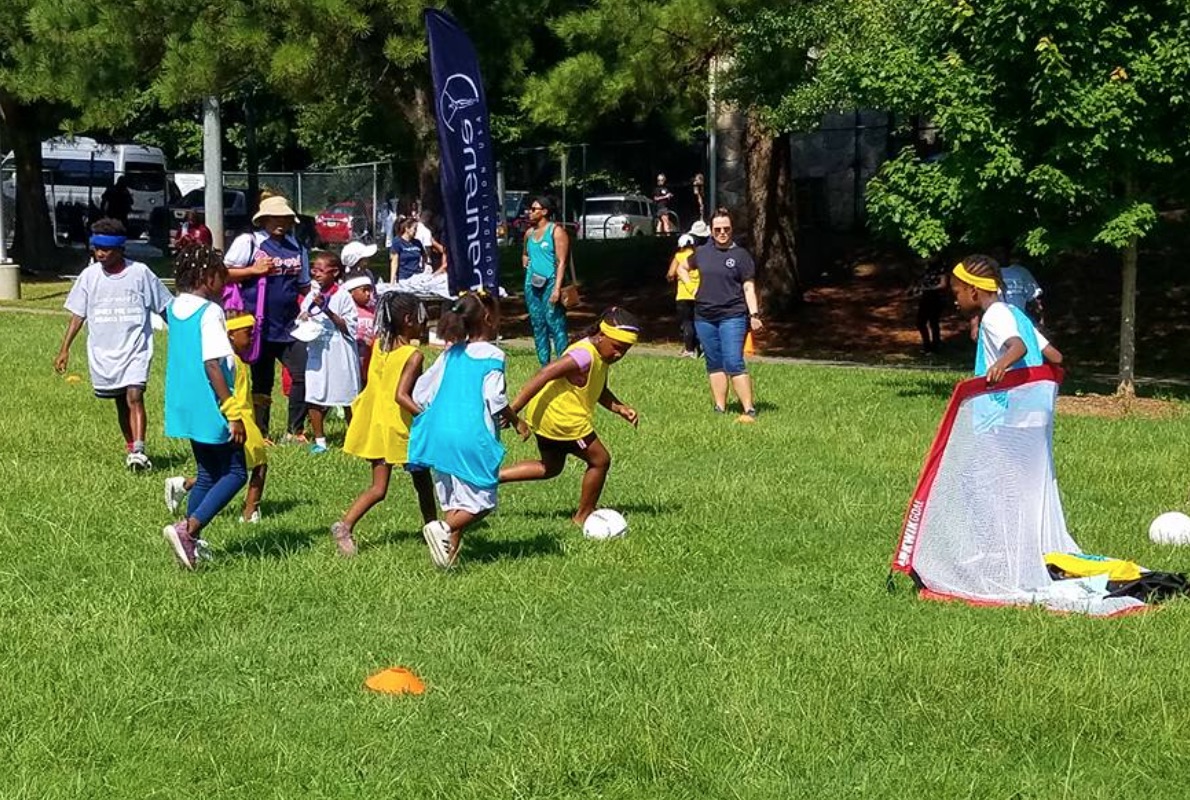 By Guest Columnist JILL ROBBINS, chief program officer for the non-profit Soccer in the Streets

Judging from the headlines, you’d think there’s no such thing as happy news on the refugee front. As someone who works directly with refugee kids in Clarkston, I can tell you there is so much more to the story. I see happiness in the faces of refugee kids every day in my role as chief program officer for Soccer in the Streets, where I have worked in youth development for more than 20 years. 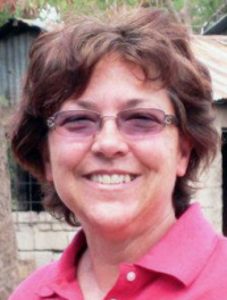 Founded in 1989 in Atlanta, Soccer in the Streets uses soccer as a medium to help at-risk kids access the opportunities they deserve. Soccer is a natural medium for bringing people together, because you don’t need to be a certain height, or age, or gender to play. It is accessible and equitable.

All you need is a ball.

When our coaches roll out a soccer ball at Clarkston Community Center, it opens a door with the refugee kids who play there. The trust is instantaneous. The soccer ball is at once a currency, a language, and a bond. It’s almost like a handshake for the kids.

Of course, it helps that soccer is the “global game,” which means it is recognized – and played – by children from every continent.

When these children play, they forget about the trauma they’ve experienced. Some of them escaped war, violence, and famine in their home countries. Many of them lived in crowded refugee camps for years before moving to a new country where they didn’t speak the language or understand the customs. They have experienced more trauma as a child than I can fathom as an adult. Yet, when they play, they are just kids, having fun.

While they’re having fun and learning soccer skills, our coaches sneak in some life skills as well, like cooperation, communication, and making positive choices. Throughout our metro Atlanta programs, we invite parents to participate as team managers, snack coordinators, and paperwork collectors. At the end of the season, we host friendly matches between the kids and their parents and coaches. 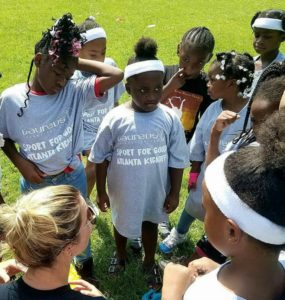 At an event in July, children in the Soccer in the Streets programs gather for a quick pep talk with their coach. Credit: facebook.com/soccerstreets

As the kids get older, they often take on more responsibility, as referees and coaches, and can earn money and certifications for doing so. In fact, three of our coaches and more than 10 referees at Clarkston started playing soccer as kids right there, at the community center.

These “new American” kids often lack many basic necessities that we take for granted, but they are grateful to have a roof over their heads, to have good food to eat, and to be able to play with a real soccer ball. They want to do well in school, they want to work, and they want to help others. At Soccer in the Streets, our goal is to equip them with the skills, confidence, and character they need to make their own dreams come true.

Soccer in the Streets currently reaches 4,500 children at 27 sites (and growing!) in and around Atlanta, including parks, schools, and community centers – and MARTA’s Five Points Station. We never charge registration fees for our programs, and we rely on charitable donations to maintain and expand our programs. And while soccer balls aren’t particularly expensive, they don’t last very long, especially on the dirt, gravel, and asphalt surfaces where many of our kids play.

Fortunately, the #PlayTogether project just launched in June, on World Refugee Day. One World Play Project is aiming to donate 2,000 ultra-durable One World Futbols to Soccer in the Streets and five other organizations that bring the healing power of play to refugee youth in the US, Mexico, Greece, Italy, Uganda and South Sudan. The One World Futbol itself was inspired by video footage of refugee kids playing soccer with a ball made from trash and twine. Supporters can donate a ball directly ($25) or via One World Play Project’s buy-one-give-one model ($40) at the project’s website. 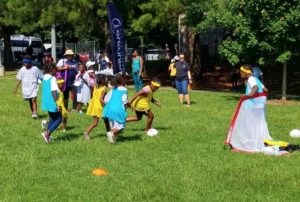