Haunted Atlanta: A look at the city’s ghostly history

Atlanta Ghosts giving Atlantans a good fright on a tour to Midtown's most haunted places. (Photo courtesy of Atlanta Ghosts)

Have you ever lived in an old apartment building where you heard someone call your name, but you were home alone? Or felt a shiver run down your spine and, sure enough, your cat is staring at something that you can’t see?

Whether you explain these situations away or know that you saw an apparition, we’ve all had experiences that make us wonder: Could ghosts be real? Let’s look at some places around Atlanta and the metro area that folks swear are haunted. 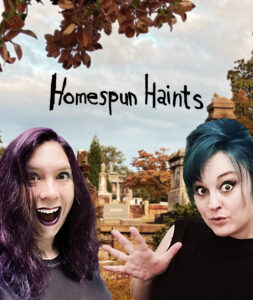 Atlantan Becky Kilimnik started a paranormal podcast, Homespun Haints, with her friend Diana Doty in 2019. She started off skeptical of the otherworldly, but after talking to so many people about their haunted encounters, she’s changed her tune.

Throughout her life, Kilimnik has experienced things that she can’t explain, which she’d previously written off or pushed from her memory.

“When I was five, I had an imaginary friend who was a grown man who seemed to have memory problems and would pace around my bed and rant and scream, and he had moldy hair,” she said. “He would tear things up in my room, and I would get in trouble for it. I kept trying to think that it was an imagination thing, but there were just too many things, especially the fact that there was physical evidence of him being there.”

As a paranormal extraordinaire, Kilimnik said that the best stories include two pieces: corroboration from other witnesses and history that explains the sighting.

Kilimnik has a story like that of her own. She has an art gallery in Marietta Square, an area where she said, “every single building in that square is haunted.”

Kilimnik says she and her family have seen locked doors open and close, which they’ve even caught on tape. She also described loud banging from the neighboring unit or the roof, but upon investigation, there was nothing unordinary happening.

One day, a paranormal investigator came into the gallery to buy a piece of art, and he described doing a reading on the building years before where he saw a little boy who had died in a fire in the 1920s. When they checked out the crawlspace, they found the charred brick walls that ended below the building’s floor.

She describes Atlanta and the metro area as “a very haunted place.”

One theory is that because the region sits in the foothills of the Appalachian Mountains, the granite and limestone, paired with running water from the Chattahoochee River, attract paranormal energy.

Another explanation is that Atlanta has such a deep history, with some eras filled with tragedy, and those spirits are bound to be tied here. This would explain sightings at Kennesaw Mountain, with a history of some unmarked Cherokee burial grounds and a battleground from the Civil War.

Kilimnik also says the Ellis Hotel in downtown Atlanta is a landmark for spirits. In 1946, 119 people died in a fire, and some reports describe the hotel’s smoke detector going off at the same time as the fire, along with faces screaming in the windows. 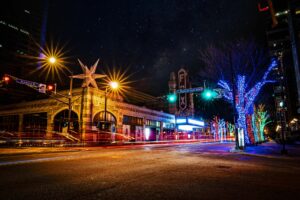 Many ghosts are said to wander the halls of the historic Fox Theatre. (Photo courtesy of Atlanta Ghosts)

Author Corinna Underwood has written two books about the hauntings of Atlanta, and during her research, spent a night investigating the Fox Theatre.

The city’s beloved theatre opened in 1929 and has more than one spirit floating through its velvet curtains. The theatre has a hospital room designed for performers when the Fox first opened, and the room is still filled with medical instruments from the late ‘20s. Some say that nurse Mary still wanders the grounds, a ghost named Roosevelt mans the boiler room and an organist whose ashes were scattered in the theatre remains today.

“Although I didn’t see any ghosts, while I was inside one of the dressing rooms, which is known for sightings of a ghostly woman wandering around in a shower gown, my digital camera suddenly wouldn’t work,” Underwood said. “When I stepped outside the room, it worked fine. When I stepped back inside, it would not work.

Much like Kilimnik, Underwood was interested in the paranormal world but maintained her skepticism until she spoke with people who had firsthand encounters.

“One thing that made a big impression on me is the way that people describe their experiences of hauntings. I have talked to hundreds of people, over the years, about their paranormal experiences,” she said. “[Whether or not they believed in ghosts,] one thing they all have in common is that they genuinely believe they have seen or felt a ghost and the experience has made a big impression on them, for some, it has changed their lives.”

Lainie Pahos is a tour guide for Atlanta Ghosts, where she takes folks to haunted spots around Midtown while telling the story of the site’s history and giving the guests a good scare.

Once, when stopping at the Peachtree Healthcare Center, Pahos’ group saw a jump on their EMF detectors, which measure electromagnetic fields.

“That’s a creepy doctor who used to experiment on his patients that haunts that place,” she said. “So I don’t really love that we got a spike at that one.”

But overall, Pahos deems Oakland Cemetery as the most haunted place in Atlanta.

“A lot of people have said that they’ve seen Civil War soldier ghosts because there’s like [7,500] Confederate soldiers there, and a lot of them are in unmarked graves,” she said. “The creepiest story that I’ve heard about the Oakland Cemetery is that this guy was walking through, and he heard Civil War soldiers doing their roll call and the last name they said was his name.”

For anyone who wants to see something that they can’t quite explain, Kilimnik has a method for you.

Have you had a ghost encounter? Or you’ve been to one of Atlanta’s most haunted sites and felt a shiver up your spine? Comment below about your experiences with the paranormal.