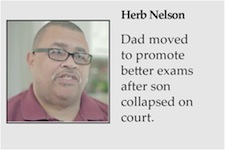 Three weeks ago, Herb Nelson sat in the bleachers as he watched his 12-year-old son playing on his all-star basketball team when he had a Moment that changed everything – his son signaled to his coach that he needed to be taken out of the game. A minute later, his son slumped to the floor and didn’t get up.

“He took a shot, kind of looked like he was tired, and asked to come out of the ball game,” Herb said. “About a minute later, he collapsed on the sideline.”

Herb and other family members rushed over to Jeremy Nelson and worry struck, as it would strike any parent. They watched as a doctor – also in the stands that night – check Jeremy’s vital signs. A short time later, the emergency vehicles arrived and the responders loaded Jeremy in the ambulance to take him to Gwinnett Medical Center.

The father, a commercial landcape company owner, described hearing the flat lines as the medical team used the heart defibulator to attempt to bring life back into to his young boy. Then, at 10:20 p.m., the doctor told Herb what he had feared the most – there was nothing they could do to save his young son’s life.

In the hospital waiting room, the Nelson family sat with dozens of members of the Buford community, including Buford public school officials – holding each other tight and praying to avoid the type of news that Herb was reluctant to deliver. He would have to deliver this news to his wife, his 17-year-old daughter, Christina, Jeremy’s twin sister, Jessica, and the community – Jeremy’s teammates, his coaches, the school principal, superintendent and neighbors and friends.

Three weeks ago, Atlanta media covered the unexpected tragedy of this middle school athlete whose personality and spirit were described as radiating toward others. Jeremy was a seventh grader at Buford Middle School and by anyone’s standards, a healthy and wonderfully spiritual kid.

No one could have expected his untimely death that Saturday night, January 5, 2013, as the 6-foot tall seventh grader played one of his many Gwinnett Basketball League all-star games at Suwanee Sports Academy.

At that Moment, he realized what he had to do – he had to be strong for his wife and his two daughters and the larger community.

“I wanted to be strong because it’s easy to have faith when everything is going along 60 miles per hour, but suddenly tragedy strikes and how are you going to react?” Herb said.

After hearing the news about Jeremy, the Buford community quickly organized a middle-of-the-night chapel service for family and friends to honor Jeremy. While deeply saddened, Herb described the scene as another opportunity for him to set an example based on his deeply rooted faith. As more than 70 people gathered at 1 a.m. in that Buford chapel, Herb decided to get up and speak to the congregation.

“Even though Jeremy is not here, we must go on,” he told the crowd.

He shared with them a saying his mother was fond of, “the Bible does not lie.” He realized showing his faith would be the best reflection of God he could offer.

“A lot of people told me how strong I was and I didn’t see it that way,” he said. “That was them seeing God working in me – I honestly didn’t know what I was doing, I was just going through, like I had my entire life.”

Much of Herb’s peace from his son’s death comes from knowing his son’s fate.

The Nelson family didn’t just share a love of sports together; they shared an unwavering sense of faith.

Herb described how Jeremy often asked the question, “What would Jesus do?” when faced with a dilemma and was always the first to ask the family to bow their heads and pray before meals at the table or even in the car before it moved the family on a road trip.

“God put him here for 12 years and I have to believe that his work was done at that point,” Herb said.

But while Herb has an inspiring sense of peace after his son’s death, he told us that it doesn’t always mean life is easy for him.

Simple and everyday tasks, such as taking out the garbage, have reminded Herb of his son and the fact that he will never be able to see his son on ordinary days such as that anymore. The impact of the tragedy – coupled with his motivation to fulfill a purpose – have inspired Herb and his family to raise awareness about the undetected medical conditions that can suddenly afflict children who are heavily involved in sports such as Jeremy was.

He said he feels like God took his son for a reason and while he isn’t exactly sure what that is, he knows what he can do now.

“For me now, I want to try to bring awareness for these kids that are playing ball – to make sure that if there’s something that can be done, it will be done,” he said.

Herb and his family are in the process of organizing health care fairs at sports tournaments for very active children to be able to receive attention outside of their yearly physicals. He wants to sponsor EKG tests for young athletes that might detect conditions such as Jeremy’s. The final coroner’s report is pending, so the exact reason for Jeremy’s death has not been determined, though news reporters first reported that pulmonary edema was suspected.

“That doesn’t guarantee that it won’t happen to another family, but if we can help one family, we have done our job,” he said.

While there are undoubtedly more tough days ahead for the Nelson family, for Herb, the Moment Jeremy fell to the ground wasn’t just about Jeremy. It was a Moment that tested his faith and a Moment that would serve a larger purpose. 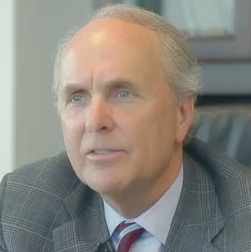 Next week in Moments: Ken Thrasher

Next week in Moments: Ken Thrasher, on the sermon that caused him to leave big firm and start his own accounting firm.