A new normal — combining green space in Atlanta with the blue-lighting of streams and storm water — is taking hold in our city.

The magical combo holds the potential of adding dozens if not hundreds of acres of parks and green space to our “under-parked” city while helping us address our flooding and storm water overflow problems.

And the development community is taking notice.

At the Urban Land Institute Atlanta Awards of Excellence on Sept. 12, the project that received the top award was the Historic Fourth Ward Park (click to see video). It was the first “Project of the Year” award to be given by ULI-Atlanta since 2009.

The development of the Historic Fourth Ward Park turned a serious flooding problem into a beautiful amenity next to the Atlanta BeltLine. The area had been made up of acres and acres of surface parking lots that flooding into the basement of the old City Hall East, making that building almost impossible to redevelop.

Ordinarily the city and public works engineers would have tried to design a really big tunnel to handle all the storm water flooding into the area that historically had been fed by natural springs. 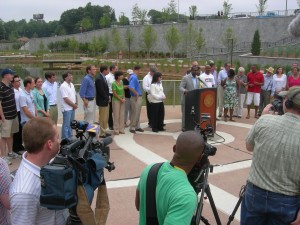 And then a group of environmental activists and neighborhood architects and planners had a better idea. Why not turn those parking lots into a two-acre lake that could absorb a 100-year flood and create a beautiful park around it.

That “green and blue” solution ended up saving the city $15 million compared to building a traditional storm water tunnel. And the presence of the Historic Fourth Ward Park and the Atlanta BeltLine has sparked a development boom of apartments and residences.

It also made the sale of City Hall East to Jamestown — which is developing Ponce City Market next door — possible.

So can that “green and blue” formula be replicated in other parts of the city?

The answer is yes.

Paul Morris, the new CEO of the Atlanta BeltLine Inc., speaking at the Sustainable Atlanta Roundtable on the morning of Sept. 13, gave hope that a similar formula was underway on the westside. 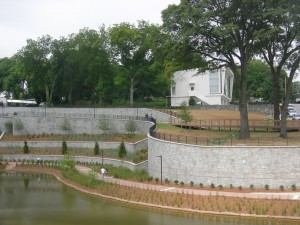 First, in reference to Historic Fourth Ward Park, Morris said the BeltLine could not have done it on its own. It took foundations, environmental groups, the community, the parks department and the public works department to create “an extraordinary park and the largest storm water management facility in the city.”

The secret, Morris said, is for every one to step out of their individual boxes.

“On the westside, all the right parties and all the right players are involved,” Morris said. That includes the Trust for Public Land, the City of Atlanta (and the various departments such as Watershed Management and the Parks Department), the State of Georgia, the U.S. Environmental Agency, the U.S. Corps of Engineers as well as private organizations such as Park Pride and foundations.

“Entire natural resources will be restored,” Morris said, referring to the area around the Bellwood Quarry. Eventually that could become one of the city’s largest parks with 300 acres. 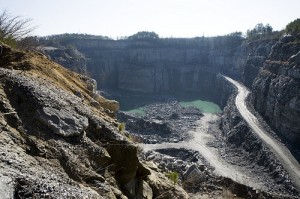 The Bellwood Quarry — planned to be one of the city’s largest parks (Special – Atlanta BeltLine Inc.)

“It will be transformative,” Morris said. “It’s emblematic of what the BeltLine is all about — taking something that is broken and recreating it, restoring it and making it into something that is beautiful. And at the same time changing the way we do business. It is so ambitious and so exciting.”

This new normal dovetails with Park Pride’s ground-breaking (literally) study that it did a couple of years ago: “The Proctor Creek North Avenue Watershed Basin: A Green Infrastructure Vision.”

The study looked at the entire watershed of 1,652 acres, including the Georgia World Congress Center, the Georgia Dome, the Gulch and the neighborhoods of Vine City, English Avenue and the Atlanta University Center area  — the entire area west of the new Atlanta stadium. 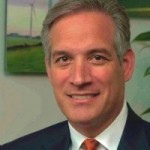 Over the years, the area has experienced extreme flooding, particularly in 2002 when hundreds of homes were destroyed or damaged.

The Park Pride study, working with a coalition of community-based organizations and leaders, came up with a set of recommendations that offered green solutions to the area’s storm water challenges.

Atlanta once again can seize the opportunity of replicating the success it has had with the Historic Fourth Ward Park.

We can paint with a whole new palette of colors— the “green and blue” landscapes — returning Atlanta’s land, parks, lakes and streams to their natural inherent beauty.