The historic former gas station at 600 Memorial Drive, bedecked with a "Black Lives Matter" mural, as it appeared on May 28. Photo: John Ruch

Nearly 70 years after it began serving drivers headed to Stone Mountain, a historic, long-shuttered gas station in Cabbagetown is facing city-ordered demolition. That’s welcome news for residents unhappy with an eyesore condition that includes a tree growing out of the missing roof. But for preservationists, the station’s fate is fueling concerns about why the historic property got overlooked in city protections and how Code Enforcement crackdowns can promote the loss of significant relics of Atlanta’s past. 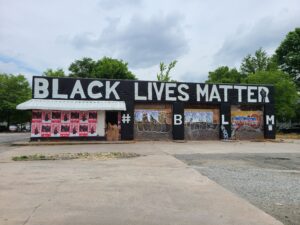 The historic former gas station at 600 Memorial Drive, bedecked with a “Black Lives Matter” mural, as it appeared on May 28. Photo: John Ruch

“I would suggest that this situation lays bare several systemic issues with the preservation of the built environment in Atlanta,” says Charles Lawrence, board chair of the preservation group Historic Atlanta, about the gas station at Memorial Drive and Boulevard next to Oakland Cemetery. He said those include an inability to automatically consider preservation of derelict historic buildings and the process gaps that allowed the gas station to appear in Cabbagetown’s listing on the National Register of Historic Places yet not in its city Landmark District that offers protections from demolition.

District 5 City Councilmember Natalyn Archibong, who has transmitted neighborhood concerns about the gas station to Code Enforcement for years, agrees that the city should consider other ways to handle historic buildings that become derelict.

“I think that becomes a question that needs to be grappled with,” said Archibong, who is now running for the Atlanta City Council presidency. “Even though we have our process and we’re following the law, is there something more and better that could be done [in similar situations]?”

Can a gas station be historic?

Dating to 1952, according to Fulton County property records, and numbered as 600 Memorial Drive, the gas station is a typical rectangular building on an asphalt lot with the pumps long gone. Today, its facade is covered in a signature of the current historic moment: a “Black Lives Matter” mural.

But can a 1950s gas station be historic itself? For sure, says Jacob Elsas, CEO of Cabbagetown’s Patch Works Art and History Center and great-great-grandson of the man who built the neighborhood-creating mill that is now the Fulton Cotton Mill Lofts. Elsas says the gas station is a legacy of the automotive age and specifically of the transformation of the former East Fair Street into “Memorial Drive,” serving tourists on their way to the then under-construction Confederate memorial carved onto Stone Mountain. “This was the street that would take white Atlantans back and forth to celebrate their Confederate roots or whatever,” he said in an interview about that disturbing but significant past.

The former gas station — then a tire store — as it appeared in a 2006 update to the Cabbagetown listing on the National Register of Historic Places. In the rear is the neighboring Oakland Cemetery. Credit: U.S. National Park Service/National Archives

Elsas elaborated in an email to the city’s historic preservation office, where he acknowledged the building’s poor condition but said its exterior was sound: “In my opinion, demolishing this building would prove to be a terrible loss to both the city and Georgia, as the gas station is one of the last remnants of a bygone era that was significant in Atlanta’s turn-of-the-century period of growth and the emerging importance of the automobile.”

However, the Department of City Planning says there’s nothing it can do, as the building has no landmark status or other protections, unlike many other structures in Cabbagetown. The neighborhood made the National Register of Historic Places in 1976, but the gas station was not listed as a contributing building and would not have qualified because the cut-off year for “historic” status was 1925. In the 1990s, Elsas says, local historians drafted an update to the listing that expanded the “historic” period to the 1950s and included the gas station, which was finally officially added in 2006. At that time, the structure was still in use as a tire store.

Regardless, the National Register does not provide any legal protection from demolition. The city’s 40-year-old Cabbagetown Landmark District code does offer such protection, but the gas station has never been listed there — despite the National Register citation. “Non-contributing structures do not require special approval to be demolished in either a Landmark or Historic District,” said Doug Young, the city’s top historic preservation official, in a May 24 email to concerned advocates. Among the available protections in the code for buildings that are listed is intervention against “demolition by neglect,” where a building falls into such disrepair it must come down. 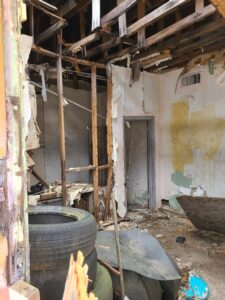 The virtually gutted interior of the former gas station as it appeared May 28 through a doorway that was boarded up but had been partly torn open. Photo: John Ruch

Meanwhile, the gas station has been vacant for years and now has a virtually gutted interior. Archibong said talk of such reuses as a sports bar fell through over five years ago. More recently, she said, the property has been a “homeless encampment,” a parking lot for a nearby restaurant, and a construction staging area for the Georgia Department of Transportation.

It’s also been a source of 16 complaints since 2009, according to the Atlanta Police Department, of which Code Enforcement is a unit. Those include squatters in the building, graffiti, trash and a “deteriorated and abandoned” condition. In December, a city administrative board ordered the property demolished, and the owner has filed to do so twice — once in March and again on May 25. “The order allows the City to demolish should the owner fail to demolish or renovate,” said an APD spokesperson.

The owner, according to county property records, is Christine M. Sawyer of Atlanta, who could not be reached for comment. According to Elsas, Sawyer’s children are working on the demolition and planning for the site, which he says he has discussed with them. He said the post-demolition future of the property is unclear but that it might be a parking lot or deck. No building permits for the site had been filed with the City as of late May. 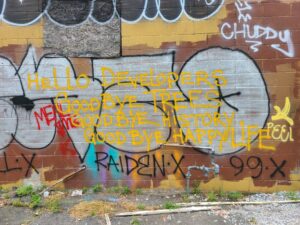 Graffiti on the rear of the former gas station comments on the effect of the current development boom on Atlanta’s trees and history. Photo: John Ruch

Lawrence at Historic Atlanta says the gas station saga shows the weakness of City tactics in having the situation fall to Code Enforcement, which “only has one trick: levying fines until the owner fixes or demolishes a property.” He noted that many other cities have a system for automatically reviewing the demolition of any property aged 50 years or older for the feasibility of preservation, among other intervention mechanisms. Demolition should never be approved without a permit for new construction as well, he said. And, Lawrence said, historic surveys of the sort that might have spotted the gas station for the Landmark District are chronically underfunded and thus often superficial.

“Ultimately, however, for 600 Memorial, there is not a lot left the community advocates and neighbors can do,” said Lawrence. “The property was left out of the historic district, it was left in a derelict state for many years, and there are few mechanisms to guide the future of this property in any meaningful way.”

Meanwhile, some of that graffiti on the building that drew Code Enforcement attention laments the loss of Atlanta’s past to development. It reads: “Hello developers. Goodbye trees. Goodbye history. Goodbye happy life.”

Views on Cabbagetown by Kelly Jordan