The main gate of Oakland Cemetery faces Downtown Atlanta and is located at the eastern terminus of Martin Luther King, Jr. Drive.(Photo by Kelly Jordan) 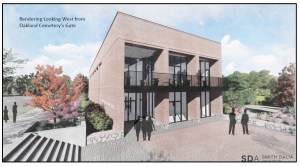 The latest grant will go towards building a 10,000-square-foot visitor’s center just outside the front gate of the cemetery. The city also acquired the 2-acre asphalt parking lot where the visitor’s center will be built. The Historic Oakland Foundation will lease the space, which includes additional park land, from the city.

“We are almost at the finish line,” said Richard Harker, executive director of the Historic Oakland Foundation.

To date, the Foundation has raised a total of $12.8 million for the campaign, which included the East Hill restoration project and the restoration of the bell tower, which was dedicated last month.

“When we finish that project in early 2024, we will have restored 20 of the 48 acres of Oakland Cemetery,” Harker said. “We have done eight acres in the last four years.” 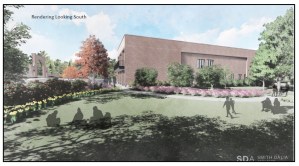 Rendering shows the expanded park space west of the visitor’s center with the entrance to the cemetery in the background (Special: Historic Oakland Foundation)

The Historic Oakland Foundation began in 1976 to help care for the city’s oldest public park. In the late 1800s, it was common for cemeteries to serve as public parks so people could spend time with their departed loved ones in a place surrounded by trees and nature.

Harker described the completion of the campaign as a historic moment for the cemetery. “Oakland is one of the oldest places in our city, and it was not established with perpetual care,” Harker said. “What we are doing now is to try to stave off the effects of nature and time and make up for 100-plus years of deferred maintenance.”

The campaign has had more than 1,000 donors, a testament to the public support for the cemetery, but the city’s investment has been instrumental. In addition to Invest Atlanta’s most recent $1.5 million grant from the Eastside Tax Allocation District, the city also provided another $1.5 million grant. Added to the land acquisition, the city has provided a total of $4.7 million towards the campaign. 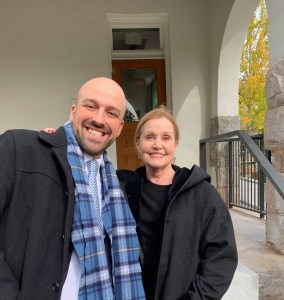 Richard Harker, executive director of the Historic Oakland Foundation, with Mary Ellen Imlay of the Imlay Foundation at the Nov. 16 ribbon-cutting of the Bell Tower (Photo by Kelly Jordan)

“The city investment has driven the philanthropic investment,” Harker said.

The major donors to the campaign included a $1.5 million grant in 2020 from the Lettie Pate Evans Foundation, part of the Robert W. Woodruff family of foundations, which was the largest ever philanthropic gift the Historic Oakland Foundation has received.

The Imlay Foundation made a $900,000 grant towards the restoration of the Bell Tower. And the Coca-Cola Foundation provided a $250,000 grant to help create a water retention system to capture stormwater around the new visitor’s center. The project also will include 42 parking spaces.

Harker said construction is expected to begin by the middle of next year, and the new visitor’s center should be completed by the end of 2024.

Given the volatility of construction prices, Harker said it is good the campaign raised $300,000 more than its goal. That gives the project a buffer in case there’s an escalation in construction costs. 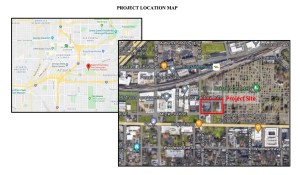 During the Dec. 16 Invest Atlanta meeting, Harker was asked about the design of the new visitor’s center. “The design was one we really wrestled with,” Harker responded. “We wanted it to fit into the neighborhood. The building is fully intended to be a neighborhood asset.”

In addition to the campaign, the Historic Oakland Foundation also is receiving $2.4 million from the city’s infrastructure bonds to restore the roads throughout the property.

Harker, who has been executive director of the foundation for two years and co-executive director for five-and-a-half years before that, spoke of the significance of restoring Oakland Cemetery, which includes the graves of some of Atlanta’s most notable citizens.

“In a city that does not have the greatest track record of historic preservation,” Harker said, “what better way for Atlantans to understand how we got to this point than by preserving and learning about our past and to chart a more just and equitable future?”