Historic Roswell farmhouse on sale for $125K and preservation agreement

The front facade of the Hembree Farmhouse. (Photo by Georgia Trust for Historic Preservation.)

If you’re a history buff in the market for a fixer-upper, $125,000 and a preservation agreement could get you one of the oldest surviving houses in Fulton County.

The Hembree Farmhouse in Roswell, dating to around 1835, is on offer from the Georgia Trust for Historic Preservation through a program that offers endangered historic buildings to buyers willing to rehabilitate them and preserve them permanently.

“The Hembree house contains some highly significant interior architectural features, which proves it is one of the oldest structures in the land after removal of the Cherokee Nation, which opened northwest Georgia to white settlement,” said Mark C. McDonald, the Georgia Trust’s president and CEO, in a press release.

According to the Georgia Trust and the Roswell Historical Society (RHS), one Amariah Hembree came to the Roswell area from South Carolina in the early 1830s to farm the lands after the government’s forcible removal of the Native Americans. His son James built the farmhouse on what was then a 600-acre plot. Another son, Elihu, and his descendants lived on the property for eight generations. Elihu’s grave is on the property.

The property has other historic connections to the rest of the city, including the growing of cotton for the Roswell Manufacturing Company mills and serving as the site for the 1836 founding of the Lebanon Baptist Church, which continues today at a different location.

Today, the farmhouse and its outbuildings stand on the last intact acre of the old farm, virtually landlocked amid a sea of cul-de-sacs off Hembree Road near Hembree Grove Drive. The family moved the farmhouse about 500 feet back from the street in 2007 and donated the entire property to RHS in 2008. RHS has worked for years to preserve the property. 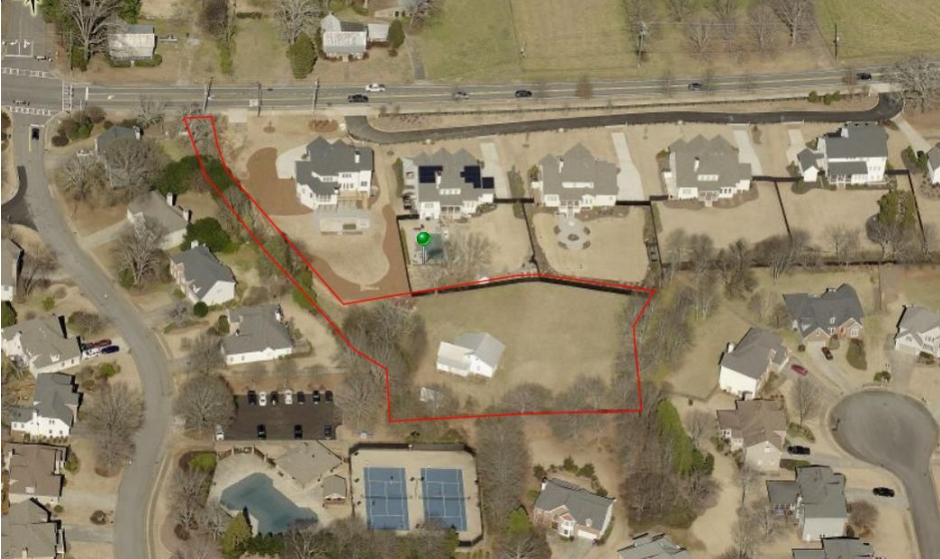 The Hembree farmhouse property, outlined in red, in an image provided by the Georgia Trust for Historic Preservation.

RHS is now aiming to sell the property by partnering with the Georgia Trust’s Revolving Fund program, which has saved more than 50 properties through similar sales and preservation agreements. The program acquires properties by purchase or donation and markets them for sale. When a buyer is selected, the Georgia Trust works with them to develop a rehabilitation and preservation plan and imposes an easement giving it permanent review powers over changes that would affect the historic character. Any money from the sale goes back into the fund for further acquisitions. For the buyer, the property can be sold like any other, but the preservation easement remains forever and is binding on any owner.

Besides the house and the one-acre site, the sale also includes two historic corn cribs and an outbuilding that served as a detached kitchen, a common practice at the time. The Georgia Trust says the house “retains much of its historic charm inside and out,” with many original features that include decorative fireplace mantles and porch trim.

However, the sales price is low for a reason. The house needs “extensive rehabilitation to allow for modern living, including all modern systems,” according to the Georgia Trust, and much of the historic elements need repair as well. The buyer will have to arrange for connections to the City’s water and sewer systems. Access to the property is via a long and narrow drive currently covered with gravel; a concrete or asphalt upgrade would be up to the buyer. There’s also Elihu Hembree’s grave, which cannot be disturbed.

The property is numbered for sale purposes as 775 Hembree Road, though that doesn’t show up clearly on such services as Google Maps or Fulton County property records. It sits roughly three miles northeast of Roswell’s historic downtown and just west of the Fulton County School System’s Hembree Springs Elementary and Elkins Pointe Middle schools.

For more about the farmhouse property and how to buy it, see the Georgia Trust’s website. See below for more Georgia Trust photos of the house and the site.

A door of the farmhouse.

A side view of the farmhouse.

An undated photo of the Hembree family.

A view of the farmhouse.

The front facade of the Hembree Farmhouse. (Photo by Georgia Trust for Historic Preservation.)

Detail of a doorknob.

Detail of a decorated mantel.

A mantel decorated with an arrow design.