After winding down a long, dark road nestled outside the city, the all-encompassing trees open up to a vast landscape filled with dazzling gold, blue, red and green lights.

Leave your real-world worries at the door and let Holiday Road transport you into a world reminiscent of holiday films. 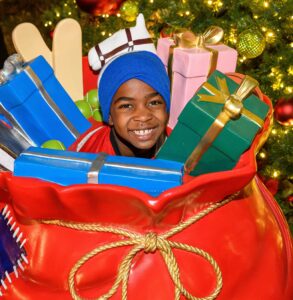 The entrance is flanked with larger-than-life nutcrackers, leading to a dazzling Christmas tree surrounded by candy canes and cutouts that turn your friends into elves or your kid into a jolly caroler.

Once stepping foot onto Holiday Road, visitors then dive into a miniature Winter Wonderland, featuring tiny shops with punny names like “Bank of Bah Humbug” and “Rudolph’s Runaway Flight School.”

Each individual holiday tableau is part of a larger cohesive scene; they’re all interwoven into an enormous explosion of lights, music and cheer.

Walking further down the half-mile trail, folks will step from Christmas to Hanukkah to Kwanzaa — with displays ranging from the Nativity Scene to oversized menorahs and dreidels and a basket of harvests and a kinara.

“We try to hit the most festive themes, like Mr. and Mrs. Claus and the North Pole,” Rossi said. “Lights are a big part of holiday tradition everywhere, so we wanted to incorporate that. We also wanted to celebrate all religions and creeds.”

While some of the 20-plus installations highlight end-of-year traditions, others are an ode to beloved pop-cultural mainstays like Frosty the Snowman and the Grinch.

“There’s some cozy and winter fun,” Rossi added. “With the Arctic Polar Land, we have our polar bears and penguins, and the Gingerbread Lane is a festive one.”

Atlanta’s holiday display is located at Fulton County’s HorseMansion at Bouckaert Farm, an equestrian haven by day, offering a secluded atmosphere and ample space to enjoy the show.

The HorseMansion itself is the backdrop for one of the last scenes of Holiday Road, a life-sized Mr. and Mrs. Claus surrounded by presents, hydrangeas and glistening snow as they overlook the twinkling scene. 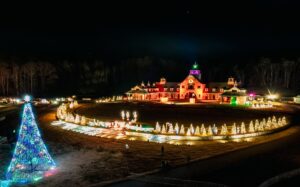 “We understood the grandeur of the HorseMansion and, in this iteration of it, it’s essentially Santa’s house,” Rossi said. “The North Pole in [Atlanta] is spectacular. The centerpiece where you see Mr. and Mrs. Claus with the nutcrackers and the Mansion as the backdrop is a real iconic and breathtaking scene.”

“We hope [visitors] feel enjoyment and excitement, and [we want] to help them further encapsulate the holiday cheer of this time of year,” he added.

Atlanta’s Holiday Road will run until Sunday, Jan. 2, so if you’re in the market for a little extra holiday cheer — and after nearly two years in a pandemic, aren’t we all? — head over to Bouckaert Farms to see the world of lights.