“Holocaust remembrance is not about the past; it is about the future,” said Rabbi Warren Goldstein, the Chief Rabbi of South Africa, during a virtual event honoring those whose lives were taken during the Holocaust.

On Sunday, Jan. 23, an Atlanta-based organization called Am Yisrael Chai hosted its annual Holocaust Remembrance event. This year, the guest of honor was Ella Blumenthal, who survived three concentration camps with her niece, Roma Rothstein. Blumenthal recently celebrated her 100th birthday at her home in Cape Town, South Africa.

Am Yisrael Chai is a local nonprofit that provides Holocaust education and genocide awareness in hopes of creating a more just world. The annual remembrance event preceded International Holocaust Remembrance Day on Jan. 27, marking the anniversary of the liberation of Auschwitz-Birkenau.

The event began with opening remarks from President and Founder Andrea Videlefsky and the Chief Rabbi of South Africa, followed by a candle-lighting ceremony to honor those who lost their lives. This year’s theme — Faith and Fortitude — was chosen to represent Blumenthal’s spirit and zest for life.

“Looking at Ella, and her life and her story, it really highlights those elements of her strong faith. She never ever gave up hope,” Videlefsky said. “She had a strong faith from her early childhood, and I think that’s sustained and helped her during the most difficult times of her life. And in terms of fortitude, her ability to face adversity, danger and to overcome those times… Her resilience really speaks to those words of faith and fortitude.” 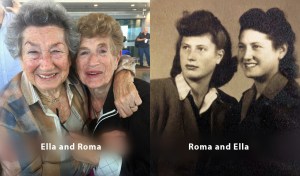 “So now, by spreading tolerance, learning and understanding, we survivors will be contributing to ensuring that these horrors do not happen again,” Ella Blumenthal wrote. (Photo courtesy of Am Yisrael Chai)

Blumenthal and her niece, only five years apart in age, were born in Warsaw, Poland, where they and their families were relegated to the Warsaw Ghetto in 1940. The two spent several grueling and terrifying years in the Majdanek, Auschwitz-Birkenau and Bergen-Belsen concentration camps.

In a written testimonial, Blumenthal describes being moved to Majdanek with Rothstein and her father. She recalls older prisoners being forced to the gas chambers — her father was one of them.

“We young girls had to go through a selection. I whispered to Roma that I was afraid that I wouldn’t pass the selection because of my bleeding back from the dog bites and the scraped knees from crawling on the gravel. Roma assured me she would follow me wherever I was sent,” Blumenthal wrote. “And it was with one wave of the whip — rechts, links [right, left] — that a human life was decided upon. Right to life, left to death. When it was my turn to pass the selection, I used all of my strength left in me and lifted my shoulders and head high, and I was sent to the right; to life. And so was Roma.”

During the live event, Blumenthal described the horrendous living conditions and the daily fear that she and other prisoners faced for years. She tearfully recalled one night in particular when she was certain that her life would be taken.

“We knew that we were going to die because it was the middle of the night, and we felt there wasn’t much time for us,” Blumenthal said. “We were pushed into a bathhouse, and when the door shut behind us, we knew that the poisonous gas would come down any minute.”

She continued: “I’m standing against a wall with Roma, and I was holding her hand, and I was whispering, ‘Don’t be afraid, it won’t hurt and I don’t think it will take long.’ As I finished, the heavy door opened, and the SS man marched in, and said, ‘Quiet, you’re not going to be gassed, you’re going to stay here, and tomorrow you’ll be sent to another camp.’ Some of the girls fell to his shiny boots and kissed it.”

She was only saved because SS officers had orders to execute 500 prisoners, and had gathered 700. She was among the fortunate 200.

In April of 1945, Blumenthal, her niece and the other prisoners were liberated from Bergen-Belsen by the British army. She and Rothstein moved to Israel after learning Rothstein’s father had survived, and that’s where Blumenthal met Isaac, a South African man who soon became her husband. The two were wed thirteen days after they met.

Blumenthal’s story is one of incredible resilience, strength and optimism amid one of the darkest times in our history.

“I decided that I would not think of my past and not let it be in the way of my future, for me and my family,” she said. “[I decided], I’m going to build a family and a life, and so I did.” 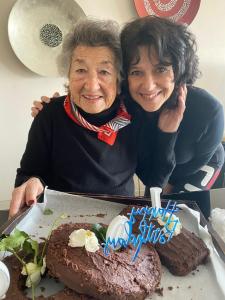 Blumenthal’s daughter, Evelyn, wrote in an email to SaportaReport that her mother is proud to help spread “the message of tolerance and understanding.”

She continued: “While it’s not always easy for her to recount her story, she feels honored to be given the opportunity to spread her message of tolerance and hope, and for this we are very appreciative. This video will forever be cherished by our family and will be a perpetual reminder to us and the world of my mother’s legacy – her courage, her zest for life and for ultimately portraying just what a remarkable woman she is.”

Blumenthal was able to share her story with over 900 people from all over the world during the virtual event. The ceremony is generally held in person but was moved online due to the pandemic. This transition was helpful, Videlefsky said, because they could stream the program internationally and include guests who wouldn’t have been otherwise available.

Videlefsky added that sharing stories of past atrocities is essential to barring future injustice.

“If we just think about aging Holocaust survivors, these were direct witnesses. And as they age, I think we can learn so much. As Elie Wiesel said, ‘To hear a witness is to be a witness,’” Videlefsky said. “If we share these stories and understand what took place and what led to these situations, it can help us develop a broader understanding of what we should be doing today to prevent these things from happening again.”

The program will be shared with local schools through a partnership with the Georgia Commission on the Holocaust, with 14 schools already signed up. The Am Yisrael Chai team has also put together a digital exhibit documenting Blumenthal and Rothstein’s journey during the Holocaust, along with firsthand accounts and photos of their experiences.

Blumenthal concluded by encouraging people to keep their eyes on the future and to care for one another.

“People must never lose hope,” she said. “People must share their views, they must talk to each other, and there will be peace. It’s a miracle, simply a miracle, that I’m talking to you. Now, I live a life of the living because faith was always with me since I was a little girl.”

To learn more about Blumenthal and Rothstein’s stories, click here to visit the virtual exhibit.