A home at last: Atlanta ‘Comfort Women’ statue is welcome in Brookhaven

The Atlanta Comfort Women have found a home – Brookhaven.

A statue of a young girl sitting in a chair originally was supposed to have been anchored at the Center for Civil and Human Rights. The memorial was an artistic depiction to shine the light on human sex trafficking.

But earlier this year, the Center reversed its decision to host the statue after getting pressure from business and international leaders.

So the Atlanta Comfort Women Memorial Task Force, which had already commissioned the statue, had to find a new location.

Memorial Statue that had been proposed for the Center for Civil and Human Rights (Special: Atlanta Comfort Women Memorial Task Force)

A unanimous vote by the Brookhaven City Council at its meeting on May 23 welcomed the “Young Girl’s Statue for Peace,” a memorial that honors the 200,000 girls and women – called the “comfort women” – who were sexually enslaved throughout Asia during World War II by the Japanese Imperial Army.

“The Comfort Women tragedy is one the largest known cases of human and sexual trafficking in the 20th century. International human rights tribunals, United Nations groups and rapporteurs have all affirmed the history of the Comfort Women and that their fundamental human rights were violated,” said John Park, a Brookhaven City Councilman, in a statement.

“I know I speak for the City Council, when I say the City of Brookhaven is deeply honored to be the home for the Young Girl’s Statue for Peace,” Park continued. “As we remember the history of these victims of human trafficking and enslavement, we bear witness to their suffering so that these atrocities never happen again.”

Park first championed the idea of welcoming the Comfort Women Memorial in Brookhaven and quickly Mayor John Ernst and each City Council member enthusiastically agreed on the importance of having such a remembrance on Brookhaven.

“By establishing this memorial, we are raising awareness of the ongoing problems of sexual and human trafficking taking place in metro Atlanta and the world today,” Ernst said. “The City of Brookhaven is proud to join the growing list of progressive cities around the world that have already installed memorials in recognition of Comfort Women and their suffering. Brookhaven is now the first city in the state of Georgia and the deep south to publicly commit to the Comfort Women memorial, and we encourage other cities to join us in a strong, public stand against human trafficking.” 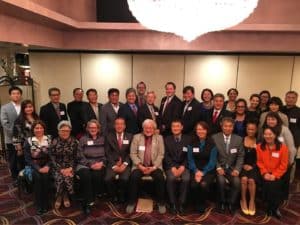 Tim Echols, a Georgia Public Service Commissioner who is the Statewide Advisor to the Atlanta Comfort Women Memorial Task Force, said Brookhaven has led the state in the fight against sex trafficking.

“The history of the comfort women will help raise awareness and remind our community how prolific trafficking has been throughout the world,” Echols said.

Brookhaven is a diverse community where about one-fourth of its residents are foreign born.

Brookhaven also was also the first city to join “We’re Not Buying It,” a national initiative to create a forum for all 50 states to collaborate and develop strategies to finally put an end to sex trafficking in the United States.

The specific site is still being determined, and it will be announced at a later date. The City plans to host an unveiling ceremony later this summer. The Task Force will also organize an educational event on the history of the Comfort Women and the connections with other local and international cases of sex trafficking.

“We are grateful for the courage, passion and commitment of the city officials of Brookhaven,” said Baik Kyu Kim, chairman of the Atlanta Comfort Women Memorial Task Force. “It is our hope that this beautiful statue will bring much healing, peace and hope.”

The Brookhaven statue will join a total of 54 municipalities around the world that honors the “comfort women and girls” through the installation of a permanent memorial.