Purpose Built Communities, a nonprofit group founded four years ago by Atlanta businessman Tom Cousins and billionaire investor Warren Buffett, and now led by former Atlanta Mayor Shirley Franklin, held its second annual Network Member Conference in Indianapolis in September where supporters could see firsthand one of its neighborhoods under construction. Atlanta Business Chronicle contributing writer Maria Saporta was there. Here is the first of two stories reporting on the group’s work. The second will appear next week.

“I have seen a lot of attempts to do what you did. Most failed. You and your wife are really to be congratulated. If there are any projects you are working on at East Lake or elsewhere where you could use a little financial help, just let me know. I like to back up talent.”

The writer was none other than Warren Buffett, one of the most successful and wealthiest businessmen in the world.

Buffett had just seen a CNBC feature story about how Cousins had revitalized one of the most dangerous communities in Atlanta — East Lake Meadows — into a thriving, safe mixed-income neighborhood with a top-performing charter school, a state-of-the-art YMCA and a public golf course.

For years, Cousins had wanted to spread the success of East Lake to other communities around the country.

So when Cousins received Buffett’s letter, the idea of Purpose Built Communities was realized.

Purpose Built Communities is a nonprofit entity that already is working on redevelopment projects in a half-dozen cities around the country. It is completely underwritten by three investors — Cousins, Buffett and former hedge fund executive Julian Robertson. Former Atlanta Mayor Shirley Franklin serves as the organization’s chair and CEO. 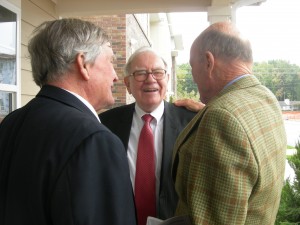 In late September, Purpose Built held its second annual Network Member Conference in Indianapolis to see firsthand one of the communities under construction.

The three investors participated at the conference, which drew about 200 people from across the country.

Atlanta Business Chronicle had an opportunity to interview Buffett as well as attend a press conference and luncheon. During the day, Buffett shared his views of Purpose Built Communities, philanthropy, business, and several Atlantans, including Cousins, Ted Turner and Sam Nunn.

“The three of us together are more together than the three of us are separately, but Tom is the leader by far,” Buffett said. “You want to back good ideas with terrific people. There’s nobody like Tom Cousins. We should be thanking him. I consider myself lucky.”

Buffett said he has been particularly gratified by the work that Purpose Built Communities has undertaken in some of the toughest neighborhoods in the country.

“This is the easiest because you do see the results pretty darn fast,” Buffett said. “You can look at faces and see the kids whose lives are being changed. That’s very satisfying.” 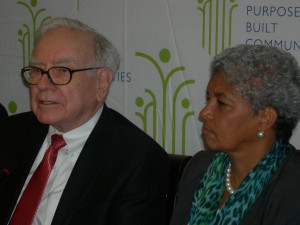 Buffett has gained recent notoriety for supporting higher taxes for the wealthiest individuals in the country — a position that is now being called the “Buffett rule” — and a position that has made Buffett unpopular in some circles. (The only reference Buffett made to the “Buffett rule” was when he was riding on an elevator, jokingly saying: “Who would want a tax named after him?”)

His comments, however, offered a window into how Buffett views his own wealth and the needs of those less fortunate than him and his friends.

“We need to support everything that makes sense for the betterment of humanity,” Buffett said during an informal interview on the VIP bus touring the Indianapolis project. “Einstein said: ‘Remember your humanity and forget the rest.’ In the end, I’ve got a lot of the money that is of no use to me and can be good for the rest of the world.”

Asked how much he would be willing to invest in Purpose Built Communities, Buffett said: “We won’t run out of money. You don’t even want to put a limit on it.” 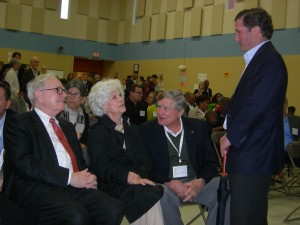 Later, during his luncheon conversation with former Mayor Franklin, Buffett expounded his thoughts. “Success will cause replication. It will gain momentum,” Buffet said.

If they are successful, Buffett added, they won’t have any problem getting money. “It’s a lot easier to write a check,” Buffett said compared to having to do the work to rebuild communities.

“It’s about changing lives,” Buffett said. “It’s about taking people who did not have the kind of luck I had in my life and getting them to the starting line. They’ve gotten some short straws.”

Buffett was asked about the difference between business and philanthropy.
“In business I look for easy things to do — the fat pitches,” Buffett said. “In philanthropy, you are working on very difficult issues. You are not looking for easy problems. You look for good projects with good people. It is a tougher game.” 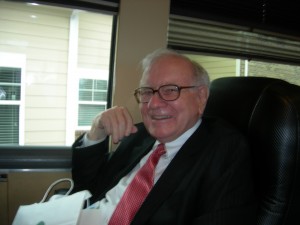 Asked about Turner, Buffett said: “Ted comes in technicolor and stereophonic sound. Tom Cousins is just the opposite.” Despite their differences, Turner and Cousins have been close friends for decades.

Buffett has several ties to Atlanta. He was a longtime director on The Coca-Cola Co.’s board (and a major investor). Although he is no longer a Coca-Cola director, Buffett has remained close to several directors, including retired Coca-Cola President Don Keough and retired SunTrust Banks Inc. CEO Jimmy Williams.

“In many ways, I miss being on the Coca-Cola board,” Buffett said. “I miss it, but I don’t want to go back on the board.”

In Buffett’s mind, improving public education is tougher than having breakthroughs in medicine.

“If I wanted to be sure I would get results in the next 10 years, I would work in medicine,” Buffett said. “Everybody knows what needs to be done. We spend four times per-capita [than other developed countries], but we are not getting results commensurate with that. The solution? Spending longer hours in school, getting rid of poor performing teachers and rewarding the best performers.”

One of the funniest lines Buffett shared was when he was talking about public education. “A good public school system is like virginity. It can be preserved, but it can’t be restored,” he said.

Asked about the economy, Buffett said: “Unemployment is going to get better. Two or three years from now, it will not be like it is now. But I can’t tell you about two or three months from now.” 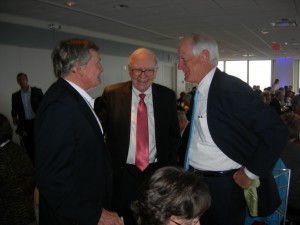 Buffett also talked about his auspicious birth — on Aug. 30, 1930. “After I was born, the market went straight to hell,” Buffett said.

Then Buffett talked about how he makes investment decisions. He said he reads quite a bit, but he doesn’t take into account what other investors are doing.

“I have never paid attention to anyone else,” Buffett said. “I like to be in a room by myself and think.”

Buffett was asked if he had become more philanthropic as he’s gotten older.

“When I was in my 20s, I told my wife we’re going to be rich. She didn’t believe me,” Buffett said, adding that he told his wife that she would be in charge of charitable donations. “She was pretty good at giving it out. But she died seven years ago. And I had to make the decision of how to implement my philanthropy. I came up with the idea of finding the best.”

So instead of creating his own foundation, he has selected five foundations for his philanthropic investments.

“I hear about all kinds of philanthropic opportunities,” Buffett said about his investment in Purpose Built Communities. “The scarce factor is talent. When you get the right people doing things, you just back them to the hilt.”

When talking about Purpose Built as an investment, Buffett said he had great confidence in the nonprofit’s success. “We are going to have a terrific average in Purpose Built Communities because it’s working.” 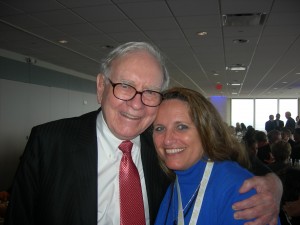 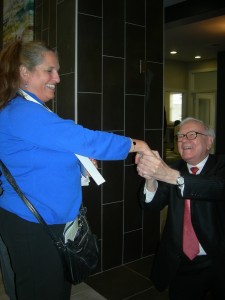 Warren Buffett shows his playful side, getting down on his knees (Photo by Luz Borrero)

Personal note: While in Indianapolis, Warren Buffett’s charm and humility was readily apparent. He patiently posed with numerous people who wanted to have their pictures taken with them. When Luz Borrero of Purpose Built Communities asked Maria Saporta if she wanted to have her picture taken with Buffett, Buffett showed his playful side, insisting that they get their picture taken together. “I’ll do even better,” Buffett said with a twinkle in his eye. “I’ll get down on my knees.”

Previous Article
No matter how many statistics, ‘Moneyball’ doesn’t add up
Next Article
Thanks to Womenetics, Atlanta becoming a growing center for women’s issues