By Maria Saporta
As published in the Atlanta Business Chronicle on August 7, 2015

When Hank Huckaby was asked in 2011 to cut short his four-month-long tenure as a state representative to join Gov. Nathan Deal’s administration as the chancellor of the University System of Georgia, he asked the governor one question.

That exchange explains how Huckaby has become a statesman-like, change-agent within Georgia’s university system.

The biggest change? The consolidation of several state universities and colleges. During the four years that Huckaby has been chancellor, the number of public colleges and universities in Georgia has dropped from 35 to 30.

Plus when the proposed consolidation of Georgia State University and Georgia Perimeter College is approved by the Southern Association of Colleges and Schools and the Board of Regents (possibly in January 2016), that number will be 29.

That consolidation will place Georgia State among the 10 largest public universities in the country.

But Huckaby is not done making changes.

When introducing Huckaby as speaker at the Rotary Club of Atlanta on Aug. 3, Regents board member Philip Wilheit said: “Most likely you’ll see further consolidations discussed.” 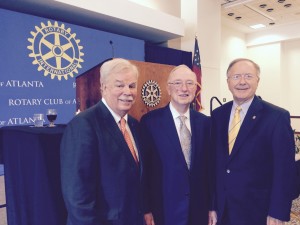 In a later interview, Huckaby elaborated: “There are none under consideration now, but the concept is not off the table.”

By the way, Huckaby’s first consolidation was that of Gainesville State College — right in the governor’s home town — and North Georgia College & State University. When those institutions became the University of North Georgia, Huckaby said Deal did not back down from his commitment, telling him: “If I can’t support it in my own backyard, how can I expect others to do it?”

Huckaby and the University System are gaining national attention for consolidating institutions.

A recent article in the magazine of the National Association of College and University Business Officers focused on the chancellor’s consolidation initiative.

“We want to keep moving,” Huckaby said. “We are at the cutting edge. Nobody else is doing consolidation like we are.”

And that’s just the beginning. At the Board of Regents’ meeting on Aug. 12, Huckaby will be presenting two new initiatives.

The first will be to continue building a more direct link between the university system and the state’s business community by focusing on particular industries.

The first example has been the proposal to create the Georgia Film Academy — a way to train Georgians for professions in the film and video industry (see related story, Page 19A).

The second proposal will be introduced to the Regents at its next meeting — and this time the industry will be cyber-security. Georgia already is a national leader in that space, and Huckaby wants to make sure there is a skilled and prepared workforce in the state to meet that industry’s need.

Paralleling that initiative has been the building of a closer collaboration between the University System of Georgia with state’s technical colleges.

Huckaby and his team also will introduce a second initiative to the Regents on Aug. 12 — providing a needs-based financial assistance program for students who have difficulty paying for college.

Georgia currently is 47th — actually tied in last place with three other states — for providing adequate needs-based, financial assistance for its students, Huckaby said. One of his top goals will be to try to improve Georgia’s track record.

“It’s a complicated issue,” Huckaby said. “Many of our students are very low-income, and many of them are first generation college students. So it’s a challenge for them to get the financial aid to go to college. And we need them to go to college.”

Huckaby added that when he presents a report to the Regents, he will “just be documenting the need. I’m not advocating for a source of funding.”

Although he does not have a position on casino or pari-mutuel betting, Huckaby said that if it were ever to become legal in Georgia, he would hope that some of the funding would go towards a needs-based, financial aid program for university students.

Huckaby can best be described as a true professional in state government. In his introduction, Wilheit said Huckaby had worked for every governor since Jimmy Carter in the early 1970s.

“I came into the Office of Planning and Budget when Carter was governor and for the first year of (Gov. George) Busbee,” Huckaby explained before slightly correcting what Wilheit had said. “I really wasn’t that involved during Roy Barnes’ administration.”

During his career, Huckaby has been a teacher and administrator in the University System. In addition to working at OPB, Huckaby also served as the second commissioner of the Georgia Department of Community Affairs and as executive director of the Georgia Residential Finance Authority.

He also worked as the senior vice president for finance and administration at The University of Georgia until 2006.

When Deal asked him to leave the legislature to become chancellor, Huckaby made a five-year commitment.

“This is my fifth year,” Huckaby said. “After that, we agreed that we’ll take it year-by-year. I’m getting old. But there’s a lot yet to be accomplished.”

Among some of Huckaby’s other initiatives have included having a more efficiently managed university system with better control on the financing — reducing the debt at the institutions, reforming the retiree health plan and getting a better handle on the space utilization at the various institutions.

Probably the most important issue at the universities is making sure that students, faculty and staff are safe and feel safe. The Regents had established a campus security task force, co-chaired by Georgia Tech President Bud Peterson and Steve Dorman, president of Georgia College & State University in Milledgeville. They submitted their report in May.

“Now we’re in the process of implementing those recommendations,” Huckaby said.

Although Georgia is widely recognized for having strong institutions for higher learning, it ranks poorly when it comes to K through 12 education.

Because the university system actually provides the teachers who are in Georgia’s K-12 classrooms, Huckaby said the Regents can play a role in improving those results. “We are really trying to make a difference,” he said.

The challenges facing colleges and universities today are many — from offering online courses to making sure the University System has a healthy balance of students from Georgia, the rest of the country and internationally.

For example, Georgia Tech’s student body is 60 percent from Georgia, 30 percent from elsewhere in the United States and 10 percent international.

“Georgia Tech is a tremendous magnet, not just for the system but for the state of Georgia,” Huckaby said when talking about its ties to economic development and research. “It is really a prized jewel. [Student enrollment] could potentially be an issue with some residents because a lot can not get into Georgia Tech. There were 27,000 applications for 2,700 slots.”

But one doesn’t want to close off admission to Georgia Tech to students from outside the state.

“Part of Georgia Tech’s value to the state is its national and international reputation,” Huckaby said. “The balance is hard to achieve.”

When looking over his career, Huckaby said that being chancellor has been “a bigger job than any I’ve ever had.” But he has been fortunate to have built a strong staff, and he added that one of his challenges is to get out of their way.

Looking ahead, Huckaby is non-committal about how many more years he’ll be chancellor. But he hopes he has helped change the culture at the University System.

“The theme of change is one we adopted right out of the box,” Huckaby told Rotarians on Aug. 3. “There’s a new normal. The way we had been doing things could not be the status quo. I don’t mean we move to a new status quo. The new normal is dynamic and ever-changing.”