Furniture retailer Havertys will celebrate its 135th anniversary on Dec. 4 at a dinner at the Atlanta History Center.

It is a feat few companies will ever achieve. In fact, executives of Haverty Furniture Companies Inc. believe it is the oldest publicly-traded company in Atlanta that has operated continuously in its hometown. Atlanta Gas Light used to hold that title, but it was acquired by Southern Co. in 2015.

Havertys has survived thanks to a successful transition of leadership from its founders to four generations of family members – as well as luck.

“We were listed in the NYSE on Oct. 8, 1929, three weeks before the stock market crash,” said Clarence Haverty Smith, the company’s chairman, president and CEO. “We were lucky in 1929, and we got our cash.” 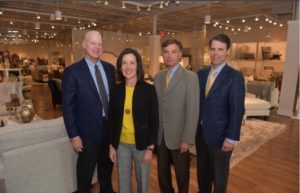 Through the third quarter of this year, the retailer’s sales have been relatively flat, but Smith said the company has continued to be profitable. In 2018, it had about $818 million in sales and $31 million profits.

“We have been profitable every year except two years during the Depression, one year during World War II and then in 2008,” said Rawson Haverty Jr., a senior vice president over real estate and development. “We are pretty optimistic about what’s ahead. We have been investing in technology. We are going to be winners. A lot of that has to do with treating our customers right.”

Customers can come in a showroom where they can receive free design services and the ability to visualize how furniture will look in their homes. Unlike many other retailers, Havertys is banking on its future as a retailer with physical showrooms. Only 2 percent of its sales comes from online purchases.

“Bricks-and-mortar stores will be important in the furniture business because people like to touch and feel what they’re buying,” said Smith, who has been CEO for 17 years and has continued to be known for its customer service. “We deliver all our furniture ourselves with our own trucks.”

The company only sells its own brand of furniture, and it has outsourced the credit side of its retail business so it has no debt.

Smith did say the company has been impacted by the 25 percent tariff hike on imports from China, and it has been shifting some of its production to Vietnam. “It’s been a challenge for the whole industry,” he said.

Smith explained there are two kinds of shares – Class A and common shares. The family controls the Class A shares, which is the voting stock, and it elects three-quarters of its board. If a family member wants to sell its shares, he or she can convert it to common stock.

“We don’t have economic control, but we control the voting shares,” Smith said. “All that does is protect you in a downturn. If the stock gets really low, it protects you from being acquired.” 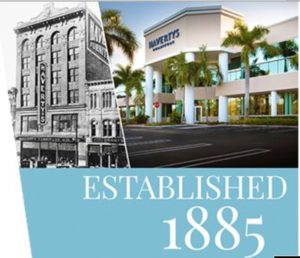 The company was founded in 1885 by J.J. Haverty, son of Irish immigrant Thomas Haverty, who found his way to Atlanta as a railroad worker. J.J. Haverty, who had dropped out of high school to work for retailer Morris Rich (founder of Rich’s) opened his first furniture store in downtown Atlanta in partnership with his older brother, Michael Haverty.

J.J. Haverty had five sons and five daughters. While all the sons entered the business, only one was successful – Clarence Haverty. The younger Haverty became president in 1938, and remained in that role until 1955, when Rawson Haverty Sr. became president.

“We have been part of Atlanta from the very beginning,” Rawson Haverty Jr. said. The Havertys helped found the Community Chest (now United Way of Greater Atlanta), the High Museum of Atlanta; and Rawson Haverty Sr. was the first board chairman of MARTA. He also was a neighbor and friend of legendary Atlanta Mayor Ivan Allen.

Members of the fifth generation of Havertys work for the retailer, and one of Rawson Jr.’s nephews – Patrick Glover –  is managing a store in Anniston, Ala.

Havertys remains a true local company with all of its directors coming from Atlanta: The lead director is John Glover, and the others are Vicki Palmer, retired from Coca-Cola Enterprises; Al Trujillo of the Georgia Tech Foundation; Allison Dukes of SunTrust Banks; Mylle H. Mangum of IBT Holdings; and Thomas Hough, who is retired from Ernst & Young.

“I think we have the best board in the city,” said Smith, who added that it’s easy to bring everyone together because it’s an “all Atlanta board.”