If you agree on the need for more housing options for those of lesser means; want to do more than plant a yard sign to address systemic racism; and decry the yawning wealth gap between black and white households in Atlanta, then here is an action that will change the trajectory regarding housing supply and racial justice, while building net worth. It is single-family zoning reform, a zoning type covering 63% of the land area of the City of Atlanta. 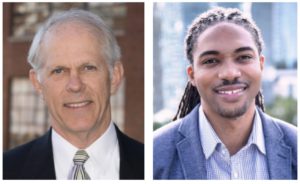 This technical yet intensely local issue is getting attention for good reasons. Housing supply of all types in the city is in short supply, but especially that considered affordable. Typically, affordable housing requires a large infusion of public subsidy (equity) to close the gap between relatively high housing costs and what a low-to-moderate income household can afford to pay for housing. That subsidy comes primarily from federal tax revenues but also local property taxes.

Unfortunately, counting all sources, the sum is grossly inadequate to address the growing need. Zoning reform in Atlanta can make available more land in one of the least dense major cities in the country for additional housing in a way that will require no subsidy and no tax increase. 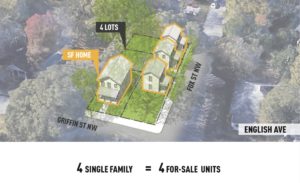 This rendering shows how additional houses could be located on property next to existing houses in Atlanta’s English Avenue neighborhood. Credit: Kronberg Urbanists + Architects

In the case of housing, systemic racism is far from abstract or only an historical artifact. One can draw a straight line from the 1929 zoning map of Atlanta, one of the original and blatant manifestations of Jim Crow, to distressed communities of today, which have long suffered from the debilitating effects of forced isolation and disinvestment, resulting in the pattern of segregation we see today. This legacy of Jim Crow is the very definition of “systemic racism”. The line goes in reverse direction to those fortunate to live in Atlanta’s more exclusive single family zoned neighborhoods, where housing values have benefited enormously from this public intervention that has massively restricted housing supply.

Recently, Atlanta Mayor Keisha Lance Bottoms has followed the announcement of a $100 million Housing Opportunity Bond with a call for zoning reform. Commissioner of Planning Tim Keane and Chief Housing Officer Terri Lee have compiled an inspiring and compelling vision for this in the Atlanta City Design Housing. 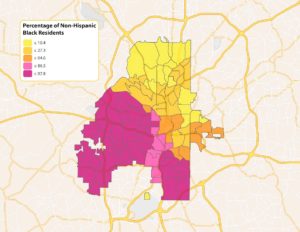 With the supply of affordable housing so low and the demand for affordable—or “missing middle”—housing so high, homebuilders, public officials, urban planners, and advocates agree on the acute need for zoning reform. The City of Atlanta has taken steps to move in this direction, but more is needed. While fully overhauling zoning will take years, we cannot wait that long to address the housing crisis facing us. We need to demonstrate workable improvements now.

The modest but elegant proposal is this. In areas currently zoned single-family, in addition to already allowed detached “accessory dwelling units” (ADUs), allow as eligible uses attached forms of add-on units such as basement apartments. In some older neighborhoods, such housing is grandfathered in, but in most areas such housing is illegal today. Going even further, we could look to modify some of the more racist language that still exists in our current zoning ordinance. Every single-family lot in Atlanta is currently allowed to have a detached guest house on its property. These structures are prohibited from having stoves and are only legal for short-term occupancy if they house “servants or watchmen”. Allowing our servants and watchmen to have stoves in their guest quarters would be an equitable step forward. Even better would be to open the availability for people other than staff to live in these quarters longer term.

This proposal does not consider large rental developments nor will it trigger a deluge of new neighbors into areas now zoned exclusively single-family. Any such allowed additions are voluntary. Rather, the proposal would result in a smattering of additional units scattered across existing neighborhoods. Multiplied across the city, however, the impact on affordable housing supply could be substantial. In addition, this type of housing will deliver additional rental income to the homeowner to build net worth and compensate for rising property taxes, and it will create jobs as small builders and developers responds to the opportunity. 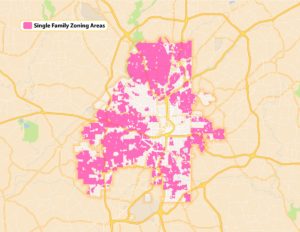 Almost 60% of the land in the City of Atlanta is zoned for single family detached houses, according to City Planning. Credit: Atlanta

Civic and business leadership of the proposal will be crucial, as this proposal will undoubtably trigger one of the distressingly familiar dynamics of policy change– that many people will be supportive in the abstract while finding ways to be against it in their own backyard. In fact, it might never happen without vigorous leadership and a sustained educational campaign, which allowed Minneapolis—not exactly a poster child for equity issues—to abolish exclusionary, single family zoning last year for these same reasons. Closer to home, Durham, N.C. recently passed similar zoning reform that enables key incremental changes like smaller lot sizes and fee-simple ADU lots. However, at this point WE THE PEOPLE hold the final key to unlocking this reform by supporting current efforts by the city and affordable housing advocates like HouseATL and the Atlanta Regional Housing Forum.

Atlanta, like much of urban America, is finally confronting head on issues that have retarded economic growth, social mobility, and racial justice. In a city with low density, restrictive zoning policies, and an increasingly affluent population bidding up housing prices, single family zoning reform is a systemic reform. It is that rare policy prescription that will cost the public treasury nothing, induce more affordable housing to be developed by the private sector, and most importantly, begin to redress a shameful wrong. Zoning reform is not a silver bullet, but it is a necessary, foundational tool to confront an increasing set of housing challenges that will require every tool at our collective disposal.

Bruce Gunter’s advocacy for policies that will increase needed housing production is informed by more than 30 years experience in developing a wide range of housing, mostly affordable and mixed-income.

Joel Dixon brings 15 years of sales and business development experience in high technology and real estate to his role as principal with Urban Oasis Development, where he has developed in the market rate and affordable housing sectors. 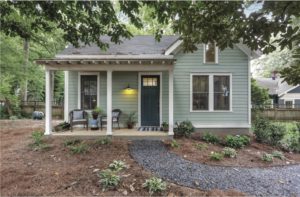