By Maria Saporta
As published in the Atlanta Business Chronicle on July 31, 2015

Newell Rubbermaid Inc.’s decision to move its corporate headquarters a quarter mile — from one side of Georgia 400 to the other — is in keeping with the new focus of the company.

“The transformation we are trying to achieve here is to go from a holding company to more of an operating company,” said Michael Polk, who became Newell Rubbermaid’s president and CEO in July 2011 — exactly four years ago. “We’re becoming a brand-centric, innovation-led company.”

Newell Rubbermaid announced the move July 22. One of the Fortune 500 (No. 455), the company is best known through its various brands, which include Sharpie, Paper Mate, Dymo, Expo, Waterman, Parker, Irwin, Lenox, Rubbermaid, Levolor, Graco, Calphalon and Goody.

When Polk became CEO, those brands were part of 13 autonomous business units.

Polk restructured the company into five business segments — going from 13 presidents, one for each business unit, to five. Those five segments are writing, tools, commercial products, home solutions, and baby and parenting. 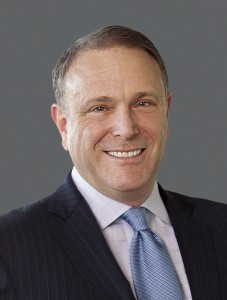 Newell Rubbermaid has been strengthening each of its brands through product performance and state-of-the-art design. It also has been shifting its operating dollars by flattening its management structure and emphasizing marketing and advertising.

The new headquarters will only accelerate that transformation, Polk said. The new building, which Newell Rubbermaid will own rather than lease, will be “much more collaborative, technology-enabled and open.”

“We currently live in a building that is structurally bound to be a corporate headquarters of the 1990s. Each floor is basically a racetrack,” Polk said. “In the new building that we bought, we will be creating a collaborative environment that is indicative of a brand-led company.”

Polk said there will be a more open floor design — often replacing traditional offices, and spaces will be divided up into “neighborhoods” around the different brands to encourage greater interaction among its employees.

There also will be cost-savings associated with the move. Polk said the current building “is an incredibly expensive building” because Newell is only occupying 60 percent of the space. “It would have cost us a fortune” to redesign the existing headquarters, he said, and it did not make sense to put that kind of investment into a building that it did not own.

When the new building became available, Polk said it made sense to move. “It doesn’t require everybody having to move (their residences),” Polk said. “It doesn’t disrupt the workforce. And it’s the right size.”

Today, Newell has about 900 employees based out of its headquarters. But less than 600 “badge in” every day, Polk said. “The new building will be a blended environment and have more open space environment rather than traditional offices.”

Many of Newell’s headquarters employees also are given the option to work remotely, reflecting the changes in technology. The new building will be fully equipped with the latest teleconferencing technology.

And although there will be about the same amount of space for conferencing, the new building “will be far more intimate.” The company selected the architectural firm of Perkins + Will to help it design an open floor environment that would have meeting spaces — both indoors and outdoors.

An added bonus is the building’s proximity to MARTA.

“It’s clearly much closer to MARTA. It’s walking distance,” Polk said. “That’s an additional advantage. It’s easier to get to the airport. And its easier for our visitors to come to us.”

Because of the advances in technology and his views about companies staying close to consumers, Polk does not see Newell shifting many more employees to its headquarters. It did move the marketing team for the “writing” business segment to Atlanta from Chicago last year. But he does not like to “disrupt” the lives of Newell’s employees — which total about 17,500 worldwide.

“Our energy is about talent acquisition and focusing that talent on the brands,” Polk said. “I don’t think co-location is necessary to achieve what we want to create. We have the technology and the ability to connect. And our footprint is becoming more global.”

That said, Polk said the company never considered moving its headquarters from Atlanta when it made the decision to move to its own building.

“Of course it would have been a lot more efficient to have landed in Georgia,” Polk said.

The restructuring or refocusing of the company is built around a “Growth Game Plan,” which Polk said is beginning to take hold. Its sales growth has gone from 2.2 percent in 2011 with steady gains every year to reaching 4 percent in the first quarter of 2015.

The stock (NYSE: NWL) also has responded. Polk said the stock price hovered around $11 a share during the third quarter of 2011 and is up to about $42 a share today.

But Polk said it’s still early in the game. He compares Newell’s transformation to a baseball game in the top of the fourth inning.

The company plans to move to its new building in the first half of 2016. The new building will not have a large auditorium, and Polk said the decision has not yet been made whether it will have a company store featuring Newell’s products. That store exists in the current headquarters, but Polk said he would like to make the company’s products more accessible to employees working worldwide.

It is all part of Polk’s philosophy that the company be less focused on its headquarters and more focused on the market and consumers.

“it’s not about buildings. It’s about the brands — and technology is allowing us to operate virtually and in a connected fashion,” Polk said. “The real emphasis ought to be externally facing, not internally facing.”

On a personal note, Polk has bought a residence in Buckhead, but his family is still living in New Jersey. He described his marriage as a Brady Bunch union: he had four kids and his wife had three, and they still have four children in high school.

“We have moved them all over the world, and they kind of put the kibosh on any more moves,” Polk explained. “Until they all fly the coop, we will be living this lifestyle.”

Meanwhile, Polk has been impressed with Atlanta’s business leadership. He served as chairman of the Metro Atlanta Chamber’s Business and Higher Education Council, which he said has now morphed into an “Innovation and Entrepreneurship Council.”

“One of the great things about Atlanta is how engaged the business community is,” Polk said. “That’s different than other cities where I’ve worked. This is an innovation-led city.”

Polk also serves on the board of trustees of Morehouse College, and he described Atlanta as trying to grow from a Southern city to a global one.

“It has the potential of becoming one of the most exciting global cities in the world,” Polk said. “But the city and the state need to work together to make sure that that takes place.”

Polk said metro and state leaders will need to focus on the “remarkable assets” that exist — citing higher education, technology and the life sciences as examples.

“You don’t want to ever give up the Southern heritage of the city,” Polk said. “But there is an opportunity for Atlanta and Georgia to be recognized differently that it is today.”