Movie Review: Humanity in the ‘Dawn of the Planet of the Apes’

The new “Dawn of the Planet of the Apes” movie, which debuts in theaters on July 11th, starts the same way it ends; with a close-up shot of an ape so close it can be mistaken for human.

This is the real question that tugs throughout this movie, one that vegetarians probably struggle with constantly: if given intelligence, would animals be the same as us? Well our hairy brethren who share most of our DNA are CGI (computer-generated images), and for the first 10 or 15 minutes, I was disappointed and fearful that this movie would become wrought with the lure of showing off clever computer animation, and less about story. 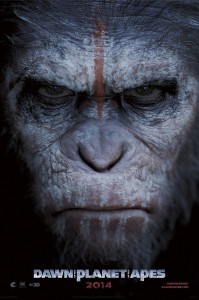 “Dawn of the Planet of the Apes” movie poster

Well that opening segment is the only part of the movie where that statement rings true. The rest blew me away.

I must say that this was as refreshing as summer rain. Amongst the onslaught of summer blockbusters that turn comic book franchises into the Hollywood elite, this summer blockbuster’s mega-budget went towards a smart, creative and original script.

There are some qualms I had with this film; some major and others minor, (some of which I will mention below), but each and every one of them are forgivable. That is because this movie is a good film. It is well worth your money. You can look at it as either contributing to a great franchise or making a foothold that summer blockbusters are not reserved only for crime fighters with mega-budgets.

This movie is much more than good vs. evil. It transcends it and asks a question that is worth discussion: Does humanity come with intelligence?

The director has an answer for you, and it is worth finding out how he says it.

I have given my recommendation, and that is all I have to say to those who have not yet seen this movie.

To those who have, I can share with you some of the mistakes that I saw with the film. First and foremost, the ape encampment is sight distance away from the human encampment. Maurice says assertively there are probably no humans left because they haven’t seen them for two winters.

With the location of the human encampment being just over San Francisco’s Golden Gate Bridge, it is asinine that the apes would think with any degree of certainty that there are no humans left when they are firmly established in the closest nearby city.

Also, all of the human’s hair seems way too well maintained for a dystopian society, and on the same note of dystopia, there is a camcorder entrenched in dust, but the camcorder screen is unblemished.

There is more of this and that, but the mistakes are not worth listing in detail. That is because this movie supersedes others I have seen recently while remaining visually spectacular. It is one of few I may even recommend 3D; just because it will immerse one more into the film, and its beautifully created world.

I hope you have enjoyed, or will enjoy, this film as much as I did.

Note to readers: David Luse, who works in the film industry, currently is the assistant location manager-location scout for Triple Nine, which is being shot in Atlanta. David, who is the son of Maria Saporta, is an occasional contributor to SaportaReport.