I voted for More MARTA, not less MARTA

I voted for More MARTA, not less MARTA. And like me, so many of you did too.

More MARTA, the 40-year program funded by a half-penny tax to fund transit in the City of Atlanta, passed in 2016 with 71 percent of the vote. And ever since, Atlanta’s citizens have been paying to implement the plan. More MARTA provides a chance to leverage our existing rail system to achieve last and first mile connectivity for people in all of Atlanta’s neighborhoods.

In More MARTA, four rail projects including the streetcar extensions west and east to the BeltLine, BeltLine Rail from Lindbergh to Bankhead, Campbellton Road light rail transit (LRT) to Greenbriar, and the Clifton Corridor LRT to Emory form a system rather than a collection of individual routes, offering easier and more direct routes and transfers that save time and extend the reach of each project. Together with three bus rapid transit (BRT) projects that connect to MARTA’s system, these new rail lines would become the backbone of a city dedicated to a green future and the possibility of a full life here without the need for a car.

But this summer, we are witnessing the scaling back of the plan. It need not be that way, and there are signs of hope and opportunities to get back on track right now. 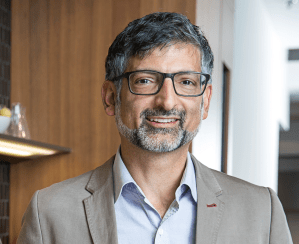 A resident of Midtown Atlanta, Matthew Rao is a leading kitchen and bath designer, founding and operating RAO Design Studio in Midtown since 2005. A resident of the City of Atlanta for most of his life, Matthew has taken his passion for design to other areas outside the world of kitchens. He serves on the Advisory Board of the Atlanta Community Food Bank and as chair of BeltLine Rail Now.

In May, MARTA gave its first public accounting of how it has spent the $367 million in More MARTA sales tax revenue so far. It came as a shock that nearly two-thirds of the money has already been spent on bus operations and bus service extensions — mainly frequency enhancements — leaving only about $134 million on hand for capital programs. Why does this matter? Because bus improvements over 30 years were only supposed to cost $238 million. It is unclear how much more bus service Atlanta has today than it did in 2016, before More MARTA.

In June, MARTA adopted a new budget that continues the present pattern of spending. Also this summer, the MARTA Board voted to downscale Campbellton Road LRT to BRT, saying that bus rapid transit provides a “rail-like” experience at far less cost and in much less time to build. Many local residents and supporters of More MARTA were dismayed and disillusioned. The point of Campbellton Road LRT has always been to bring investment, development and jobs to the community in addition to serving existing riders better. LRT would provide faster service, increased capacity, and has been shown to deliver more development than BRT. The permanent nature of rail infrastructure is seen as something people can count on now and in the future. Also announced in June, MARTA is taking steps to change the preferred alternative for the Emory line from LRT — long the choice — to BRT.

If MARTA can no longer afford to deliver all of More MARTA, why not just say it out loud? We deserve that truth. There hasn’t been a better time since the 1970s and 80s to apply for federal matching dollars, upon which nearly all big-city transit projects depend for up to half of their total project cost. We are in year two of the five-year Biden Infrastructure and Jobs Act, which provides an additional $23 billion in transit funding. Other cities won out in year one, but there are still four years of grants remaining before funding levels drop again. It’s time to get busy and get ready to apply for our share. In Atlanta, we must create new local revenue sources beyond the sales tax. Few cities rely solely upon sales taxes for the local portion of the cost of transit projects. We won’t be able to build More MARTA unless we enlarge the revenue pie. 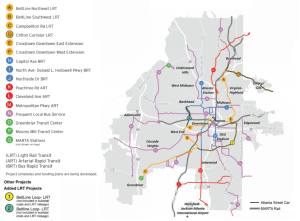 So, what can we build by the time the World Cup and the eyes of the world arrive here in 2026? For sure, Summerhill BRT will be up and running, but we can also have trains operating on the BeltLine. In June MARTA and Atlanta BeltLine Inc. (ABI) announced that they had reached the 30 percent engineering milestone for the streetcar extension to Ponce City Market, which includes the first section of BeltLine Rail. This significant achievement means that the project can move forward. What it needs now is the leadership of Mayor Dickens to press for the next steps immediately.

ABI has announced a request for qualifications to award $3.5 million, with $700k of that coming from the City and $2.8 million from the federal government, to study all of the BeltLine rail corridor that MARTA has not previously studied, from Lindbergh counterclockwise to Memorial Drive. This puts the promise of delivery of BeltLine rail to the west and south sides one step closer. Rail on the “J” of the BeltLine is projected to serve an estimated 31,000 riders per day. And that projection was made before Microsoft and others started construction at the emerging tech hot spot near Bankhead.

By 2050 the population of the City of Atlanta is projected to double, reaching up to 1.2 million people, with nearly 25 percent of them living in the BeltLine tax allocation district. The private sector has invested billions of dollars in the BeltLine corridor so far, and the city is enjoying the trail, parks, and other amenities. But the resulting development has brought increased traffic congestion and pollution without delivering the critical element of rail transit, which has always been part of the plan since day one. To relieve the gridlock, promote equity and connection, and take an important step toward combating climate change, we need more people riding the greenest form of transit we can build — electrically powered trains.

The light rail and streetcar projects in More MARTA represent a one-time investment in the permanent infrastructure future of the city. In corridors like the BeltLine, with its dedicated streetcar right-of-way of tracks in a grass rail bed, the 15 to 20 percent higher construction cost vs. BRT will be more than offset by lower maintenance and operating costs. Rail also provides much higher capacity and speed than buses. In the end, the beauty, the green qualities and the aesthetics of the BeltLine are supported by rail and not by paving a new 22-mile road.

Atlanta needs the benefits we can achieve through building all of More MARTA. The World Cup is coming in 2026. Our city is a finalist to host the Democratic National Convention in 2024. With a world-class transit system, we would have a better opportunity to host more such events and to make Atlanta the truly international city it can be.

I voted for More MARTA, not Less MARTA, in order to bring first-class transit to areas that have suffered from disinvestment and under-investment for decades and to connect all of Atlanta’s citizens to needed resources and to each other. The best time to have made these investments was years ago, but the second best time is right now.