IllumiNights at the Zoo: A whimsical ode to the natural world

There are over 100 lanterns displayed in the Zoo, including this glowing underwater world. (Photo courtesy of Zoo Atlanta.)

Zoo Atlanta typically houses over 1,000 animals and 200 species on its 40 acres, but this winter, another 100-plus animals have been added to the mix. From now until mid-January, folks can visit after dark to see a different take on flora and fauna from all over the world. 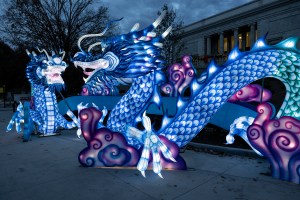 IllumiNights at the Zoo: A Chinese Lantern Festival is an outdoor, immersive experience that shows the animal kingdom through intricate, glowing lanterns. For a few winter months, the real animals at Zoo Atlanta will live alongside their lantern counterparts. In this playful exhibit, visitors are immersed in a glowing version of the environment around us.

Zoo Atlanta partnered with Hanart Culture to craft this outdoor experience, and the theatrical entertainment company provided the lanterns and LED lights. Lantern artisans created the displays — which can take weeks or months to complete — in Zigong, China, called the “Lantern Town of the South Kingdom” because the city’s lantern festival celebrations can stretch into a month-long event. The Lantern Festival honors ancestors who have passed away and marks the first full moon of the new lunar year and the end of the Chinese New Year. The upcoming holiday will be celebrated on Feb. 5, 2023.

This is the second year of IllumiNights at the Zoo, and a majority of the installations are different from last year’s debut show. Upon arriving, visitors are welcomed into the holiday spirit with a sky-high Christmas tree and two blue lantern dragons that line the entrance.

There are over 100 lantern displays integrated into the park, leaving every corner illuminated. Sometimes the lanterns stand alone, and other times they’re blended into the surrounding natural landscape. In one section, two real trees are adorned with glowing sloths that hang from the branches. 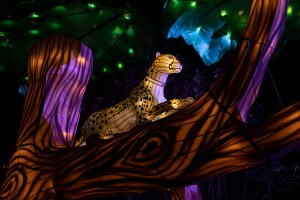 The cheetah watches over the walkway. (Photo courtesy of Zoo Atlanta.)

Passing through the African Savanna section of the Zoo, while most real animals have tucked away for the night, visitors can see top predators on full display — a long, slithering python draped over a tree branch or a cheetah lounging in the treetop.

“Going through the Zoo at night is a different journey, you’re able to see things in a different way,” Smith said.

There are also holiday classics, like Santa’s sleigh being pulled by two reindeer, resembling an extravagant front-yard display. In the spaces between lanterns, many trees are covered with string lights. 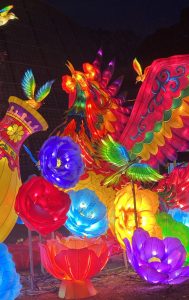 Smith identified a few large-scale displays that easily catch your eye. Outside of the amphibian and reptile complex sits a brilliant display of light and color — a larger-than-life phoenix. The blazing bird display boasts a tail made of pink and purple flames, surrounded by multi-colored flower blooms and ornaments.

The Panda Path is also a sight to behold. The walkway has been transformed with cherry blossom trees, bamboo and, of course, pandas. There are also nods to the plant world, including a cacti walkway that glows green and vibrant coral in an ocean display.

When crafting the exhibit, the team purposefully chose a wide range of ecosystems, Smith described, as a way to “celebrate the biodiversity of our planet.” She encourages folks wanting to see another version of the Zoo — by night, in a different light — to visit after dusk.

IllumiNights at the Zoo is running from now until Jan. 15, click here to learn more.