In a screwball campaign, the shape of things to come 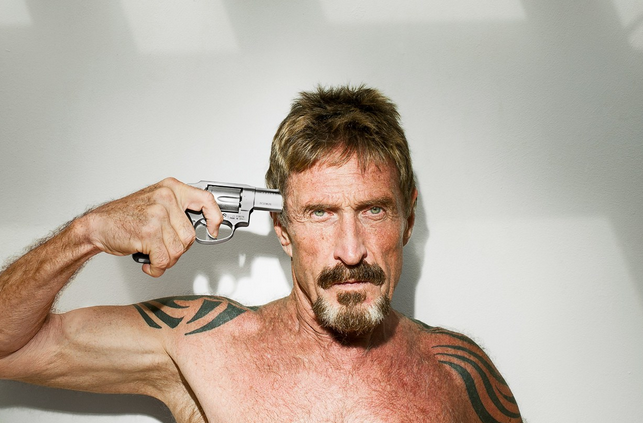 In another year, you figure, John McAfee’s screwball campaign for the presidency would be getting more attention than it has so far.

McAfee, who announced his candidacy as head of the newly founded Cyber Party last week from his headquarters in Opelika, Ala., would be perfect copy fodder in a slow season. The founder of the computer antivirus company bearing his name which Intel bought and ultimately rebranded following a string of lurid stories about McAfee’s exploits in Central America, over the course of which the tech entrepreneur has lost almost his entire fortune.

“I lived in a Third World Banana Republic, was tortured and had to watch my dog shot in front of my eyes by a soldier trained by the FBI at Quantico using an Ar-15 supplied by the US Government,” McAfee writes on his campaign website.

This is a year in which a real estate magnate-showman is leading the Republican field with a retired neurosurgeon nipping at his heels, and the presumptive Democratic nominee is getting her clock cleaned in the polls by a guy who only recently started identifying himself as a Democrat. It takes even more than an Uncle Duke for the digital age watching his dog get shot in a Central American dungeon to make an much of an impression.

We can’t completely ignore what McAfee last week promised will be “an entirely new type of campaign,” however, because, more certainly than the campaigns of any of the single-digit Republicans or Democrats, it could be the shape of things to come.

McAfee, who’s involved in a tech incubator in the town near Auburn University, said he will use Opelika’s one-gigabyte fiber optic capability to run his campaign entirely over the internet, with digital fireside chats and direct interactions with voters. His campaign slogan is “Privacy, Freedom and Technology.” 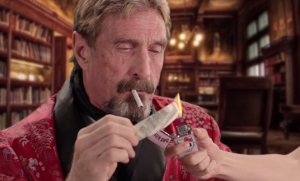 McAfee was frustratingly vague about the issues in a Fox News interview,  but even burned-out ex-millionaires have their sweet spot, and when McAfee argues that a government which allows hackers to get their hands on the records of 21 million current and past federal employees is technologically incompetent, it’s hard to differ with him. You might not trust him to fix the problem, but he has a point.

And that, as much as any of the technological trappings of his campaign, is why McAfee could be a harbinger of candidates to come. It is becoming progressively harder to mount a full-service president campaign: polish a message on all the issues, raise the money, hire a team, raise the money, develop the media strategy, raise the money. But everybody knows something about something.

That leaves the future to a simpler kind of candidate, a dice-roller who leverages some combination of targeted message, name identification and technological edge into a full-blown campaign.

That’s essentially what Donald Trump has done already, with the immigration issue and his command of the TV cable shows. There’s no reason to assume from Trump’s spectacular poll numbers that the best example of this type of candidate isn’t yet to come. He, and McAfee, may only be the pioneers.

The two great brakes on a cascade of such candidates are the custom of drawing candidates from the ranks of governors and members of Congress, and the party system. Neither is in very good shape.

Republican voters may yet come back on the reservation and choose from one of the previously elected candidates, but at the moment their disdain couldn’t be more pronounced. The party system which exists to support these more traditional candidates is perhaps the biggest loser of all this year, with the two parties cratering in their separate ways.

The current role of the parties in the election process was epitomized by GOP Chairman Reince Preibus leaving the building — which in this case happened to be Trump Tower — after obtaining Trump’s pledge not to bolt the party, so as not to be involved in the candidate’s press conference.

Except as the thinnest organizational framework for a celebrity’s ambitions, the party was invisible. Imagine where the parties might be another few cycles down the road.