Winston is the author of “The Big Pivot: Radically Practical Strategies for a Hotter, Scarcer, and More Open World;” as well as the best-selling “Green to Gold” books.

Though he didn’t say it explicitly, Winston would probably rephrase Anderson’s question and ask: “What is the business case for saving life on earth?” 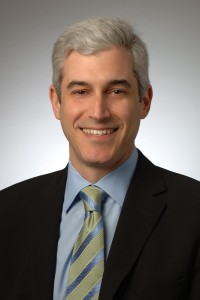 The eerie part of Winston’s message, however, was how similar it was to the one that Anderson had begun preaching in 1994 – 20 years ago when he was the CEO of Interface, a carpet tile manufacturer.

Anderson would tell audiences that he had just read Paul Hawkens’ book: “Ecology of Commerce,” and all he could do was weep. He realized that his company had been part of the problem – not part of the solution.

But Anderson quickly set Interface on a path to become as sustainable a company as it could. More importantly, Anderson became a national advocate in the corporate world to urge other companies to do the same.

He was convinced we were running out of time to clean up the earth and fix the damage that mankind had made in a relatively short period of time.

The power of Anderson’s message is still with us – evidenced by the second annual “RayDay” that occurred on Sunday, Oct. 5 at Serenbe when hundreds of Anderson followers and admirers celebrated his life and vowed to continue his legacy. Anderson passed away in 2011 from cancer.

Since 1994, during these past 20 years, has our world heeded Anderson’s call for environmental cleansing?

To listen to Winston, it has not. There have been incremental improvements – companies that have established sustainability programs, initiated novel ideas of how to improve their businesses and reduce their global footprint.

Ray Anderson – may he rest in peace

But the bottom line from his Visionary talk is that we are still waiting for the “wake up call” — the call that will force us to radically change our behavior and dramatically shift or accelerate our progress.

“Climate change is a serious issue that is already costing us billions and billions of dollars,” Winston said. “We are living in a hotter, more volatile world.”

Demographic forces make it also more complicated as more and more people are moving to cities and entering the middle class.

“In one year, China built 17 billion square feet of new space,” Winston said. “That’s the equivalent of 30 Manhattans. We are seeing a fundamental shift in how our world works.”

Winston, however, is not a doomsday kind of guy. Although he knows that a dramatic shift will inevitably cause the end of some industries, he believes – as does Richard Branson – “that this is the wealth-creating opportunity of our time.”

The clean economy market is a growth opportunity, and Winston said that companies prepared to embrace the change and seek the business potential from a more sustainable future will be the ones that will succeed.

Meanwhile, we are losing ground everyday, Winston said. We need to de-carbonize our economy. by 6.2 percent per year in order to protect our planet, but currently the world is de-carbonizing at 1 percent a year. Every year that we don’t meet the 6.2 percent goal, we fall further behind, he said.

Some companies are taking the right approach. Kingfisher, the British version of the Home Depot, has an initiative encouraging people to build homes that generate more energy than they use.

Closer to home, Winston favorably singled out the Coca-Cola Co. and PepsiCo – two of the fiercest competitors in corporate America – for collaborating on the development of new cooling machines for their beverages that don’t use hydrofluorocarbons (HFCs), which are extremely harmful to the environment.

“This very careful partnership to explore new technologies has given suppliers confidence that a market will be there for them,” Winston wrote in his book. “The Big Pivot means calling a truce with enemies on the big issues….”

One of the most telling moments of the night came when Atlanta Mayor Kasim Reed received the annual Argon Award from Southface – presented to him by Rutherford Seydel, a friend of the mayor who has worked with him on the Better Business Challenge, the Chattahoochee River and as an owner of the Atlanta Hawks.

Upon receiving the award, Reed said he was deeply moved to be given an award by people he deeply respects and likes so much as those attending the Southface dinner, especially founder Dennis Creech.

He went on to pledge that Atlanta was “just getting started” in becoming a model city for sustainability.

Speaking of compassion, a special touch of Sunday’s RayDay celebration was how dozens of Anderson’s quotes were placed on signs throughout the grounds – words of wisdom from one of the original corporate environmentalists who now lives on through his foundation.

The signs with his quotes were the brainchild of his daughter, Harriet Langford, who seemed delighted by the success of the second annual RayDay — not held on his July birthday this year, but on a wonderfully crisp summer-fall day that Anderson would have loved.

Here are many of those quotes for your enjoyment:

Previous Article
The watch on the frontier of infection
Next Article
Is There Hope For Haiti?