Armed with 35 years of experience leading public housing agencies in the United States and Canada, Atlanta Housing CEO Eugene Jones knows politicians — from the local level to the upper echelons of government — don’t focus nearly as much on ensuring their constituents are sheltered as they should.

With his new book “Housing Humans,” though, he aims to spotlight the systemic inequities that for decades have perpetuated a widespread affordable housing crisis, and to identify potential remedies public officials can utilize to tackle such issues.

“Throughout my career, affordable housing has never gotten the attention it deserves from either political party leaders,” Jones writes in the book, which comes out next week. “Now, I hope to induce a call to action that can revamp our nation’s housing policy.” 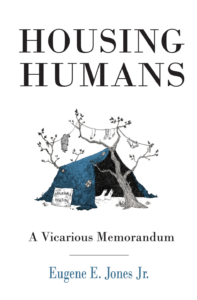 SaportaReport acquired a brief preview of the new book, in which Jones details the journey that brought him to Atlanta, how that shaped his view on the state of the nation’s mounting affordable housing crisis and what needs to happen next to ensure our most vulnerable populations aren’t left out in — or forced out into — the cold.

“It is time to move urgently into action in creating not just housing but resident-focused neighborhoods,” Jones writes, adding that the action-oriented civil rights pursuits of the late Dr. Martin Luther King, Jr. and Congressman John Lewis serve as inspirations for his own crusade for housing equity.

“My vision is for a decisive-action, sustained-housing policy reform, organized by both the public and private sectors, and collectively led by like-minded individuals and groups committed to correcting the social injustice of severely unequal access to affordable housing,” he writes.

But the problem deserves more than the attention of like-minded individuals and housing-focused people and organizations, Jones argues.During an election year — and especially amid the COVID-19 era, when a crippled economy has citizens around the country threatened with displacement — the affordable housing crisis should be top of mind for political candidates.

“The affordable housing crisis did not become a significant issue of the 2020 political campaign despite multiple calls to action by reputable homelessness and housing state and national organizations,” Jones writes. “These campaigns, organized via social media and articles written by numerous, credible individuals or research entities, seemingly fell on dead ears.”

If Jones accomplishes his goal with this book, though, the right eyes could turn toward an issue that’s too long been overlooked.