In nuclear war threats, governments once again fail to imagine the unimaginable

An illustration of a nuclear explosion. (Image via the Federal Emergency Management Agency website.)

Exactly two years ago, it was dawning on Americans “temporarily” locked down for COVID-19 that they were entering an apocalypse so unthinkable, so unimaginable, that… well, actually, it was thought of and imagined by everyone except woefully unprepared governments. Pandemics were already a disaster movie subgenre whose cliches initially provided more useful predictive power than the WHO or CDC.

Two years later, and here we go again. Russian President Vladimir Putin has accompanied his invasion of Ukraine with saber-rattling about nuclear war, an apocalypse so unthinkable, so unimaginable, that it’s a pillar of global pop culture rehearsed uncountable times in every possible medium. Indeed, one source of my mental-health coping in COVID-19’s early days was the survivalist theme of the hit World War III video game series Fallout; Metro, a similar, popular series set in Russia, was literally made in Ukraine. Heck, it’s not even the first time Putin has talked about nukes in relation to Ukraine. So what is local government thinking and imagining?

“We have the capability and protocol to issue a notification warning to the public of an imminent attack or accidental missile launch once we are notified by the federal government,” says the Georgia Emergency Management Agency. This is a fancy way of saying they would flip the local switch on ye olde Emergency Alert System, giving you about 10 minutes after your phone or TV beeps to say your prayers until thermonuclear devastation arrives.

What about the City of Atlanta? I got a one-sentence reply: “The City is prepared to respond to [a] variety of contingencies, and maintains strong relationships with our federal and state partners.”

The serious translation here is that nuclear war is the feds’ problem, and indeed, the Federal Emergency Management Agency (FEMA) has a standing plan to activate a “Nuclear Incident Response Team.” FEMA also has long maintained webpages with information about surviving nuclear blasts, in recent years focused on the possibility of terrorism using relatively crude devices.

I don’t mean to alarm you, but FEMA started frequently updating its “nuclear explosion” survival tip webpage on Feb. 25, the day after Russia invaded Ukraine. The initial update was so hasty that FEMA accidentally cut-and-pasted tips about surviving a “flood.” 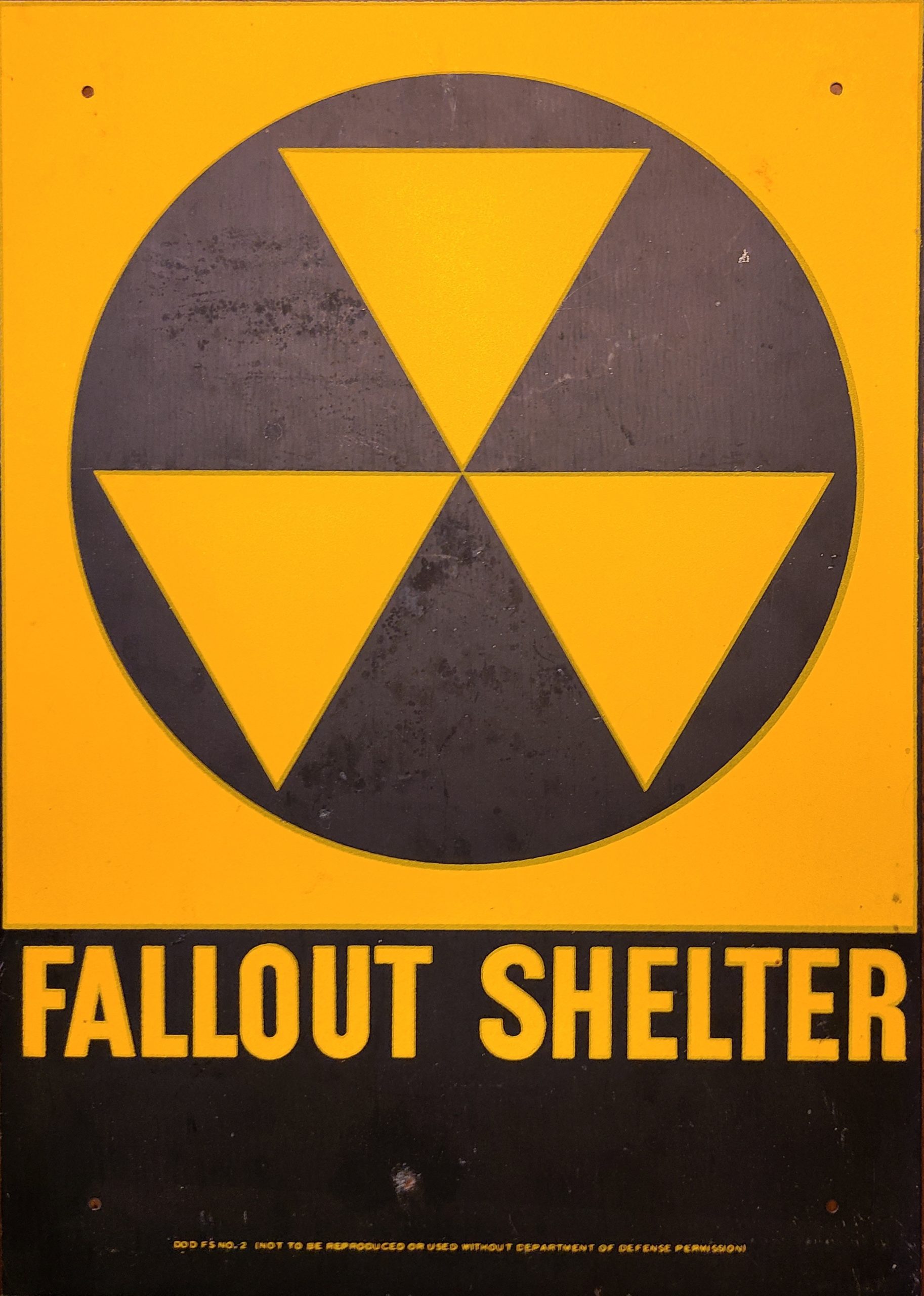 The author’s vintage fallout shelter sign, dating to circa 1988. (Photo by John Ruch.)

I know what you’re thinking. Survival tips are just meant to placate us because no one survives a full-scale nuclear war between superpowers. We sneer at hillbilly preppers and laugh at old ads telling schoolkids to “duck and cover,” but the old Cold War terms are already flying. “Mutual Assured Destruction” means we’re all vaporized by multiple missile strikes. Even if you survive to crawl out of some shelter, climate-altering “nuclear winter” finishes off you along with virtually all animal life. As Soviet Union leader Nikita Khrushchev put it in 1963, the survivors of nuclear war would “envy the dead.”

There’s no doubt a nuclear bomb exploding in a city would instantly murder hundreds of thousands, if not millions, of people within the roughly one to four miles of its blast diameter and injure others farther out with heat or debris. Many living farther out would survive, albeit in a dangerous and disrupted world. But thankfully, no one knows how far nuclear war, due to its very horror, would go in practice on the spectrum of tactical and total, and the science of such concepts as nuclear winter has long been questioned. As you won’t be surprised to learn after COVID-19 controversies, politics often play a role in official proclamations, particularly when the concept of survivability of nuclear explosions is conflated with encouraging or discouraging some lunatic leader from actually pushing the button.

FEMA’s website includes a video of a 2018 presentation by an expert at California’s Lawrence Livermore National Laboratory, which oversees nuclear weapon security, on local emergency planning for nuclear explosions. The expert, Brooke Buddemeier, cautioned against the assumptions of unsurvivability and federal responsibility, which he said could cost hundreds of thousands of lives due to poor preparation and response.

Immediate survival prep he recommends for a nuclear blast is pretty similar to tornado tips: head to a basement or the interior of a large building to avoid the impact, debris and radiation. In what he called “duck and cover 2.0,” dropping down at the sight of an extremely bright flash in the sky is a good idea because it can protect you from debris coming within seconds. The nightmarish post-explosion fallout — debris mixed with potentially lethal radioactive material — can be brushed off and will rapidly lose its radioactivity. After that, state and local emergency responses will be crucial as the federal government itself may have been hit and massive amounts of debris make travel difficult.

A detail of a FEMA fact sheet on survival tips for a nuclear explosion.

None of this would be a picnic, let alone a rationale for the sheer madness of it all. But basic survival tactics and supplies could mean life or death for millions. Governments used to plan for this stuff. The feds had the famous fallout shelter program of the 1960s through 1980s, where basements, tunnels and interior rooms of various structures were stocked with supplies. (A fully stocked shelter was found hidden within the Brooklyn Bridge about 15 years ago.) That program, like many others in a broad, localized civil defense regime, was defunded as relations with the Soviet Union improved and treaties were forged to limit or eliminate nuclear weapons. But nukes haven’t gone away, and the possibility of nuclear terrorism has grown.

Yet, much like the pandemic, it’s hard to find examples of government planning ahead. Back in former Mayor Kasim Reed’s administration, Atlanta had a “chief resiliency officer” partly funded by the Rockefeller Foundation in a program on the trendy concept of “resilience” — how cities prepare for and bounce back from “shocks” like disasters and “stresses” like inequality and unaffordability. The program’s 2017 “Resilient Atlanta” strategy report had some foresight in predicting such shocks as “flooding, infrastructure collapse and cybersecurity threats” — though a cyber attack just months later nonetheless crippled many City functions.

The report was not comprehensive nor a literal emergency management plan, but it’s notable what was not in it. There was no mention of the threats of epidemics or pandemics, even though its steering committee included Dr. Kathleen Toomey, then Fulton County’s health director, an expert on the HIV pandemic already affecting Atlanta who is now well-known as Georgia’s health director under COVID-19. Likewise, nuclear explosions and terrorism aren’t addressed, and the only war mentioned is the one where Sherman paid us a visit.

Georgia and Atlanta officials certainly prepare for many conventional mass-casualty disasters, and it’s tough enough whipping up political capital and funding to prep for speculative threats. But apocalypse-level, society-altering scenarios do happen, as we learned the hard way. We fantasize about them all the time. Heck, when I moved here, the hot TV show was The Walking Dead, aka, the story of a bizarre pandemic destroying Georgia’s civilization.

Surely the leaders of the “Hollywood of the South” can do a better job of imagining the unimaginable.